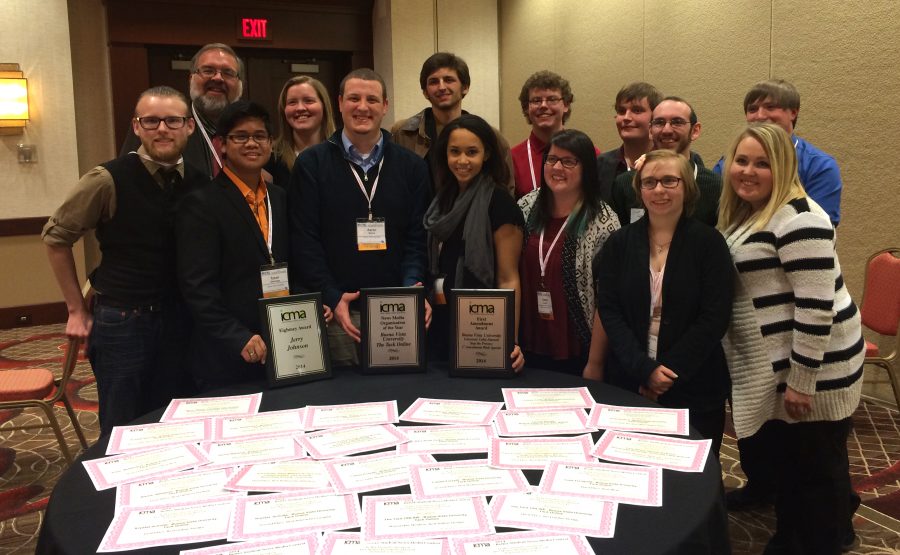 Each year, Digital Media faculty bring a group of KBVU, University Cable Network (UCN), and The Tack ONLINE students to the annual Iowa College Media Association (ICMA) conference in Des Moines, IA. This conference is also held in concurrence with the Iowa Newspaper Convention. Digital Media students are encouraged to submit any form of media work through their experiences working with media organizations on campus. On Thursday, Feb. 5, the ICMA held a luncheon before the ICMA Awards Ceremony. On Friday, Feb. 6, there were organized sessions for faculty and staff members who were given the opportunity to sit in and learn more about media.

Buena Vista University (BVU) was able to take home 29 overall awards from the ICMA ceremony; earning six first place awards, five second place awards, seven third place awards, and eight fourth place awards. In conjunction with these awards, BVU also received high-honors in special categories. The Tack ONLINE was awarded with the News Media Organization of the Year, an award recently changed into a category where competition includes both print and online material. This makes the third year in a row The Tack ONLINE has been awarded this honor. UCN Studios; “Stop the Presses!” created for BVU First Amendment Week won the new First Amendment Award, and BVU Digital Media Professor Jerry Johnson was awarded with the Eighmey Award.

Senior Digital Media major Tyson-Jay Domingo has previously submitted work for the ICMAs, but this was the first year he’s attended the conference.

“This year and previous years, I have had submissions sent from The Tack ONLINE as a co-producer of a multimedia story, which featured my photography, as well as clips from the radio show I co-host weekly called Tassie Takeover,” Domingo said.

While Domingo wasn’t able to take home any awards at this year’s conference, his work has previously been recognized at the ICMAs.

Senior Graphic Design and Digital Media major Aaron Burns has touched base with multiple organizations throughout his time at BVU.

“I am currently the Co-Editor-in-Chief of The Tack ONLINE. Previously, I have served as the News Co-Editor my sophomore year and Graphics Co-Editor my junior year. I was also a staff writer my freshman year. As for other organizations, I was inducted to the Society of Collegiate Journalists (SCJ) as a sophomore and worked as Assistant Production Director for KBVU and Digital Interactive Manager for UCN junior year,” Burns said.

Burns submitted three pieces to the ICMAs this year, winning an honorable mention award in breaking news and also a first place award in multimedia slideshow.

Besides submitting work and attending the ICMAs, Burns also spoke alongside a panel of three other students from different colleges around Iowa. The colleges consisted of: Iowa State University, Simpson College, and Loras College. The panel was called “Not Your Father’s Newspaper: How Media Students Are Adapting to a 24/7 Information Culture”, a session that discussed the challenges of creating content for a changing media culture.

“Like usual, when you’re giving a presentation, you feel like you did a lot worse than you actually did. The panel topics actually flowed together very well. Everyone did great, and I feel like the audience got a lot from the panel,” Burns said.

With 29 awards tucked into the arms of Digital Media students, Domingo feels that this conference has only secured his positive feelings about graduating from BVU in May.

“Honestly, I think I’ve chosen the right program and the right school, and it shows through the awards we’ve received. It makes me feel good that there is going to be a digi legacy that continues to grow and may soon take over BVU before we know it,” Domingo said.

Burns, who will also be graduating in May, feels his time with The Tack ONLINE has strengthened his professional development and has also led him into a variety of directions he never thought possible.

“I want to extent a great thank you to my team for their amazing work and dedication to The Tack ONLINE. This is certainly a tradition that I want to continue—not only to keep the winning streak going but to keep the bigger goal in mind; to bring the students of Buena Vista University the news they want to hear,” Burns said.

Congratulations to all students who were recognized for their work at this year’s ICMA conference.