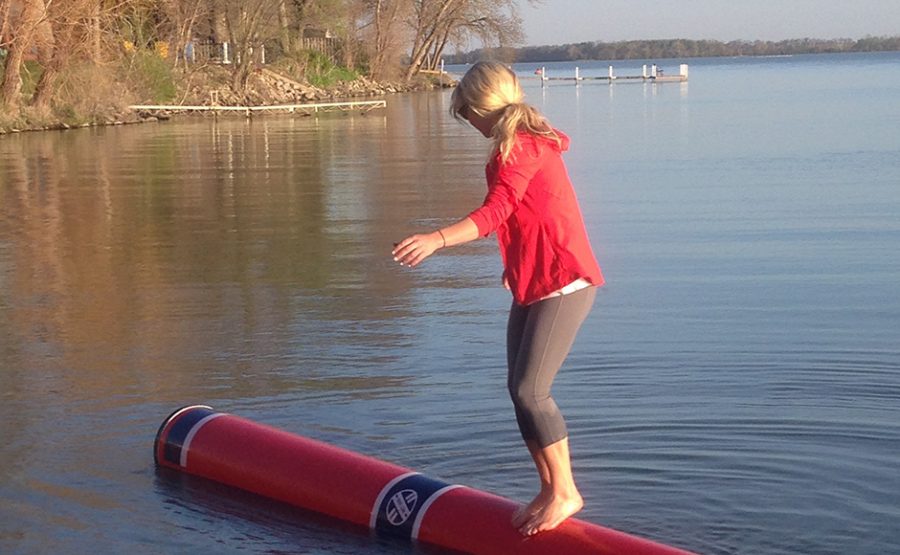 On Monday, April 27, World Champion logroller and owner of Key Log Rolling Company, Abby Hoeschler, gave an ACES presentation and put on a clinic on the lake on Buena Vista University’s (BVU) campus.

Logrolling is a sport that originated during the Great North American River log drive. During the spring melt, lumberjacks would cut the trees down and send them down the river. Then the log drivers or “river-rats” would jump from log to log to avoid a jam. In the evenings, they would challenge each other to see who could get someone to fall off first.

Hoeschler was born into a family of world champion logrollers. It all started when her grandmother wanted something for her mother and uncle to do for fun, so she signed them up for logrolling lessons. Her mother is a seven-time world champion, her uncle a five-time, her oldest sister one-time, her other sister a three-time, her brother a four-time as well as world record holder, and Hoeschler herself a four-time and world record holder.

Hoeschler took up logrolling at the age of four and was hooked even then.

“I started teaching logrolling in middle school on a pond, and then convinced the pool to let me bring one there. That was when I realized I liked working for myself,” Hoeschler said.

Hoeschler attended high school at a New England boarding school, and then college in Vermont. She attended the same college as her two older sisters, who had already convinced the school to create classes for physical education credit, as well as let them put a log in the aquatic center.

“If you asked me at the time what my one true passion was, I certainly wouldn’t have answered logrolling. I would have never expected it to end up being my career,” Hoeschler said.

Hoeschler graduated college with a degree in Art History. She then moved to Wyoming to work at an outdoor company giving logrolling lessons.

“I felt invigorated and inspired teaching and it made these kids I was working with feel very special and they saw success in this sport that they didn’t see in other sports. What I learned sharing this sport with others was that I had to be mindful and engaged when teaching and to teach it with the clarity the kids and the sport deserved. I had to be devoted,” Hoeschler said.

After a while teaching there, Hoeschler’s parents approached her with an idea: to build a lightweight synthetic logrolling log. Her mother had made the first technological development by wrapping the log in carpet so they would last longer. However, the spreading of the popularity of the sport was stunted by the fact that a giant log was hard to transport across the country, let alone across the world.

“I wasn’t prepared to come up with a log in any way. I had an Art History degree, with no engineering or business classes at all. My parents told me try it for two years and if at that time I wasn’t happy, I could drop it. Five years later here I am, happy and inspired all the time by the people that are learning to log roll all around the world,” Hoeschler said.

Hoeschler reached out to people for help, the first being the owner of Winona Canoe Company who was more than happy to help her. Two college engineers were put to work with Hoeschler to come up with a prototype of a synthetic log.

“On the day driving to test the prototype, I realized I hadn’t been worried that this could not work. So I quickly started preparing myself for failure. However, it did work. I quickly realized the design shouldn’t have been what I was worried about, it was creating a finished product that we could sell in mass,” Hoeschler said.

While it was a process, the company is succeeding. They first targeted summer camps, and have expanded to parks and recreation as well as universities.

Director of Recreation Services, Trevor Berneking, is who organized the ACES as well as the clinic after attending an Outdoor Education Conference in Portland last fall. At the conference, Berneking took a workshops called “Learn and Lead Logrolling” with Hoeschler.

“I knew her company was based in Minneapolis and I thought it would be a great opportunity to bring her on campus. I wanted to bring something new, different, and interesting to the campus community,” Berneking said.

Many students attended the ACES event and the clinic to give logrolling a try. Berneking is considering getting a log for campus, but there are still some variables that need to be looked at.

“We would try and get students involved by doing clinics, intramural activities, and team building for athletic teams, clubs and organizations,” Berneking said.

It is apparent that logrolling is a huge passion of Hoeschler’s and there are many aspects of the activity that she enjoys.

“You’re on the log with not just another person, but that person is your competitor. You can hear each other breathing and you can tell when the other is tired. One missed step and you’re in the water. But you have to keep all the focus on yourself. It is a constant battle between being fierce as well as calm at the same time. Half the battle is against your own mind,” Hoeschler said.

The video below shows participants at the logrolling clinic.