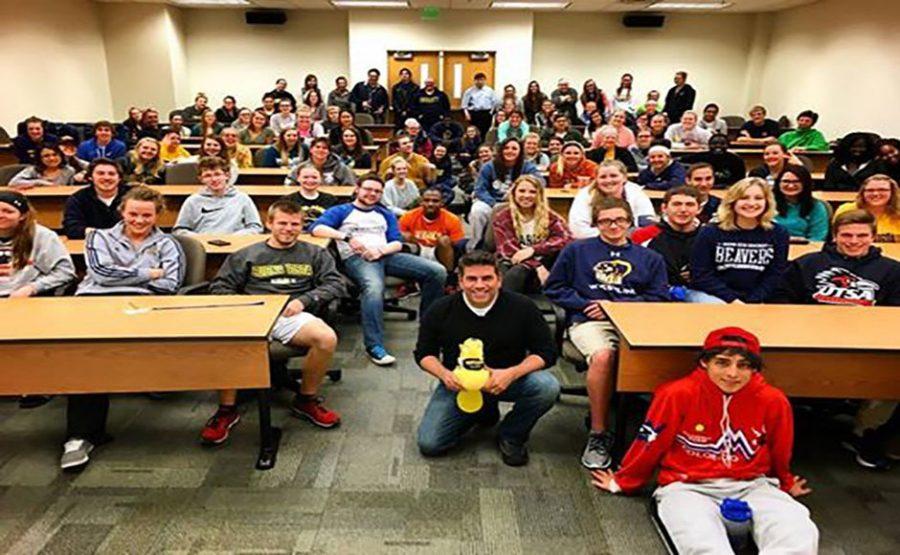 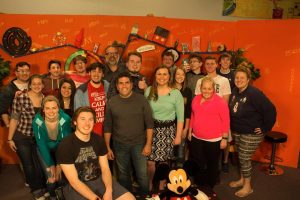 On April 4 and 5, Disney expert Lou Mongello visited BVU. During his time on campus, Lou appeared on UCN Studios’ show, Randomonium and presented at an ACES event. During the ACES event, Lou talked to students about his experiences as a Disney expert and an entrepreneur.

Lou began his presentation by asking students if any thought of themselves as entrepreneurs. A few hands rose shyly from the group, and Lou began to talk about how he became an entrepreneur himself.

Lou Mongello is a successful storyteller, entrepreneur, and author who began his career as an owner of an Informational Technology consulting firm and an attorney who practiced law in New Jersey. With a profound love and passion for Disney, Lou was one of the first to experience the famous Walt Disney World shortly after it opened in November 1971.

“I’m a recovering lawyer,” Lou joked with the group, getting several laughs.

Before turning his hobby into a career, Lou was a lawyer in New Jersey. While in his “normal” job, he decided he wanted to write a book. He told the students that he wasn’t an expert on many things, but he had been going to Disney World every year since its opening year in 1971. With his knowledge of the parks and the company, Lou wrote a book and sent the draft to several publishing companies.

“If you want to see the forty-one rejection letters I was sent, be my guest. But it only takes one yes,” Lou said.

Lou’s book was published, and he thought it was the end of the road. However, in 2005, he started a website and online forum for Disney lovers, and it seemed to grow exponentially. New members were joining every day, and he realized something was happening. With his Disney knowledge, he bought a webcam and signed up for a live-streaming video website.

Within a few weeks, he had numerous followers. After a few months of talking Disney with other fans, Lou got a call; someone wanted to be his sponsor.

“You want to pay me to do something I love to do for free? I was pumped,” Lou said.

He told students that after some time, he quit his job and dove headfirst into his hobby, eventually making it his career. He says that there are often long hours, but in the end, it’s worth it. He gets to wake up and do what he loves to do every single day.

Associate Professor of Digital Media Jerry Johnson arranged the ACES event to inspire students to follow their dreams and tell their story with the help of social media.

“No matter who you are or what discipline you’re studying, technology should not control you; you should control it,” Johnson said.

Johnson learned of Lou Mongello’s informative Disney trivia and positive podcasts in 2007 while searching iTunes for Disney related content. He became acquainted with Lou at one of his meet-and-greets at Disney World during a Buena Vista interim trip in January 2008.

Students who participate in BVU’s interim travel course, “Storytelling with Walt Disney by Land and Sea,” learn about business and media strategies associated with Walt Disney. During the trip in January, students have the opportunity to meet in person with Lou Mongello at Walt Disney World.

In order to explain the key of entrepreneurship, Lou asked each student to think about the following open-ended question: Ask yourself, what would you do if money wasn’t a concern?

Lou ended the presentation by asking students questions about their hobbies. Among the hobbies were photography, filmmaking, art, and music. Lou gave students advice on how to get their names out for networking and how to try to brand themselves. Ending with his favorite phrase, Lou told students not to give up on their dreams.

“I am Lou Mongello, and my advice to you is my motto, both for business and food: ‘Stay hungry.’”

More information about Lou Mongello’s story to success can be found on his website at Disneyworldtrivia.com or through social media @LouMongello. Lou’s published trivia books and “102 Ways to Save Money at Walt Disney” can be found online at Amazon or Barnes and Noble.

Interested students can contact Professor Johnson or attend an upcoming informational meeting to learn more about the interim travel course to Disney. The next meeting is scheduled for Thursday, April 14, 2016 in Lage.