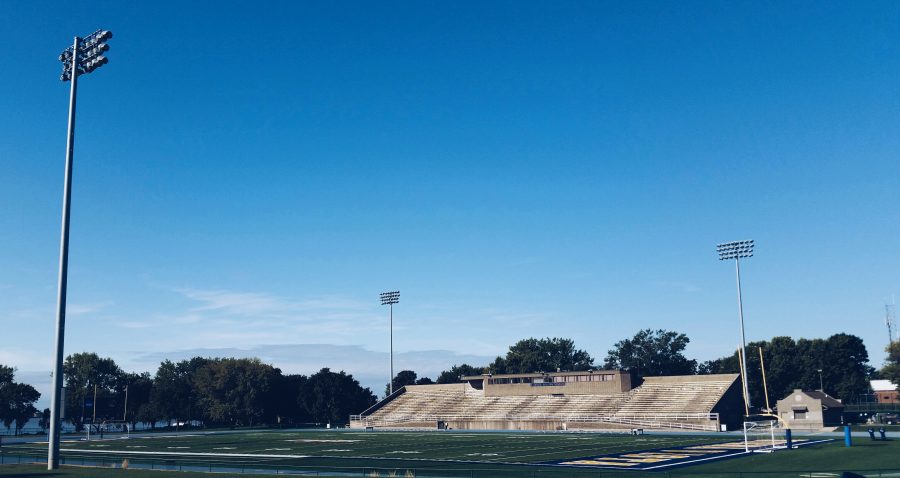 Some of Buena Vista University’s football players and cheerleaders plan to take a knee during the National Anthem at the homecoming football game on September 30. The decision follows a movement across the nation of NFL players who have taken a knee or linked arms in the past week as a stand against racial injustice in the country.

The movement, started last year by then NFL quarterback Colin Kaepernick, began as protest against police brutality. The #TakeAKnee movement was reignited last week after President Donald Trump at a rally in Alabama last Friday said players who protest during the Anthem should be fired and called them disparaging names. Since then, Trump has tweeted several more times expressing similar opinions.

Following Trump’s remarks and tweets, many NFL players, coaches, owners and teams displayed some form of protest and unity during games this week. The players kneeling say they are using their platform to stand up for their beliefs and protest racial injustices in the U.S. The movement has gradually transitioned from NFL to collegiate teams as more athletes join in to take a stand.

According to the captains and coaches of the BVU football team, athletes will be allowed to choose for themselves whether they stand or kneel this Saturday during the National Anthem, and some on the team do plan to kneel.

“We think everybody’s entitled to their own voice,” said Griffin Redding, senior and one of four captains of the football team. “Whatever way the athletes on our team wish to use their voice, we’ll support one hundred percent.”

The team is unsure of how the community will react to their decisions on Saturday, but they’ve remained in unity with each other no matter what. The team has held several meetings this week to talk about the importance of trying to understand each other’s viewpoints and respecting where those views and opinions come from.

“If they have reasons why they believe this way and this is the way they feel, you may not necessarily agree or disagree with their view, but you can at least respect them for being educated and having their own opinion,” said Joe Thraen, senior and captain of the football team. “And that was a big part of the meetings, just sharing each other’s rationale.”

According to the captains and Head Coach Grant Mollring, education was a big component in addressing the issue for the team this week. Coaches and players alike stressed how important it was for everyone to be educated on both sides of the issue and at least try to understand where each other were coming from. Coaches encouraged players to be open-minded and learn from all perspectives.

“I think we’ve done a pretty good job this week educating them as to why this issue has come up and why the NFL is taking the stances they have in terms of the people taking a knee and the people supporting them,” said Mollring. “So I feel comfortable in knowing that our guys understand the issue at hand.”

Mollring said he has allowed his players to choose what they wish to do during the Anthem on Saturday but that the key is the respect the players have for each other no matter what they each choose.

“My wish and hope for our football team is that we present a unified front to recognize that there are injustices still taking place in today’s society, but that we are unified in support of each other’s beliefs and positions,” Mollring said.

The football team has also embraced the expanding diversity of the team and the different cultures that each player may bring. They’ve used the diversity as an opportunity to learn more about other’s cultures and see issues from new perspectives.

“[The coaches] have gone out and done a lot of recruiting, and there’s diversity and different cultures on this team that weren’t in the past, so it’s giving us all a chance to get to know and connect with different people, different areas of the country, different points of view,” said Brady Illig, senior and captain of the football team. “It’s helping us all grow long term.”

The team has also expressed their gratitude for their coaches and the coaches’ willingness to work with them and be open to their views.

“A lot of times you see coaches say, ‘Our team will not be doing this. We don’t stand for stuff like this.’ Our coaches didn’t do that at all,” explained Redding. “They said, ‘We want to respect everybody’s opinion and hear what everybody’s opinion is and facilitate that discussion in a productive way’.”

The captains expressed the importance of being supportive of their team. After spending the week in meetings, discussing views and opinions and learning more about the issue, they have all made their decision about what they’ll individually do during the Anthem. And regardless of decisions, they will all remain in unity and support each other through it.

Senior quarterback and the fourth captain of the team, Cole Miller expressed a similar position.

“[The important thing is] to lead the team towards unity and just make sure that everyone is on the same page when it comes to what everyone is thinking,” Miller said.

Beyond the players on the field, other students from BVU’s Black Student Union (BSU) will be joining the protest on Saturday and also taking a knee during the National Anthem. The BSU was created by sophomore and current BSU president, Alyssa Parker. Parker is also a BVU cheerleader.

After some personal incidents happened to her at BVU, she felt the need to take action, so she created the BSU to educate others on racial and social injustices going on all over America and on the BVU campus.

Parker said, the BSU wishes to let the public know that they in no way, shape, or form are trying to disrespect the National Anthem, soldiers who are fighting, or veterans, but rather are trying to send a message and bring awareness to the social injustices that are dividing the country right now.

Parker hopes that by taking a knee, it will bring awareness and shed light on issues that are going on. She hopes that maybe it will change the minds of some people and make them willing to help create change.

“I think that with taking a knee, making a statement and starting the Black Student Union and doing all these things, I’m hoping that some people that don’t see a problem can start to see a problem and take steps to change the problem,” Parker said. “I can’t change a problem by myself. It really has to be people helping me take the steps to do it. So I just hope that with doing this, people are talking and learning and wanting to make a difference and help the cause.”

Parker also expressed concerns with education and the reasons behind why people are deciding to take a knee. She thinks that President Trump’s tweets likely stirred up some backlash and some across the nation are deciding to do it just because Trump said they shouldn’t. But she made it clear that BSU isn’t acting because of Trump, but rather because they believe there are social and racial injustices that need to be addressed.

Parker said she has been involved in racial injustices on BVU campus. She said fellow students at BVU referred to her and her roommate using the “N” word. Parker took it up with the university but felt they didn’t get very far. Parker said perhaps it was because BVU hasn’t had to deal with racial issues as much in the past so there’s a lack of policy for things like this. But with an increasing number of black students and other students of color coming to campus, Parker feels that things have to change.

“Even this year, I’ve had a lot of problems with the ‘N’ word and just little, small things that I feel like people don’t think are a big deal,” she said. “But when you have an influx of black students and students of color on campus, those small problems are going to turn into big issues if we, as a campus, don’t address them and talk about them.”

Coach Mollring expressed similar views about the importance of getting on board with the changing diversity of campus and having an open mind.

“I’m from a small town in Nebraska with a thousand people, so I grew up a lot differently than these guys have, but when you go in and recruit these guys and you go into their homes and get to know them, and I’m talking about our players from out of state or players from metropolitan areas, it’s eye opening to me,” he said. “It makes you more aware of situations that you probably weren’t aware of growing up.”

Mollring said that what has impressed him most is the respect the guys on the team are showing.

“I feel like the 80 guys that we have respect each other and value each other as we build this program. Sports and politics often travel together and it is very difficult for young people to separate the two when watching professional athletes take such public stances. We hope that our young people who feel strongly one way or the other are active in their respective causes moving forward,” Mollring said.

He also noted that the team operates under the philosophy of ‘Team Before Self’ and he hopes they continue that as the rest of the season unfolds.

“We have used the following quote from Socrates as a way of reminding ourselves that humanity and society must move forward with positivity: ‘The secret of change is to focus all of your energy, not on the fighting of old, but on building new’,” Mollring said.