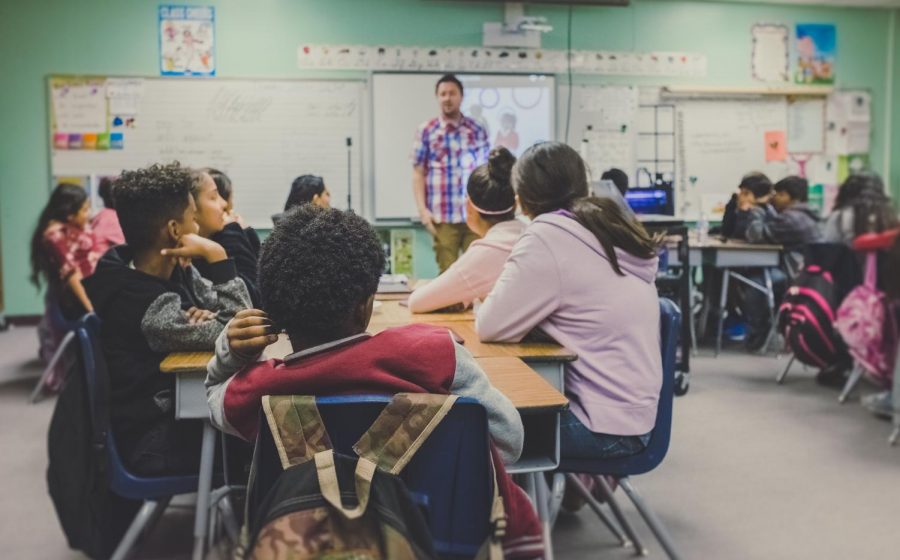 Photo by NeONBRAND on Unsplash

I’m going to tell you a story about my uncle.

Ken Lewis is a high school History teacher in Phoenix, Arizona. Every morning, he walks up and down the aisles of his classroom taking attendance and greeting each student as he walks by. Last Thursday upon returning to his desk to double check the attendance list ensuring no student had been mis-marked, he noticed something unusual.

A group of students were scrambling as one of their peers held a large kitchen knife to his stomach, ready to take his own life in the classroom.

He said everything happened so quickly, recollection is like a dream.

Lewis rose from his desk, and within seconds he was struggling with the student, begging him to “let go” of the knife while he pulled the handle toward himself to get it away from the student.

Finally, the struggle ceased. The student’s grasp slipped and my uncle restrained him, evacuated the rest of the students to the library, and called for help.

“It took all of my strength.”

I think about this story now as I try to exist in a world that has accepted loss of life as a norm.

We exist in a place where another one of these troubled teens somewhere else in the country had the opportunity and the resources to not only take his own life, but the lives of his peers. Where 17 teenagers said their final goodbyes to their parents before heading to school, not knowing what fate would later meet them there.

Terror struck Marjory Stoneman High School in Parkland, FL, on Valentine’s Day when a mentally ill, former student murdered 17 of his peers, point blank. I thought I had only seen this on FX’s American Horror Story, but I hadn’t. It’s real.

I’ve seen simulations of the terror on their faces because our society has recognized this as a problem enough to portray such horrifying scenarios in TV shows and on film, but fail to do anything further about it.

Marjory Stoneman high school senior Emma Gonzalez was once a typical high school student, but now, she’s the face of a national movement sparking action among teenagers, encouraging them to get involved with government and policy, and urging lawmakers to see the painful repercussions from a lack of action.

“He wouldn’t have hurt that many students with a knife,” she said.

Her words ring in my head and rush tears to my eyes.

He wouldn’t have killed that many students with a knife. Someone could have restrained him much faster. Something so terrible could have been avoided without the gun.

The gun is the antagonist of this story. The U.S. Constitution guarantees Americans the right to bear arms, our country’s second amendment. It was written and implemented for fear of governmental tyranny when the nation was born 242 years ago. Without our weaponry, we are defenseless against a government take-over.

It sounds like some sort of pre-apocalyptic movie, but this is actually why some lawmakers have continued disagreement on legislation to increase mandatory regulations on mental health background checks to gun owners in the United States.

So, one solution is to get rid of the guns.

People who want guns will always find a way to get them. People who have homicidal thoughts will use other weapons to commit senseless mass murders in schools. So how does getting rid of guns keep anyone safe? “A good guy with a gun can stop a bad guy with a gun.”

A good guy with a gun is my dad. He’s a Des Moines Police Officer and he is a gun enthusiast. He’s proud of his ability to shoot and he does it well. He’s a sniper for an elite shooter squad and he’s the one you could trust to stop the bad guy with a gun.

I believe it’s important for a police officer to carry a gun. Arguably, as a certain branch of our nation’s military, the police force deserves the best defense technology to serve and protect their communities. And I’m not talking about police/community relations right now, just focus on what the intended purpose for using a gun is: protection.

I am a teacher and you want to arm me? The NRA says the answer to stop school shootings is more guns. But we say, arm us with more resources not more guns. @mcricrke @NRA pic.twitter.com/RlfV7IEC63

“Arm me with a school psychologist who has time to do more than just test and sit in on meetings about testing. Arm me with counselors so we can build skills to prevent violence and have meaningful discussions with students about their future. Arm me with social workers who can thoughtfully attend to students and their family’s needs. Arm we with enough school nurses so they are accessible to every child.”

Do I have a solution for this problem with specifics about how gun reform should look exactlyrightatthismoment? No, I don’t. But I do know that Emma was right. He wouldn’t have hurt that many people with a knife, because my uncle took that knife away from his student and saved him. He is a hero.

Our lawmakers should take a lesson from Ken Lewis.

When terror falls upon our classroom, our country, they turn a blind eye. It’s time we armed Americans with the strength, resources, people, and government support to make change in our country.