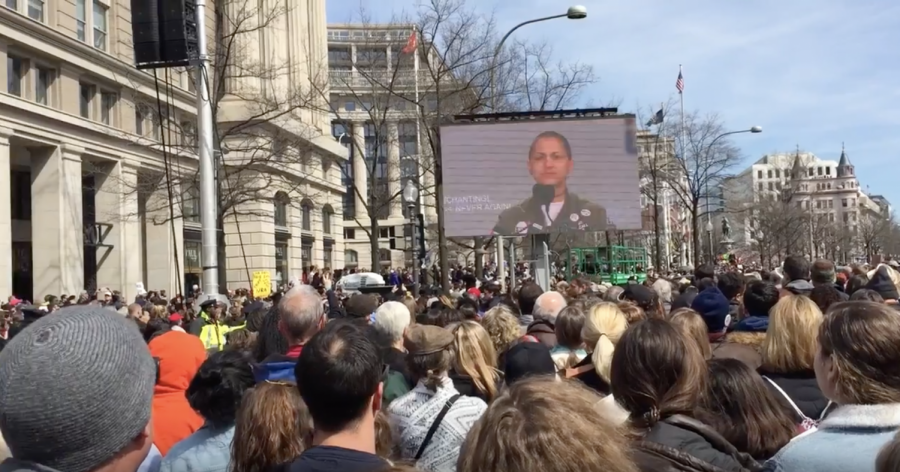 On Saturday, March 24, citizens marched in major cities across the United States as part of a nationwide demonstration called “March For Our Lives,” advocating for gun reform and safety in schools.

The rally in Washington D.C., was organized through a social media hashtag, #NeverAgain, began by a group of student survivors from the shooting in Marjory Stoneman Douglas High School. They were further supported by gun control advocacy group, Everytown for Gun Safety, according to CNN.

The main event took place in Washington, D.C., around noon, when students and their families, and advocates of all ages gathered on Pennsylvania Avenue to march. One of those participants is BVU junior Andrew Bandstra, who’s currently interning just a few blocks over at PBS’s To the Contrary with Bonnie Erbe.

Bandstra, a junior Digital Media major, said he was amazed by the amount of people present for the rally.

“I kept saying to myself that this is absolutely mind-blowing how many people are here,” said Bandstra. “You couldn’t see where the people ended. I got on my tiptoes, I could see over everybody, and you couldn’t see the end of the group of people from either direction. It was absolutely incredible.”

USA Today reported that the organizers estimated nearly 800,000 people who attended the march in D.C. However, other estimates have been closer to 200,000.

“It really showed you how many people cared enough to pay money to come to DC, fly to DC, or take a day off whatever else they would have been doing, and make a stand,” said Bandstra.

According to the March for Our Lives website, nearly 800 sister marches took place across the nation and around the world. CNN reported that marches took place internationally in cities like London, Paris, Madrid, Tokyo, and Seoul.

“I like to be a part of positive change,” said Russell. “I was really happy to see the place I grew up in advocating for it, because I think it’s really important.”

Russell said she supports the cause because, while she doesn’t necessarily believe in all of the ways people want change to happen, she does agree that change is needed.

“What they’re doing is coming up with different ideas about how they think change should be made and I think that that is where we need to start and that’s where we’re starting and so it’s positive to me,” said Russell.

According to the mission statement, March for Our Lives supporters are working toward five main goals:

2. Bringing the ATF into the 21st century with a digitized, searchable database

3. Funds for the Center for Disease Control to research the gun violence epidemic in America

Similarly, the March for Our Lives movement is working toward voter awareness. It’s website offers a few different tools to make registering to vote quicker and easier.

Russell agrees that students should have a voice when it comes to issues like this.

“[Students are] the ones who are in school. They’re the ones who are going every single day,” said Russell. “I’m at university. I mean, I think about that sometimes—what if there was a mass shooting? I want to know that there’s people who are making sure…trying to prevent that from happening.”

Young or old, big or small, the marches are proving how many people will be affected by this movement. But in the end, it comes down to one thing for the survivors of the Parkland shooting, “The children of this country can no longer go to school in fear that each day could be their last.”