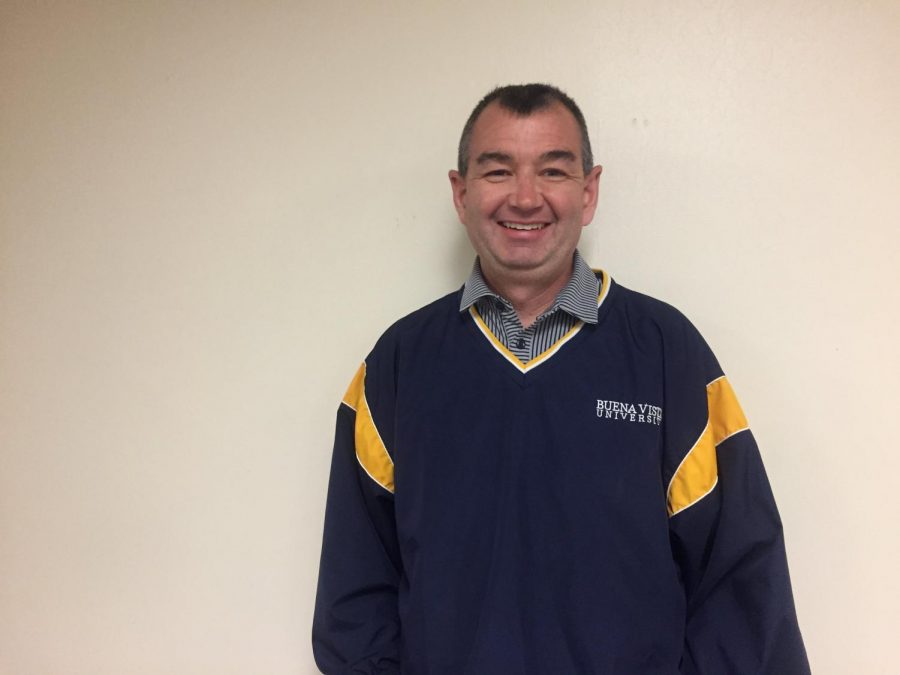 On April 9, Assistant Dean of Students and Director of Student Success Mark Shea announced to the Student Affairs staff that his last day at Buena Vista University would be July 31.

Shea has a long history at BVU.  He graduated from BVU in December 1994 with an elementary education degree.  Then, in November 1995, he began work in the Admissions Office at BVU.  He worked as an admissions counselor for eight years, and then left for a different position in 2003.  However, Shea couldn’t stay away from his BVU home for too long.  He returned to Admissions in 2007 and then became the Director of Student Success in 2009 and has been at this post ever since.

Shea has accepted a new position with the Area Education Agency (AEA), which is an organization that provide different services to schools such as special education and counseling.  Iowa has nine AEAs, and Shea’s position as Postsecondary Readiness Lead will be the second in the state.  While he is very passionate about BVU, he felt that someone bigger than him was leading him to this decision.

In his new position, Shea will have the opportunity to do similar things he does for the university currently, but for high school students.  His position focuses on supporting post-secondary success.  He’ll be looking at data from each individual district in the area about where students go after they graduate, if they graduate, what basic skills they graduate with, and other similar information.  Then he will use this information to help find ways to improve school programs to give high school students a better chance of acquiring a higher education.

“It’s really cool [to] be using what I’ve been doing at the college level to help students, high school and even as young as elementary, working with teachers and counselors and administrators to help figure out what we can do to help students succeed so they can be prepared for being successful in college,” Shea says. “I think it’s kind of that idea of having even a bigger impact.”

Shea says that while he is excited for this new opportunity, all the connections he has made at BV, especially with the students, will be deeply missed.

“I think some of my greatest times are just the opportunities I’ve had to interact with students, especially maybe some of the times I’ve really been able to build good connections with students,” Shea says.  “Yeah, that’s probably what I’ll miss the most. The people and the connections and the relationships.”

Dale Scully, vice president of student affairs and dean of students, has worked closely with Shea over the years and is sad to see such a great leader of the university go.

“I just think Mark does a fantastic job making students feel like they matter and that they have value,” Scully says.  “I think Mark just brings a level of character and integrity to the job that, every day, you know he’s making good decisions and he’s doing what’s right on behalf of the students.”

Scully says that while he will miss a great colleague and close friend, he is happy for Shea and the opportunity placed in front of him.

“I couldn’t bless him any more than I am right now and just wish him the best of luck,” Scully says. “He’s given a lot of time and effort to this institution. And to me, I can’t blame him at all for taking this opportunity because it seems like it’s just absolutely perfectly crafted just for him.”

Even though Shea will be taking his leave of BVU, he will not be far off.  His office for the AEA will remain in Storm Lake, and he hopes to be an advocate for BVU among the schools he will be working with.

“I’m loyal to BV. I will push students and counselors to consider BV and tell them about all of the opportunities here,” he says. “I think I can still have a positive impact on enrollment and student success for BVU. That’s another thing that’s kind of exciting as well, that I can still serve this university [that] I love, even though I’m not technically employed here.”

Shea plans to still do the public address for football games and the scorebook for basketball games.  He says that while he may be changing jobs, he will always be loyal to this school that he has called home for so long.

“There’s blue and gold, I think, that run through these veins. So, I’m still BV to the core.”

This passion and care for the institution is exactly what Scully is hoping to find for the next director of student success.

“When you walk in the room and have a conversation with them, you feel like you matter. You feel like you’re a part of the BVU community. You feel like this could be a place where you could be successful,” says Scully.  “I think as a director of student success, that’s exactly what you want that person to do…We’re looking to hopefully find somebody who can replace that and bring that same level of enthusiasm into meaningful student engagement.”

Scully hopes to have someone hired by the summer in order to have a seamless transition between Shea and the new director of student success.