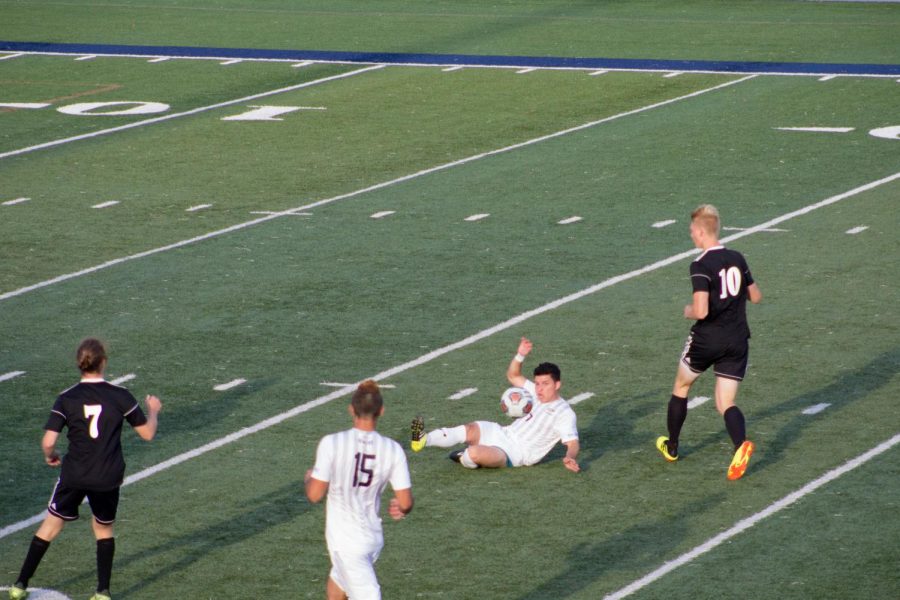 Both the BVU Men’s and Women’s Soccer teams took on the Grinnell College Pioneers this past Sunday, September 9th, in a home doubleheader at J Leslie Rollins Stadium.

The Women’s team (1-3) faced off against the Pioneers first, after a rough beginning to their season. With just a solo win entering the contest, the Women sought an opportunity to get things back on track and begin a streak.

However, from the opening kick, Grinnell had come to play.

An offensive onslaught from the Pioneers had them putting pressure on the Beavers early forcing Junior Goalkeeper, Katie Voortmann, into making a few impressive saves.

Grinnell finally found their mark in the 19th minute, when a corner kick found Gwen Holtzman in the middle of the box. Holtzman’s looping header found the back left corner of the net, putting the visitors up 1-0.

Just seven minutes later, a miskick by Grinnell coming off of a corner landed at the feet of Valencia Alvarez, who fired a shot into the bottom right corner, just out of Voortmann’s reach to double the Pioneers’ lead.

Grinnell would cap off a stellar first half with another goal by Alyssa Radakovich just before the whistle to lead 3-0 entering halftime.

Though the Beaver defense, lead by returning All-Conference centerback Ella Wiebusch, would tighten up in the second half, the Grinnell offense still proved a force to be reckoned with.

Pressing harder after the break and providing a goal-scoring opportunity to midfielder McKenna Whitehill, BV spurred their offense down the field to try and cut the lead down.

However, Grinnell sealed the game with their fourth goal of the match when Quinn Berleman-Paul’s top corner strike sailed past Voortmann in the 65th minute.

Though conceding four goals on the day, Voortman would record 11 saves to lessen the damage.

The Women are back in action against Wisconsin-Platteville this Saturday, September 15th.

The Beaver Men’s Soccer team (0-5) were still seeking their first win of the season when Grinnell Pioneers (2-1) arrived in Storm Lake to take on the Beavers.

In a game immediately following the Women’s match, the Men kicked off at 4:00 p.m. for an afternoon game.

Buena Vista’s senior-led central defensive pair of Kevin Edgar and Ryan Exline worked in tandem to keep Grinnell out from the start and protect their third of the pitch.

The duo’s partnership, along with BV’s experienced keeper Manuel Garcia Aguilar, held the Pioneers at bay until ball rolled out for a corner kick in favor of Grinnell in the 30th minute.

In almost the exact same fashion as the Women’s game, Grinnell’s Jasper Yang took the corner kick off of his head and aimed for the bottom left corner of BV’s goal. Sneaking past Aguilar, Grinnell scored the first goal of the game.

The Beavers would not be deterred, as senior Gum Riak led the attack for Buena Vista peppering the Pioneers goal. By the end of the match, Riak would record four shots.

In the 64th minute, Grinnell’s Yang would strike home once again, doubling both his goal tally for the day and the Pioneers’ lead.

BV’s game-long endurance would prove a positive, and the Beavers would hold strong and press on. As the defense stiffened and the attack continued to surge, it wasn’t a surprise when BV finally found the net.

In a late game flurry, previously mentioned defensive leader Kevin Edgar connected with a free kick in Grinnell’s penalty box and chipped the keeper to bag his first goal of the season.

In the end, Grinnell would secure the win as Buena Vista didn’t have enough time for an equalizer.

Aguilar would end up with four saves, and Edgar scored the solo goal, unassisted.

The Beavers will kick off again this Saturday, traveling to Augustana in Illinois after a week-long break.