May-Term Possible in Near Future 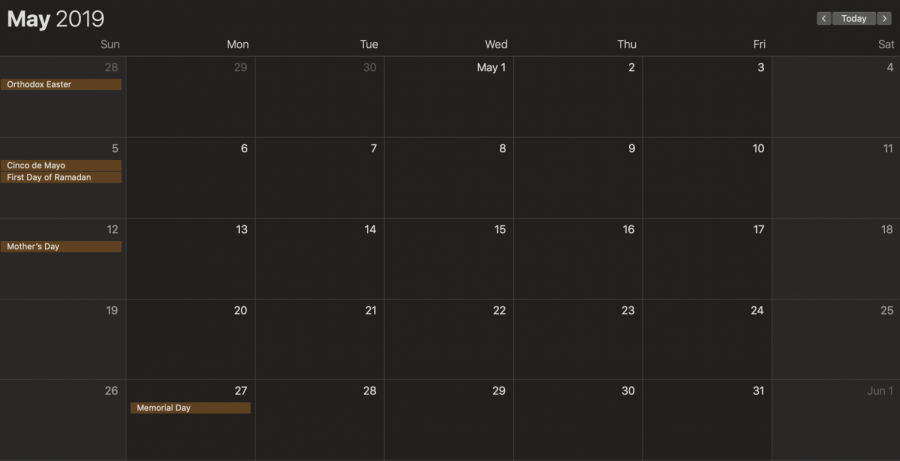 Unlike many schools, Buena Vista University’s (BVU) academic calendar includes a January term. Other schools tend to end their academic year earlier as a result, including an optional May term in the spring after classes are let out. While there are pros and cons to each approach, BVU’s Academic Affairs Committee has been discussing changing the way the academic calendar looks in order to include a May term.

BVU Provost and Vice President for Academic Affairs Dr. Lenzmeier explained that there are a lot of people involved in the discussion, one which has been going on for a very long time.

“The Academic Affairs Committee, which does contain Student Senate representation, is the body that controls the calendar,” explains Lenzmeier. “There are students on that and we’re hoping that they are bringing it to students and talking about it. I’ve also asked the committee to engage with athletics and student success on that conversation.”

Calendar issues for next year need to be decided by the end of the Fall 2018 semester. Associate Dean of Faculty Dr. Peter Steinfeld and Lenzmeier are hoping that a decision can be reached by then. If a change is agreed upon, it could be implemented as soon as January of 2020, but if the proposal discussion takes longer, the calendar may not be put into place until January of 2021. And that’s if the changes are really going to be made.

The alignment with online and site calendars is really a key issue, because there are more and more students, especially in the School of Education and the School of Business who are taking classes online.

“This is a good thing and uses resources very well to allow students to take classes in an online environment. What the calendar switch would mean is that the Fall semester would consist of terms one and two, both of which follow pretty closely to the current schedule; in term three, or the current interim period, is when things get a little weird,” said Steinfeld.

Lenzmeier emphasized the importance of how this would affect students. He shared that the biggest question being considered during the decision process is whether or not the institution is getting everything out of January term and if the student experience could be maximized if January term were moved to May.

“We want to at least have a conversation about whether May term would be better for students. Maybe if they don’t want to do an internship or don’t want to go on a trip or take a class, they could start a job and get an extra three weeks of summer,” Lenzmeier explains. “Not that there is any specific plan, but we should talk about it and see what makes sense.”

One substantial change would include the content and focus of January interim classes themselves. Because BVU is under increasing scrutiny from the Higher Learning Commission (HLC), an accrediting agency ensuring that classes are being taught by fully-qualified faculty members, the university may not be able to offer the same kinds of classes.

“It has been very cool to encourage experimental classes that are sort of expanding students’ horizons in different directions that may not be directly in the area of study of the faculty member,” said Steinfeld. “Those classes offer students an opportunity to see what it looks like to think along with the faculty member who is also learning about a particular area.”

Another change is the effect on site and online courses. The way these are currently set up, the two eight-week course schedules are quite staggered. A new calendar could mean an improvement in the way that these courses align with classes held on BVU’s campus.

Lenzmeier commented on the fact that sometimes things come up right before classes start that lead to a loss of professors, and so students may be enrolled in these online classes instead.

“We have awesome professors on this campus. I am really happy with who we have, but there are times when I might be able to employ somebody who is really talented who happens to live in another part of the state. And maybe I can get them to come to campus for a week or two,” said Lenzmeier. “But maybe then having them teach online from a distance might actually give the students a better experience than if I hire someone who’s less qualified here.”

Both Steinfeld and Lenzmeier make it clear that there are many factors that are still being taken into consideration.

For instance, many students may also be wondering what this move would mean for travel. One argument is that travel during January is less expensive than in May. In some situations that is true, in some it’s not.

Steinfeld, a member of multiple trips and is a huge advocate for travel, says that, “It depends on the destination for what the expenses might look like. So, I think it’s kind of a wash. Sometimes it really is a pretty cool advantage to be able to travel in January. Nonetheless, it means there’s no reason why a trip couldn’t go in May as well. So, I think most trips would be able to go.”

“I can’t guarantee that, but my goal would not be to change that part at all. Again, we want to make sure students do have an opportunity to travel and see the world; it is hugely important for building global perspective,” said Steinfeld.

Both Lenzmeier and Steinfeld are careful in saying that the way interim is set up will not look the same if it is moved to May, and that the focus will always be on how students are affected.

“This is something that we all need to think about. Administratively I’m hoping that, you know, the faculty is going to come to a conclusion about what’s going to be best for the students, which is what is important,” said Lenzmeier.