Trump’s Caravan Commercial: Insensitive with a Negative Generalization of Immigrants 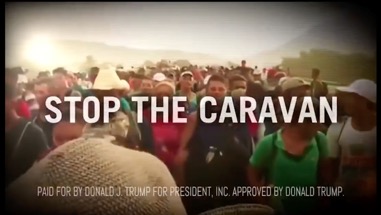 On Sunday, Nov. 4, 2018, an ad “paid for by Donald J. Trump for President, INC. Approved by Donald Trump” was aired on NBC during the Sunday night Green Bay Packers vs. New England Patriots football game. NBC chose to air the ad after it was denied air time by CNN.

“CNN has made it abundantly clear in its editorial coverage that this ad is racist. When presented with the opportunity to be paid to take a version of this ad, we declined. Those are the facts,” the CNN Communications account tweeted on Nov. 3, 2018 at 7:58 a.m.

NBC aired the ad in a 30 second time slot during Sunday Night Football, one of America’s highest ranked television programs. Millions of viewers were exposed to this ad that depicts Central American Immigrants traveling in caravans fleeing terrible living conditions as an “invasion” of the United States.

The advertisement also includes a clip of Luis Bracamontes giving a statement during his court appearance, stating that “The only thing that I regret is that I just killed two.”

The ad continues with “America cannot allow this invasion. The migrant caravan must be stopped. President Trump and his allies will protect our boarder and keep our families safe. America’s future depends on you. Stop the caravan, vote republican. I’m Donald Trump, and I approve this message.”

“After further review,” NBC said, “we recognize the insensitive nature of the ad and have decided to cease airing it across our properties as soon as possible.”

Fox News also aired the ad briefly before discontinuing it. No explanation behind the decision has been given.

It seems everyone has an opinion on our country’s current political climate. For a moment, let’s take a step back and analyze some facts.

The Midterm elections took place on Tuesday, Nov. 6. Democrats gained control over the house with 225 seats, compared to the 197 seats taken by the Republican Party. This is the first time in 8 years that Democrats have held control over the House of Representatives in the United States.

In my opinion, it seems as though the Trump administration used the ad as a last-minute attempt to sway voters towards Republican representatives. In particular, the words “Vote Republican” push for support of the party.

The ad’s display of immigrants combined with the clip of Luis Bracamontes is a cruel comparison. Bracamontes, an illegal alien from Mexico, committed the heinous crime of shooting two American police officers in 2014. In March of 2018, Bracamontes was found guilty, and given the death penalty by a jury in Sacramento, California.

I am not in the slightest minimizing the horrendous acts committed by Bracamontes. However, the actions of one man cannot speak for an entire group. The families seeking refuge in the United States are fleeing the terrible state of their country. Many of them already have family living in the US, and they are attempting to reunite with their loved ones. The ad constructed by the Trump Administration demonstrates scare tactics used to influence viewers perception of immigrants in the United States. These families are not coming to America with intentions to cause harm and commit crime.

Last year, I interviewed a student who was an immigrant from El Salvador. With the help of a translator, she explained to me that her family was very poor in El Salvador and they had only two options: to stay in a poverty driven country, where they were likely to die from disease, malnourishment, or extreme gang violence; or they could seek refuge in the United States in hopes for a better life. After debating their limited options, her family decided to make the treacherous journey to the United States. It took a total of three years of traveling and hardship before they completed their journey. Upon arrival, they immediately filed for citizenship and began working jobs that pay below minimum wage. Although this was a difficult life to live, it was better than the lives they left behind in El Salvador.

Yes, Bracamontes is an alien from Mexico, and he killed two sheriff’s deputies in California in 2014. However, Ian David Long, a 28-year-old former Marine and United States citizen opened fire on a Borderline Bar & Grill in California and killed 12 citizens in 2018. Just because Ian David Long is a former Marine does not mean that all marines are dangerous murderers.

The same goes for the Bracamontes case. Just because he happens to be an illegal immigrant does not mean he is the face of all illegal immigrants. This is an absurd concept that is being implemented by the Trump Administration through this ad campaign. America is a government of the people, by the people, and for the people; we need to be intelligent and knowledgeable enough to know when we are being manipulated.

At the end of the day, we are all human beings. We all have the basic needs for shelter, water, food, family, and community. Every person deserves a right to these basic fundamentals. These people coming from Mexico and other countries are simply looking for better opportunity to prosper. America is, and always will be, a melting pot of people from different cultural backgrounds and ethnicities. Some may argue that this is what makes America so great. We all need to develop a better sense of empathy, compassion, and understanding for those in need. I believe that only once America chooses love and acceptance over hate and rejection will we truly make America great again.