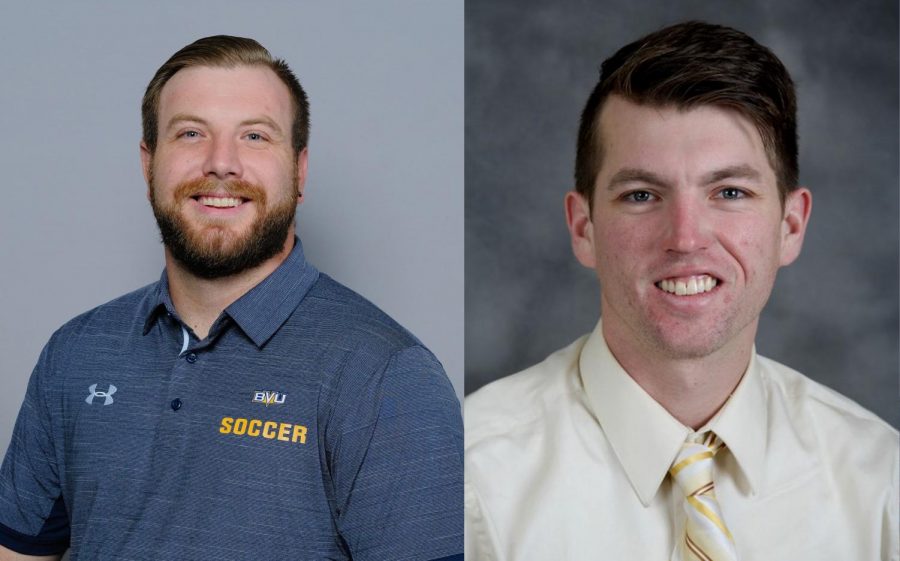 Ever since the Buena Vista University Soccer program began in 2007, there hasn’t been much in the way of success and records set for both the Men and the Women.

With a combined 2-30-1 record during their 2018 season, the plan for the upcoming 2019 campaign is to turn that on its head with a pair of major changes focused in the coaching department.

With the additions of Benton Frayne and Ross Minick, Buena Vista Soccer officially has its pair of new leaders.

As a native of Albert Lea, Minnesota, recently hired Head Women’s Soccer Coach Benton Frayne is a native to Midwest soccer and the local flavor of play. After realizing his dreams were to coach at a higher level, Frayne set out on a path that ended with his arrival at Buena Vista.

“I started coaching when I was 19 for my former high school and was coaching club [soccer]. I really fell in love with playing the game and coaching soccer and wanted to keep it a big part of my life,” says Frayne.

Already a tested collegiate coach, Frayne has experienced a variety of Midwest soccer play styles and opponents before being hired to the Head Job at BVU.

“2009 was my first break when I had the opportunity to be the assistant Women’s Soccer coach at Grinnell College,” explains Frayne. “From there I went back and coached high school to learn more about the game and challenge myself as a coach. Frayne adds, “I coached at Bethany Lutheran College for two years and then for the last four years I was at Gustavus Adolphus and also the director of coaching of a small club.”

Meanwhile Minick, who acted as the lone assistant to now former BVU Men’s Soccer Head Coach Ben McArthur last season, received word of his promotion to the Head Coaching job and is also a child of the game.

“I grew up in a suburb of Cleveland, Ohio and have played soccer since I was three years old. I played for an international soccer club and decided to play Division 3 soccer at a school very similar to BV,” says Minick. “After I graduated, I jumped around jobs and was coaching a middle school club team. Just seeing that growth was the best part. After getting my graduate assistantship from Hiram, I got the call from Ben and he decided to bring me out here.”

Minick also described his initial wave of emotion after the formal announcement of his promotion. “It was very exciting for me to finally get a chance to make a mark on my team and develop my own program. I’m excited to get started.”

It’s clear from the start that to both coaches and Beaver fans the old BV style of play hasn’t worked for a long time. With that realization, Frayne and Minick plan to shake things up.

“It’s in vogue right now but playing possession and keeping the ball on the ground is the easiest way to play,” says Frayne. “It takes a lot of players buying into it and understanding it’ll take us two to three passes rather than one larger pass to get in behind, but it’s more creative and I think anyone can play it. It’s more enjoyable to coach, watch, and when everyone gets involved it’s a lot of fun to play.”

For Minick, it’s more of the same.

“I really enjoy playing that possession soccer. Sometimes we tend to tend to overthink things and structure it too much. I’m really about more free flowing soccer with more creativity and coaching decision-makers,” says Minick. “We want to have a framework for what we want to do, but being too structured can lead to everything blowing up so we want to be creative.”

Lifting sessions with Director of Athletic Performance Josh Cue and team meetings on the side have led into the beginning of spring season for both the Men and the Women’s squads.

“We’ve been in the weight room all spring so far and Coach Cue has done a great job. The guys are working hard, and we start our spring season on Monday, “says Minick. “We’ve got 19 returners ready to go. We graduated seven starters, but guys are ready to fill roles and step up.”

“For us, our spring season starts on Tuesday, so we’re super excited to be getting outside,” says Frayne. “We have our 15 allowed practices and our numbers are little down right now with multi-sport athletes. We really want to get out there and set the new tone for our practice efficiency.”

Though the Women’s team has focused in the weight room and remained well conditioned, Coach Frayne still sees endurance as a point of emphasis in practice, albeit trained differently.

“Time between activities is low so practice is high paced. I’m not one of those coaches that believes in running to run. We can use those activities and playing the game to get our fitness in with getting more and more touches on the ball. Let’s be efficient, get in and get out, and I think the players will respond well to that,” says Frayne.

With the chance to finally kick a ball on a real pitch for the first time in what seems like forever, both Minick and Frayne are ansty to see what their teams can prove.

“The guys are excited and I’m ready to get outside. I hate sitting in my office,” says Minick. “I know recruiting is part of it and all that, but I’d rather be out there coaching.”

The Men’s squad begins spring scrimmages on the 27th of April where they’ll travel to Northwestern College in Orange City, Iowa to take on the Red Raiders.

Meanwhile, the Women’s team begins spring play the very same day. However, the women will play at home in J Leslie Rollins Stadium. The Beaver ladies will kick things off on Peterson Field that Saturday at 2:00.