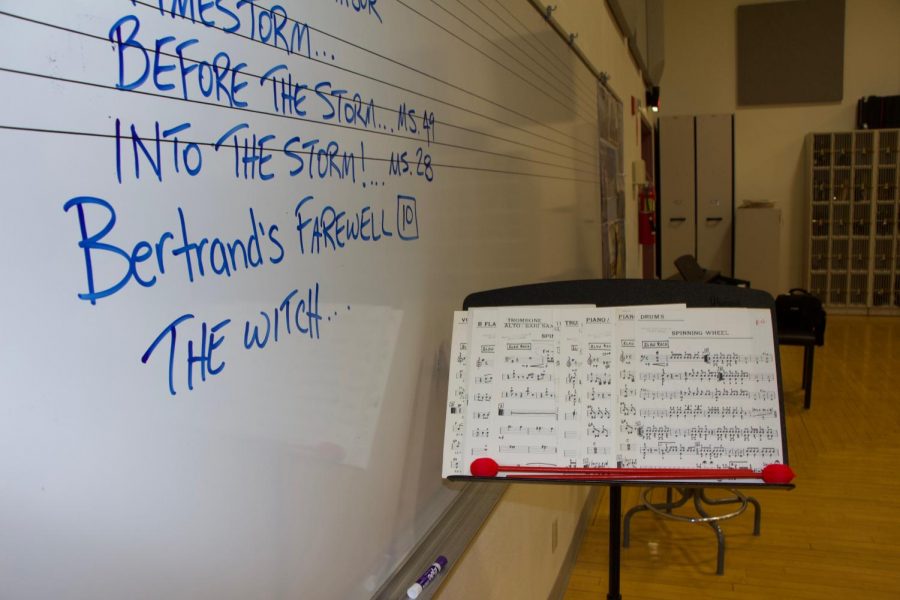 On the morning of Friday, March 15, Jerry Bertrand, director of bands at Buena Vista University vacated from his position after teaching for over 20 years. Bertrand had planned to retire in May, at the end of the academic year, but at midterm it was announced he would not return after Spring Break despite only having eight weeks left on his contract.

Bertrand declined to comment on the matter. When music students learned of his sudden departure, many began to ask questions.

It was the day before Spring Break officially began, and senior Corgan Peterson, who served as Bertrand’s academic assistant, was on his way to Missouri with the BVU choir when he learned of the “heartbreaking” news.

Peterson alleged that Bertrand’s departure was not of his own choice.

“Jerry Bertrand was released from the university, or you could say fired,” said Peterson.

BVU administration cannot confirm the reasons behind Bertrand’s early departure citing confidentiality in personnel matters. Faculty are prohibited from speaking on the matter, as is Bertrand himself, due to the following code of conduct policy.

Confidentiality and Privacy Buena Vista University Faculty, Staff, and Board of Trustee members are entrusted with confidential, proprietary and private information. It is imperative that those who have access to this type of information do not make any unauthorized or unlawful disclosure of information either during or after employment with the University.

Dr. Brian Lenzmeier, Provost and Vice President of Academic Affairs, also declined comment on Bertrand’s departure. However, he did offer commentary on the position’s temporary replacement.

“We are grateful to have an accomplished music educator and conductor like Mr. [Dan] Cassady step in on short notice to lead our concert band and teach music education classes for the rest of this school year,” Lenzmeier said.

According a message sent to students one week after Bertrand’s departure, “Dan Cassady is a music education veteran with over 40 years of music education experience. He has taught music and directed bands at all educational levels from elementary to higher education.”

According to Tiffany Wurth, director of athletic bands, she will be taking over the position of director of bands full-time next year. This arrangement was decided long before Bertrand’s departure and had been put in place in preparation of his planned retirement.

Some students have communicated that the abrupt transition has been confusing and unsettling.

“[Bertrand] …was absolutely vital to our music education program, … was planning on retiring in two months. It doesn’t make any sense to me,” said Peterson.

“Sometimes the unknown is a killer. People want to know every single detail in order to justify their thoughts. Everyone needs to trust that the administration made the best decision for everybody involved,” said Wurth. “Some decisions are tough to make. In the decision that they made; everybody’s best interest was kept at the forefront.”

According to Wurth, the classes typically taught by Bertrand were going to be divided between Dr. David Klee, professor of music, and Dr. Merrin Guice-Gill, associate professor of music next year. However, this week, Guice-Gill announced she has resigned from her position at BVU and is pursuing an opportunity elsewhere.

“It took a lot of people off guard,” senior, Chance Johnson, a member of the BVU choir, said. “Everyone is in a state of turmoil. Students are confused and concerned for the future of our music department.”

In a statement to students regarding Guice-Gill’s resignation, Jamii Claiborne, Interim Dean of the School of Communication and Arts, noted that “BVU is committed to a strong future for music,” and the search for a new faculty member in Guice-Gill’s position would begin immediately.

The overall reaction from students in the music department regarding Bertrand’s departure has been mournful.

“Jerry strives to bring out the best in his students. He is very old school in the sense that he pushes people. He often saw more potential in students than they saw in themselves,” Peterson said.  “He had been teaching for 40 years. When he began his career, it was expected of teachers to push their students very hard. Today a lot of teachers have lost that edge.”

Alumni, students, and faculty had big plans for Bertrand’s final concert at BVU, that was set to take place on May 12, 2019.

“His last concert at BV would’ve been his hundredth concert. Watching him cut short at 99 is heartbreaking,” said Peterson.