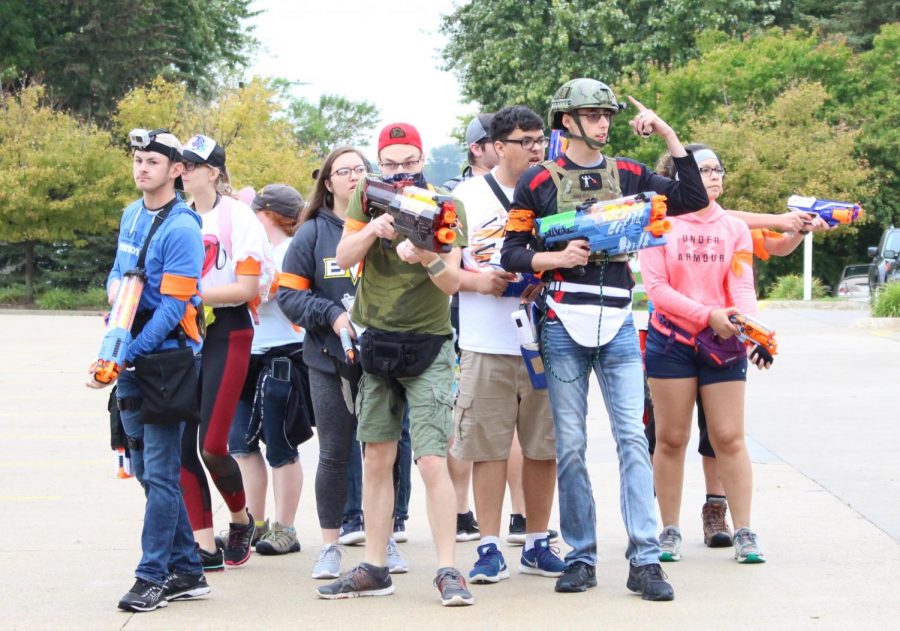 As the clock struck noon on Sept. 27th, students of every kind prepared themselves for a battle to commence. Throughout the weekend, yells could be heard across campus, frantic steps echoed through the allies, and Nerf blasters left zombies tattered and torn. For one team, victory means only momentary safety. As day becomes night, unpredictability sets in. In the end, one team stood victorious, but only until the next wave of humans and zombies come back for more warfare.

Whether you are a longtime player of Humans Versus Zombies or not, many within the BVU community have seen the iconic orange headbands, Nerf blasters, and darts associated with the game. Since 2012, HVZ, as it is most commonly known, has overtaken campus and become a must attend event for veterans  as well as newcomers once they catch the bug!

In the beginning of the game, there is an original zombie, who’s responsible for gathering an army of other zombies by tagging other humans before the first mission departs. Throughout the weekend, humans and zombies participate in various missions, which can involve escorting faculty to certain areas around campus, gathering different pieces of a puzzle, or, in line with this year’s theme, helping Horton destroy the Who’s of Whoville.

Each year, the moderators of the game (aka the “Mods”) are responsible for coming up with the game’s theme, story, missions, and much more. Glenn Hackbarth, a mod for the past two and a half years, says the inspiration for this year’s theme came from his time in Japan.

“The thought of how creepy a zombie Cat in the Hat would be struck me as interesting, and worthy of an HVZ campaign,” he said.

Glenn has been a moderator and player of HVZ, along with his partner in zombie crime, Mel Graf. She was emphatically ready for this year’s HVZ as she talked about her past memories of her HVZ career. Graf said, “I have, like, WAY too many favorite memories from over the past few years. I also love interacting with the NPC’s (non-playable characters); they’re really the unsung heroes of HvZ. It’s super fun to explain the mission to them, get them outfitted in whatever gear/costume they please, and send them out to interact with the players.”

Vasey and Meyers will begin their first official game this spring semester, where they will be responsible for creating the story, missions, prizes, and more. Vasey could not reveal too much about the next semester, but shared they plan to pay the game the tribute it deserves.

Vasey was approached after his first year playing the game to become a mod, to which he emphatically agreed. For the next two and a half years, this will remain his position. Meyers shared the same excitement about joining the mod crew. Their previous game involvement will aid them in the spring semester.

“The most exciting part of being a new mod is being able to build on the legacy. The game has been played at BVU for almost a decade now, and being able to be a part of that is incredible,” she shared.

While HVZ still has kinks to work out, including game rules and website bugs, HVZ continues to evolve and develop under each new mod. Last year, Garette Beebe, a BVU graduate, unveiled a brand new website specific to the HVZ game played here at BVU. Players are able to see a full player list, missions, and enter player specific kill codes, an aspect of the site players praise Beebe for creating. For now, HVZ is over for another semester. The future is looking bright under the direction of Vasey and Meyers!

If you would like more information about Humans Versus Zombies or would like to play the spring semester game, visit www.hvz.bvu.edu.