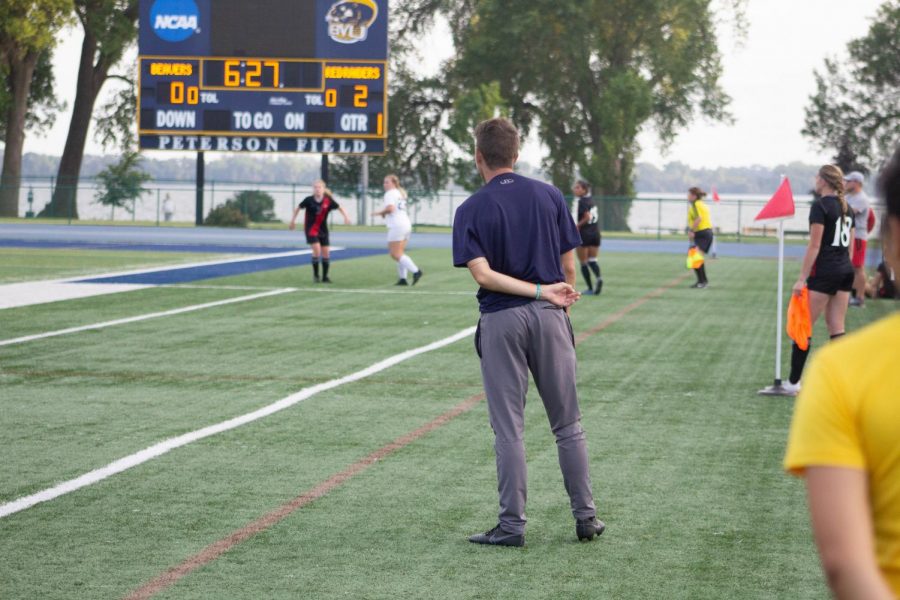 As non-conference matchups for both Buena Vista Men’s and Women’s Soccer come to a close, the American Rivers Conference schedule looms overhead.

Head Women’s Coach Benton Frayne and Head Men’s Coach Ross Minick have both faced adversity and jubilation in their debut seasons. Though year one has been tough for the pair of coaches and their respective squads, they still have much to prove with the upcoming ARC games.

Coming into the final stretch of the season, the Women’s Soccer team currently sits at 2-9 overall. With a small squad and packed schedule, Coach Frayne has asked much of his team. In return, the ladies have impressed him.

“Our two biggest takeaways are beating Martin Luther and Bethany Lutheran doubling our win total from a year ago.  Both games we held our opponent scoreless and that’s a huge accomplishment for goalkeeper McKeely Tjaden and our backline of Tobi [Brich], ‘Juice’ [Kelsi Gajewsky], Emma [Grobe] and Brenda [Nelson].” says Frayne.

The Beavers kicked the season off in style with the previously mentioned 1-0 win over Martin Luther, where senior forward Ella Wiebusch found the back of the net in the 80th minute for a late win.

It took Buena Vista a short spell of tough losses to finally tack another win over Bethany Lutheran at the end of September, where junior Holly Coogler and Wiebusch again connected for a pair of strikes that lead to a 2-0 victory.

“We scored five non-conference goals which are two more goals scored than all last year. Two of our goals came against Dordt and Monmouth late in the game which also shows our work ethic,” says Frayne.

However, though the team has worked hard all year, the lack of options from the bench has led to long matches and tired legs.

“The biggest negative is giving up as many goals as we have. This has been a combination of fatigue and learning a new style of play. We have reworked our backline and we ask to play the ball out of the back, leaving us vulnerable to turning the ball over in dangerous areas,”  says Frayne. “It’s important to understand the value of keeping the ball.”

Frayne has been most impressed with the team’s desire to improve. He states he asks a lot of the team in practice as well as in gameplay. The 13 healthy players play 90 minutes a game, and still come back the next day for practice ready to get every rep in.

“We will continue to look to find feet and play a possession style of soccer. I’m not willing to sacrifice our development to keep games cosmetic,” says Frayne. “Our attack is more of a counter where we are looking to get our outside midfielders in behind, and then get up as a team and look to press. We hope to find the back of the net more in conference play and find a way to irritate our opponents.”

The Beavers finished off non-conference play with an 0-5 loss to Waldorf this past Tuesday and look to bounce back big during an ARC-heavy finale of the year.

Having already taken losses to Dubuque (1-11) and Wartburg (0-7), the ladies turn their attention to their next foe, the Loras Duhawks.

The lady Duhawks will prove hard to upset in Dubuque, as per usual for Buena Vista, as Loras currently sits at the top of the American Rivers Conference with a record of 8-3 overall, plus a 2-0 start to league play.

The Buena Vista vs. Dubuque matchup will take place this Saturday, October 12th. It will be followed by a five–game ARC-run to wrap up the 2019 season for the Women’s Soccer squad.

For Men’s soccer, Head Coach Ross Minick and his team sit at 1-7-3 overall, with an 0-2 record at the moment.

Starting things off on a positive note at the start of the year, Buena Vista tied their first three games while scoring a total of five goals across the trio of contests. The team then hit a skid until a 2-0 victory over Crown College on September 21st tallied the first win under Coach Minick’s leadership. Freshman Jose Martinez and Junior Noah Becker were the pairing to find the scoresheet for BVU.

In total, Coach Minick’s attacking, possession–based style has netted 11 goals for the Beavers in as many games.

“I felt we came out of our non-conference games in with a lot of lessons learned. We have a lot of talent and we are so close to putting it all together. Our offensive ability has greatly increased, and we have a lot of attacking movement,” says Minick.

Just like the Women’s team, the Men’s squad is a young group of players. 18 out of the 33 on the roster are first years, with many being one of the first names selected in the starting 11.

“We constantly start four freshmen with more coming off the bench.  Once they get into the groove of college soccer, we will be in great shape. We have to continue to trust the process,” says Minick. “Something else that we need to continue to grow is the belief in ourselves. We have the squad to compete with any team we play with . . . We can’t put our heads down if something goes wrong because we have the capabilities to come back from it.”

Growth has been the key factor in Buena Vista’s positives so far this season. Having to adapt to a new style of play under a new coaching staff, the Men’s team has grown both on the field and off of it as well.

As the final stretch of the year approaches, Minick reiterates to his team having fun is the most important piece of the puzzle.

“The guys have taken to our new style of play well. We are having fun with it and it shows in the way we attack. The guys have bonded super close and that will be necessary as we get deep into conference play.  We need to continue to play for each other and give every last ounce of effort,” he says.

Like the Women’s team, the Men have played two ARC games as of now against the Dubuque Spartans and Wartburg Knights as well. Unfortunately for the Beavers, they are still chasing their first conference win as they dropped the previously mentioned pairing of games 0-2 and 0-4 respectively.

Buena Vista is only one of two teams in the American Rivers Conference with a below .500. Alongside the Coe Kohawks, the team has much to prove to the rest of the league coming into the final stretch of the year.

“As tough as our conference is, the team and coach staff have agreed that we need to continue down the path that we have started on. While we do scout other teams and make sure we match up against them, we also have to worry more about ourselves and how we are playing,” he adds.

The Men’s team will continue to trust their gameplay strategies already in use. Minick has faith this will pay off in the long run for the squad’s success.

The Men’s team is back in action this Monday, October 7th for one more non-conference matchup on the year against Gustavus Adolphus.

The Beavers begin their final stretch of six ARC games to end the year on Saturday, October 12th against the Loras Duhawks in Dubuque with the Women’s team.