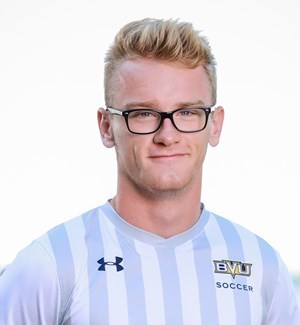 Family and soccer go hand-in-hand for Brayden Bergum. It all started at a young age, which is why it is so fun for him and why it has stuck with him for so long.

Brayden Bergum is a freshman Digital Media major from Ames, Iowa where he attended Ames High school. He played on the varsity soccer team his sophomore, junior, and senior years and as a senior, was a captain for the team.

First year Head Coach Ross Minick says even though Brayden is one of the quietest guys on the team, he always takes care of business.

“His athleticism and soccer IQ were huge for us this season on our backline,” Minick says.

Bergum credits his parents when it comes down to his biggest influences.

“They always push me to leave everything I on the field, but also making sure that I am having fun. In my opinion, there’s no point in playing soccer if you’re not having fun,” he says.

In reference to this season, Minick says, “He grew and learned a lot. I think that he still has a lot to learn though, and I am excited we get to keep him for 3 more years!”

Through Brayden’s eyes, the season taught him what college soccer is all about and what the team will have to become to be able to complete. He wants to help make a difference in the program and to continue the welcoming environment that BV Men’s Soccer has to offer that originally drew him to BVU.

Coach Minick is looking for Bergum to improve in every facet of the game for next season.

“He needs to get stronger, more technical, and be able to read the game even better than he does now. The main thing I want him to become is a more vocal leader, I know that he definitely has the leadership qualities and I think that being a freshman made him a little more reserved to use them,” Minick says.

Minick has faith Bergum will be the general of the soccer field next season. Both look forward to the possibilities of next year for the men’s soccer squad.