Disney Plus Super Heroes Plus Luke Skywalker Plus Everything Else It Owns: Disney+ Release and Review 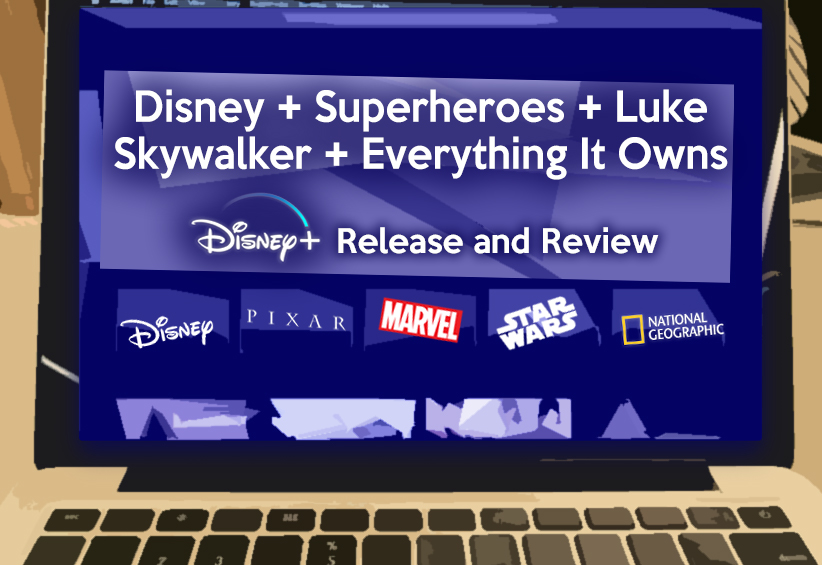 The streaming wars have been going on for a few years now, but until a month ago, it was just between Netflix and Hulu. Apple entered the competition with only 6 shows to their TV+ lineup, none being produced by any other studio. Their flagship The Morning Show starring Jennifer Aniston, Reese Witherspoon, and Steve Carrell was the only rememberable entry. Clearly, not even Apple could topple the powerhouses of Netflix and Hulu.

Then last week, the Mouse entered the chat.

Disney+ comes at an astonishingly low base price of $6.99 a month, or alternatively $69.99 a year. Verizon users get free access for a year. It does not need to create a full line of new, original content like Apple TV+, because it hosts over a hundred year’s worth of television and film. Disney+’s content dates all the way back to media before Walt Disney had founded his company, collecting even the black and white Mickey Mouse shorts.

It also relies on Generation X’s youth by grabbing early 2000s Disney Channel shows like Lizzie McGuire, Kim Possible, and That’s So Raven. And of course, it has all the princess movies, all of the Pixar lineup, and most of the Marvel and Star Wars films — where Disney is missing some of those Marvel and Star Wars movies, it’s because they’re still on Netflix. When opening Black Panther, a message reads, “Coming Soon to Disney+. Due to existing agreements this title will be available on March 4, 2020. Add to your Watchlist now.”

Is Disney+ worth it? No, not for everyone. It feels a bit like a bank robbery. But it’s not me that’s getting robbed — I feel like the Walt Disney Company is getting robbed. I have access to 600+ movies for only 7 dollars a month. That’s roughly a fifth of a cent per film. I’m not mad. I love it. Ironically, I asked you if Disney+ was worth it as I surround myself with four of my friends screaming at the TV screen because Prince Hans of the Southern Isles just told Anna of Arendelle no one could love her. I think it’s absolutely worth it.

Having every single ounce of Disney magic (and that magic’s conglomerate’s money makers) at the palm of your fingertips is the most satisfying feeling. However, it does come with the absence of some basic features. For one, there is no Continue Watching feature. It makes some sense, considering the shows on Disney+ are not as serial as those of Netflix and Hulu. When you watch an episode of Stranger Things, you have to see the one prior to understand what’s going on. Phineas and Ferb, meanwhile, doesn’t need any context. It’s a little annoying though. I want to pick up on the next episode of The Suite Life of Zack and Cody right from the front screen instead of searching it again. Comicbook.com reports that this feature will be added in the near future, but that could range from next week or early 2020.

The only other issue with Disney+ is when finding a show, if you press Play instead of choosing an individual episode, it takes you to the pilot instead of your last watch place. For example, I watched 5 episodes of Kim Possible. When I came back to pick up where I left off, I hit Play. I wasn’t taken to the 6th episode, but instead back to the first episode.

Other than those basic streaming functions, Disney+ is the most magical place in the world wide web. Even its original set-to-flop series High School Musical: The Musical: The Series didn’t flop. When it was first announced, Twitter users thought it would be for kids.

But it’s actually for the kids of 2006 / now adults who loved the original films. I figured this out when I was five minutes into the pilot and a character said hell. Sounds like a much more accurate depiction of high school than the perfect, lovestruck East High that Troy and Gabriella went to! Of course, each episode finds its magical, Disney-like, perfect, lovestruck footed ending. It’s like a cookie cutter Glee. I’m not expecting to see a sex scene on this platform, but I do think saying ‘hell’ is enough edge for Disney.

Anyone who loves magic carpet rides, East High School, galaxies far, far away, Infinity Stones, or the Simpsons could fork out the 7 dollars each month. Disney+ is affordable and jam packed with every feel-good film and TV show of the last modern century. With overdone competitors like Netflix and Hulu, and less successful newcomer Apple, Disney may have found yet another way to win the hearts and wallets of humans everywhere.