Oppression of Student Press: The Future 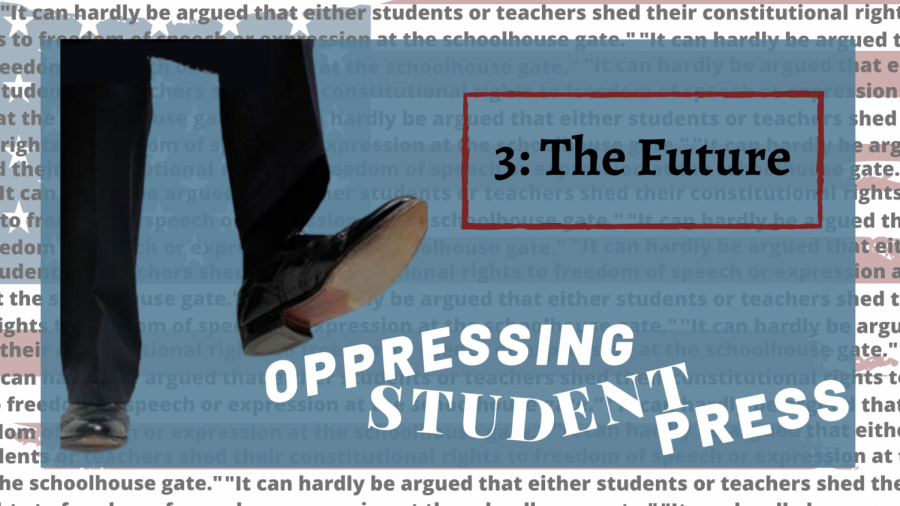 “Censorship is detrimental to society as a whole, and that is no less true in the school setting. We cannot afford to have students afraid to practice the important civic duty of holding the government accountable when it is the voices of these very students that are leading us into the future.”

Some would argue that the unknown is what makes life beautiful. This First Amendment Week series has looked at student press in that past and at present. But now, looking towards the future, who truly knows what will happen?

“What student journalists learn now is what they will carry on into their futures, and if it’s nothing but the results of the Hazelwood case, self-censorship or being called, ‘fake news,’ we will never know the definition of a free press and how it’s maintained,” said Madhira.

Unfortunately, if the past and present happenings are any indication, Madhira could be correct.

Every year, the State of The First Amendment (SOFA) provided information regarding how people view student journalists. The 2019 report asked two questions in regards to this.

The next question asked respondents whether “students should be allowed to express their opinions on social media without worrying about being punished by teachers or school administrators for what they say.” More than two-thirds (72%) of participants agreed that students should be able to post on social media without being afraid of retaliation. Forty percent strongly agreed with the statement and only 10% of participants strongly disagreed.

Based on these statistics, along with both earlier and more recent court cases scattered throughout our history, we know that the state of student press is not always something that has been supported. The SOFA shows that not enough Americans are aware of or informed about the meaning behind their First Amendment freedoms as a whole.

But what has to change so that these statistics reflect an informed, engaged, and supportive society?

According to Madhira, with all the rights and privileges afforded by the law stems a responsibility for students. If students want to have and keep a free press without combating prior review, prior restraint, or censorship then being educated and following the rules is important.

“Student journalists must use ethics and common sense when it comes to reporting, keeping their readers in mind,” said Madhira. “We must also strive to build good relationships and have streamlined communication with school faculty/staff, community members, etc. Organizations like the JEA and SPLC are great places to learn more about all of this.”

The Student Press Law Center (SPLC), as instigators of 2019 being the Year of The Student Journalist, has been instrumental in not only teaching and informing, but also in instigating change. New Voices bills, which are state-based legislation to protect the First Amendment rights of student journalists and their advisers, have made significant progress this year. In fact, a record number of state bills (11) were introduced.

“Passage of a New Voices law is a momentous leap, but it’s also just the beginning,” said Hadar Harris, executive director of the Student Press Law Center. “Informing the entire education community about the benefits of the law, and holding administrators accountable to abide by it provides the traction to ensure a healthier environment for student journalism to thrive.”

Stakeholders are the people who have the power to make change, which include students and journalists first and foremost. There is a certain tension between law and our values, as in the desire to shut down speakers who cause unrest due to anger and dissent. However, this comes at the expense of the law.

As citizens of the United States, it is our duty and responsibility to understand our rights as outlined by the First Amendment not just as a collective law, but also as a specific aspect of our livelihood that cannot be overlooked.

As we come to the end of what has been dubbed the Year of the Student Journalist, ensuring that we continue to move forward in our understanding and attentiveness to free student press is seen as vitally important, not only by the advocates mentioned, but by others who have the power to change it. The public, politicians, educators, advisors, the press, and you, yes YOU, can make a difference by educating yourself through articles, posts, speeches, and images.

Student journalists are fighting forward. But will the oppression of their rights and abilities end up completely stifling their work?

Only time will tell.

As Nadhira says, “I know our story doesn’t end here.”