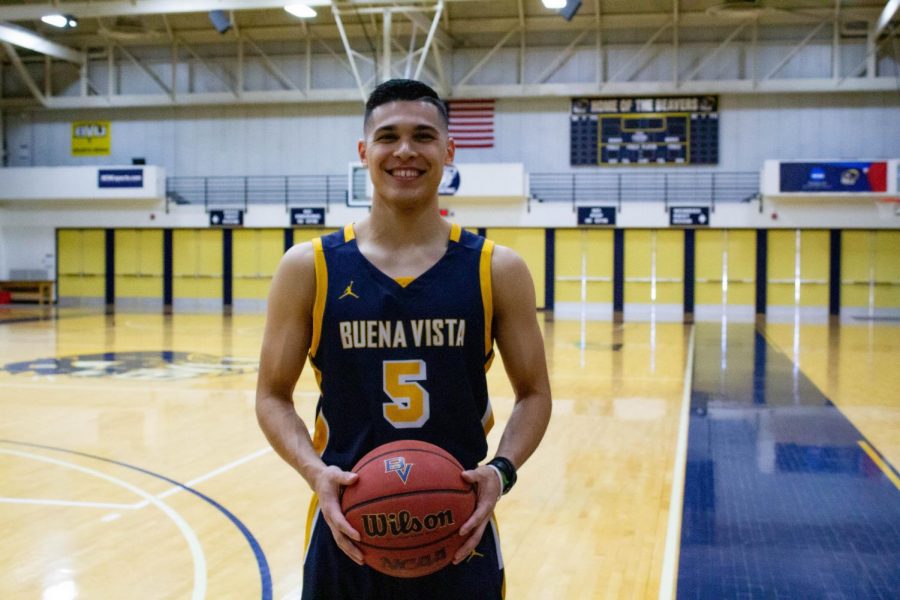 “Ever since I was 7, all I can remember is playing basketball. My dad signed me up to play in a youth league near our home and ever since then, it’s been nonstop. I loved the competitiveness about the league too, and that was the first time I could enjoy it,” Dominic Sesma remembers. “All of my baby pictures have me holding a basketball, even before I could walk.”

Dominic Sesma is a junior Sports Management major from Glendale, Arizona. He attended Westview High School and later went to Mesa Community College before making his way to Storm Lake.

Sesma averages 24.7 minutes, 11.7 points, and 3.2 assists per game. His highest scoring game this season, 23 points, was hosted at Nebraska Wesleyan for a weekend tournament when they played against the University of Ozarks.

First year head coach Trevor Johnson says there are a number of important ways Sesma contributes to the team. As one of the hardest workers outside of practice, Sesma emulates what it truly means to be successful at a college basketball level.

“He is always encouraging other guys to get into the gym for workouts and brings a positive attitude to everything that we do,” Johnson says. “Dom is a great leader, great player, and most importantly a great person and that is why I think he is such a valuable piece of our program.”

Dom’s family is his biggest influence. They are the rock, keeping him on solid ground, also inspiring him to be the best person he can be. His late coach, James Johnson, passed away this last September. Sesma says that James played an extremely important role in his life and is the reason why he still plays today. After three knee surgeries with doctors telling Sesma there was only a slight chance that he would see the court again, James was the one who believed in him.

“I know that he wants to be one of the best players in our league and I think that he is capable of doing that. He has done an excellent job of pacing our team and getting our guys playing at the speed we want in order to be successful. After a slow start shooting the ball this year, he really found his stride this past weekend in Lincoln and was able to make the All-Tournament team,” Johnson says. “I think he has hit his stride at the perfect time as we head into conference play.”

Sesma touches on the rest of the season saying that he’s looking forward to making an impact with the team. Since he left his home in Arizona, his goal has been to make Storm Lake known.

“This place is so special for many reasons and I want to make sure that people know what it is all about,” Sesma smiles.

Sesma says that the team can win games this season and with a new coach, a new system, and the culture they have made, he wants the team to represent Storm Lake in the best possible way.

“I want our team to represent Storm Lake the best way we can, cause this place is the heartbeat to Buena Vista University, we want to give back what this town has given us. We are going to do everything we can to make that happen.”

Catch Dom and the rest of the Buena Vista University Men’s Basketball team in action Thursday, Dec. 12th at 6 p.m. in Siebens Fieldhouse as they take on the Faith Baptist Bible Eagles in their next home game of the season!