A is for Awards 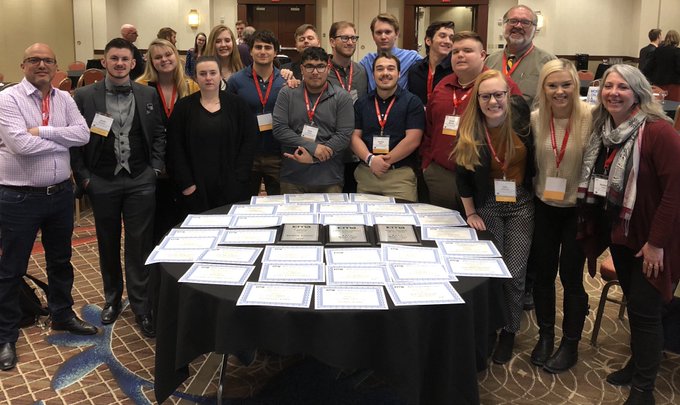 Every year Buena Vista University (BVU) sends students to a media conference in Des Moines, Iowa. These students are members of one or more of the university’s three media organizations: KBVU, BVTV, and The Tack. The conference they attend is the Iowa Collegiate Media Association (ICMA). The students had to submit work they had completed in the last year including articles they have written, sporting events they have announced, podcast episodes, and more.

This trip is led by organization advisors such as Professor Jerry Johnson, an assistant professor of digital media at BVU and head advisor for BVTV. Other BVU advisors included Professor Diego Aparicio, for The Tack, and Professor Andrea Frantz, with KBVU.

“[The ICMAs] are a great opportunity to network with media professionals and connect with other college students that you may have never met before,” said Johnson.

The ICMA conference consists of a two day stay in the Marriott hotel in downtown Des Moines. Students enjoy speakers throughout the day such as representatives from different media companies from around the state of Iowa. The ICMAs took place February 6-7.

The first day was spent listening and networking with the different members of different media organizations around Iowa, such as Dyersville Commercial and IPTV. After talking with the media members, most students visited the Des Moines Business Record where an editor discussed his career and offered advice. Later that afternoon, Iowa Radio Hall of Fame on-air announcer, Van Hardin, spoke to media students and professionals alike.

On Friday, keynote speaker, Deadra Stanton began the morning with her entertaining persona. Some BVU students were able to get involved with the speech thanks to their intuitive abilities, but none more than Omar Guadalupe. “I was beginning to feel bad for being noticed for laughing so hard that she could call me out from the crowd.” However, it was all in good fun as she rolled with it and even offered to help connect Guadalupe with people in his career. “She could inspire and entertain so smoothly and effortlessly. Her message about balance was incredible,” said Guadalupe. The rest of the day was filled with more speakers and a variety of sessions.

The main event came Thursday night with the awards banquet. As the focus for all the students who attended the ICMA conference, it represents all the work students have done in the past year, the best of which they chose to submit to the ICMAs in late September. Students could submit work in the categories of radio, television, and newspaper. Each of these categories, were separated into subcategories such as Best Newscast, Best Headline, and Best Radio Show.

The awards banquet proved very successful for BVU as they took home multiple awards between the three organizations. KBVU followed up last year’s Best Station of the Year with another one in 2020.

When asked about this, and her other awards, Allyssa Ertz proudly said, “I was honored. I was especially happy that Ella [Wiebusch], Olivia [Wieseler], and I’s journalism documentary was received with such high praise. We worked EXTREMELY hard on it, so to see that it made a difference and our hours of work paid off was thrilling.” However, she didn’t just credit the team’s hard work. “We wouldn’t have been able to pull this one off without our amazing professor and leader Andrea Frantz.”

Allyssa isn’t the only one who thinks highly of BVU professor, Andrea Frantz. Ask any one of her students, faculty members, or KBVU staff and they all hold Franz in high regard. But those close to Frantz aren’t the only ones either. During the ICMA awards, Frantz was presented with the John Eighmey Service Award. This award is the ICMA’s highest honor for those who have been instrumental in advancing the quality of media education in Iowa. The award was even presented by her friend and fellow BVU professor Jerry Johnson, who won the award back in 2015.

Overall, it was a very successful Iowa Collegiate Media Association conference for members of Buena Vista’s media organizations. It was filled with interesting speakers, new skills to be learned, questions that were asked, and plenty of awards to congratulate their hard work throughout the last year. Many of these students are already looking forward to their submissions for next year.