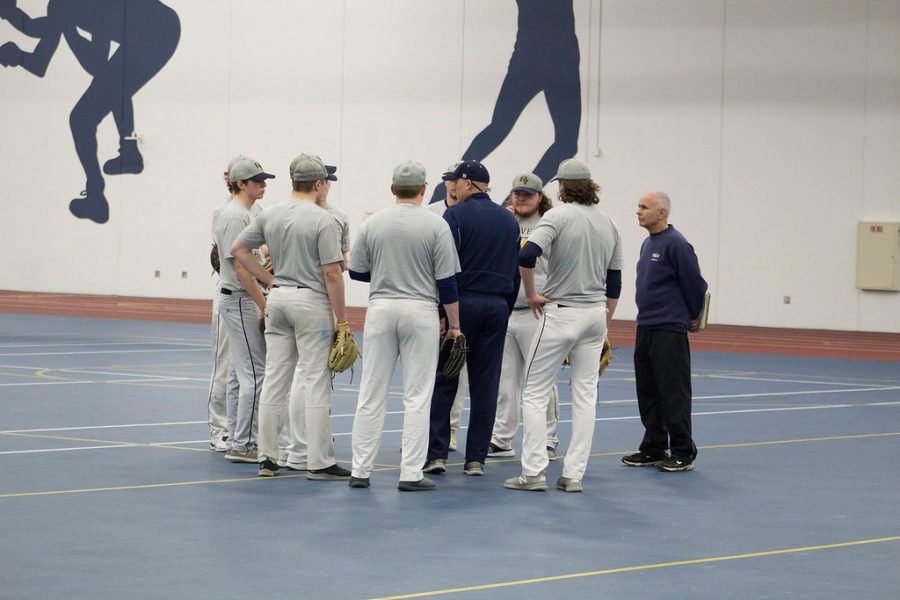 The bar has always been set high for Buena Vista Baseball.

This season, the expectation has been raised to a title-defense for Head Coach Steve Eddie and the Beavers.

After a 26-19 season in 2019, Eddie and his side accumulated a vast wealth of highlights on the year.

15 conference wins, a 14-1 streak to finish out conference play, an ARC Tournament three-game sweep for the team’s first ring since 2014, and an NCAA Regional Tournament victory over St. John’s University were just a few of the many success stories that create momentum heading into this year.

For Eddie and the squad, the focus is on fixing last year’s mistakes and improving on the many positives.

“We have to remember everything that happened to us last year,” says Eddie. “We played very poorly early in the season because I think we don’t think our guys realized how many good teams were out there, and we were hoping we would win games without paying attention to details.”

Fighting complacency, Eddie understands that when the ball gets rolling for this BVU side it’ll gain momentum, and quick.

“Once we figured out how to focus and enjoy competing, things started going our way.  It will be important to get off to a similar start this year.  We need to pay attention to doing things right and judge ourselves on our competitive nature rather than the scoreboard.”

Picked to finish in 2nd place in this year’s American Rivers Conference, the leagues head coaches see the Beavers placing in the same final spot as they did in the 2019 regular season. However, with 58 total votes (2 of which were 1st place ballots) compared to Coe’s 63, the title chase is certainly on for BV.

Beginning with 14 straight non-conference games before taking on the Simpson Storm post-Spring Break. Speaking of Spring Break, the Beavers will once again travel southwest to Tucson, Arizona for their week of seven games in the hot spring sun.

With a strong start to the season, Eddie and the Beaver will be well set up for a strong year with a deep roster and rotation.

“I expect our team to begin the year with an understanding of what it takes to win and the understanding of how difficult it is. We return a lot of players who played in some big games last year, I hope that experience can help us play the game with the attention to detail it takes to be successful,” says Eddie.

Leading the way for Buena Vista on the mound and at the plate are Seniors Gage Smart and Bryce Rheault respectively.

Tabbed as Second Team Preseason All-Americans by D3baseball.com back in January, the two were dominant in the American Rivers last year.

Rheault, finishing his 2019 campaign as the ARC Position Player of the Year, was also named a Second Team All-American last year by the American Baseball Coaches Association.

During his accolade filled season, Rheault finished with a batting average of .399 alongside 75 hits, six doubles, five triples, three home runs, 21 RBI’s and an OPS of 1.002.

Toeing the rubber as yet another Second Team All-American for BV, Smart finished the year with an ERA of 1.14 in 23 appearances as a closer. Smart also chalked up a team-high 54 strikeouts plus six earned runs and 19 hits given up in 47 innings of relief work.

Safe to say, they’ll be key contributors to the team’s success this year.

“Bryce and Gage are deserving of all of their awards they earned from last season, but they realize the success of the team put them in the position to be honored,” says Eddie.

Eddie adds, “They lead us with their confidence and enjoyment of competition, if we can get a few more guys to follow their lead, it will be a great season.”

Following in the lead of Rheault and Smart will be a very strong returning core plus some new faces to the roster.

Underclass too will play a major role in Eddie’s side; Sophomore Logan Mueller retains his spot at third base while Freshman Zack Beekman is the squad’s new five-hole slugger.

In their final season as Beavers, Senior leaders Tyler Tennyson and Joe Rock round out the starting nine for Buena Vista.

Already in action, BVU traveled in a cross-Midwest trek to Topeka, Kansas to begin their season with a trio of weekend games against Hamline University.

Sweeping the Pipers with a final score of 9-9, 16-5 and 4-2 across this past Friday and Saturday, the Beavers have swung their hot bats to a hot start.

Tyler Tennyson and Casey Hendricks picked up their first wins of the season on the mound, while Henrichs and Tennyson combined for a pair of home runs.

Buena Vista will look to continue their season-opening win-streak this weekend in a four-game series with Grinnell College back in Topeka. Games one and two will be played at noon and 2:00 respectively on Saturday, with games three and four to follow at 11:00 and 1:00 on Sunday.

The team’s schedule can be found here, as well as the full American Rivers Conference Preseason Poll.