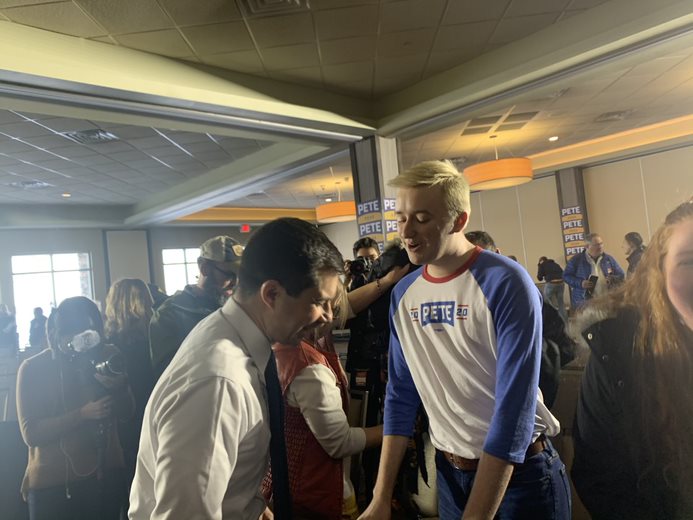 The way that stories work for the Tack is that we meet each Monday night, we choose stories we want to write, and then work on them throughout the week. We submit them by Sunday and they’re published the next week. This story is too important to me that I cannot wait for its approval tomorrow night, because it’s on my mind this Sunday, March 1st. I will pitch this story tomorrow as if I have not already overthought it, written it, cried, and stressed over something that I could have expected to eventually happen.

Not everyone may think it’s important, but it’s important to me — Pete Buttigieg has dropped out of the race for the democratic nomination for the presidency.

For the first time in my twenty years, I became politically involved. I attended rally after rally and saw Pete every chance I could. I was able to convince my friend Emma to drive me an hour to Okoboji, where I was able to shake his hand. After reciting what I wanted to say to him at least 10 times, I told him in the shakiest voice, “I just wanted to tell you thank you for doing this. I wish I had a gay president in office when I was younger, it would have made me more comfortable with myself, because all my life, I’ve only seen old, straight men in office.”

He laughed at this, then said, “It’s time we change that, don’t you think?”

On the inside, I screamed, “YOU’RE PETE BUTTIGIEG AND I AM ME AND I MADE YOU LAUGH,” but to him, I said, “I would love to change that.” It was then that I was fueled by the fire and passion that comes from Pete’s campaign. Pete harkens on the idea of belonging, that an America will someday exist when Donald Trump is no longer in office and instead, we can build a country where everyone is apart of a majority.

Being gay and coming from Mississippi, a state known for its anti-LGBTQ+ agenda, that meant the world to me. Coming to Iowa has been a lot of things for me, but being surrounded by people who believe you are allowed to want who you want has been the most empowering thing. Storm Lake is not the most progressive place on earth, but it’s far more ahead than my home state. I’ve said many times that I feel so enabled to be myself here that I feel more like I’m walking the streets of New York City and less like the hallways of Buena Vista University.

So to see a gay man trying to win the presidency?! I was so excited. I decided that I had to get involved.

At first, it was small. I committed to caucusing.

Then, I volunteered to hold a door open when Pete came to campus in January.

Then I joined on his precinct team for caucus day.

And to prepare for caucus day, I found myself counting down the days and carrying a clipboard through the snow and knocking on doors. I would smile and say, “Hi! I’m Blake, and I’m here in Storm Lake with Pete Buttigieg’s campaign. Would you be interested in caucusing for Mayor Pete?”

I posted about Pete on Instagram. I talked about him to friends. I asked strangers about him. Caucus night came. I convinced strangers to join our cause. I climbed on my best friend’s back at my precinct location and waved around a sign that read CAUCUS FOR PETE. The results came out (after the most impatient week of my life), and Pete had garnered the most delegates. I felt for the first time in my life, I was able to speak politically, and no one could silence me.

The New Hampshire primaries came soon after, and Pete did not do as well as Bernie.

Then last week, Nevada, and Pete did not do as well as Biden.

I did not feel as though we could be stopped yet, though. We were still in third. I was only in Iowa, but I could still help make phone calls to undecided supporters in upcoming primaries.

Today, March 1, I was sitting with friends, when one read a tweet. “Pete Buttigieg rumored to end his campaign?” I brushed it off as fake news. I got ready to Google it to verify that statement, when another friend spoke up. “Oh, shit, yeah — it’s the first article on Apple News.”

I decided this might be real, so I went to Twitter instead. I shut my computer when I saw what was trending in the United States: #ThankYouPete, Mayor Pete, @PeteButtigieg.

I told my friends I needed to go to my room to finish up some homework, and as soon as I stepped out, I felt the tears. I felt the lump in my chest. Negative thoughts were spinning in my head.

This is my fault.

I didn’t knock on enough doors.

I didn’t convince enough of my friends to caucus with me.

I didn’t ever sign up to make phone calls.

I cried all the way to my room. I felt hopeless. No one I could talk to would understand. My mom has never liked politics, my friends were not as invested. I realized that I was among the first generation to mourn the candidacy of a gay president. The queer community that was rooting for Pete was the first to ever feel like this. This is the first time in our country’s history that we got to give a popular vote to someone like us.

And that’s where I found my strength. I got to help give my people a voice on that massive platform. Pete went home to South Bend, Indiana that night and verified the rumors. I was content. There are still so many great candidates to choose from, but as I look around this dorm room that I’ve plastered in PETE 2020 posters and buttons, I know none of them can fill me with as much hope as he did.