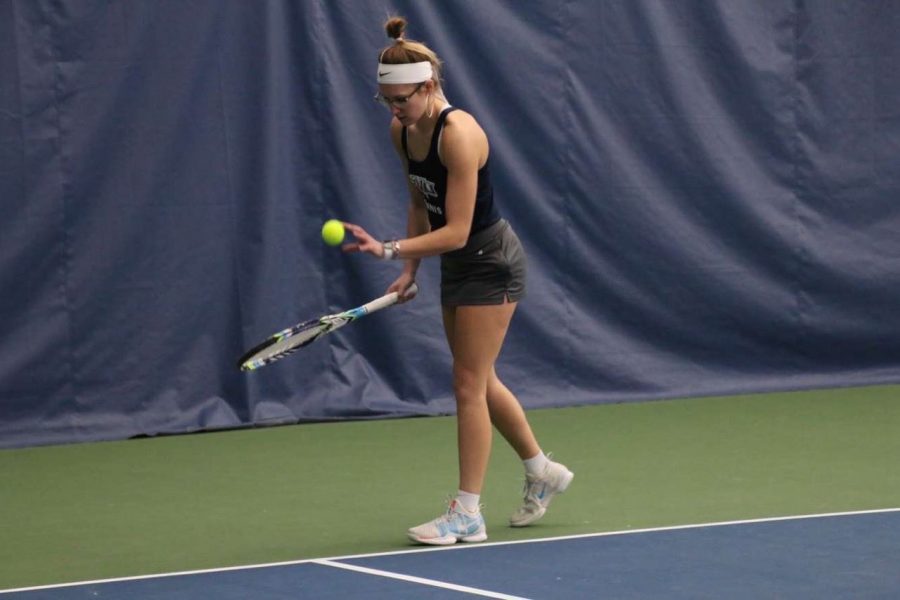 Though it’s been a tough season for the Buena Vista Women’s Tennis team so far, Head Coach Dan Taylor and the Beaver ladies grabbed a statement win.

The Fall season was another tough go for the Beavers much like years prior; entering this past weekend at 0-12 overall, BV was still chasing their first victory of the year.

BV also finished their 2019 American Rivers Conference Play at 0-8, blanked by the rest of the ARC.

October 11th and 12th spelled the end of the first half of the year for the Beavers as the ARC Individual Tournament was then followed up by a nearly four-month hiatus before resuming play.

However, the break proved fruitful for Buena Vista.

“Players can come into the spring season a little rusty if they haven’t picked up a racquet during the winter break. After the first day or two of practice they were hitting at the level where they left off last fall,” says Taylor.

With a young roster composed of just six women and one lone Senior in dual-sport athlete Destiny Einerwold, Buena Vista hit the road to Owatonna, Minnesota to resume their season after the winter break.

On the agenda for the Beavers was a pair of non-conference matchups to start the short Spring season beginning with North Central University, while following that match would be a showdown with the University of Minnesota Morris.

Alexis McGinnis and Lexie Bruns shone in the #1 doubles match to begin the day, just narrowly snagging an 8-6 thriller victory. With momentum on their side, Buena Vista flew off to a fast start with a three-match sweep in #1, #2, and #3 doubles.

With the wind in their sails, the Beavers performed at the top of their game, top to bottom. McGinnis took a big 6-2/6-0 victory in the #1 singles match, followed by a 6-1/6-2 win for Nicole Lange in the #2 meeting. Lange also nabbed her fourth win of the year.

From there on, Bruns defeated her #3 opponent 6-4/6-1. Meanwhile, Einerwold added on another victory 6-2/6-1, and Deanna Schaffer rounded out the day with a 6-3/6-1 win. In the #6 singles match, Jadyn Anderson took a win by forfeit to end the duel all in favor of the Beavers.

With the 9-0 sweep over the North Central Rams, the Beavers picked up their first dual victory since 2017.

Also claiming his first head-to-head victory has the BVU Women’s Tennis Head Coach, Taylor was ecstatic over his team’s performance.

“One of the biggest areas of improvement I saw on Saturday was in doubles,” says Taylor. “To see us get doubles wins on Saturday shows that they have made tremendous progress with playing more aggressively, getting themselves in the right positions on the court, and using better strategy when they are playing points and selecting shots to hit.”

Not done just yet for the day, BV took a short break and resumed play against Minnesota Morris hours later.

This time around, the natives of the North got the best of Buena Vista as Minnesota Morris took a 7-2 win to go 2-0 on the day.

For the Beavers’ pair of triumphs, Bruns won a long three-set thriller 7-5/11-9 while Einerwold dominated the #4 singles match 6-0/6-2. Both ladies went a perfect 2-0 on the day in their singles matchups while also picking up one double win apiece.

“They put in a lot of work last fall, and it really paid off for them last weekend as they are now seeing positive results from their dedication,” says Taylor.

“I give them so much credit for not getting discouraged after not getting a team win last fall. They stayed with it, stuck together, kept working to improve, and all of that makes the win on Saturday very satisfying for both the players and for me.”

Coming home with their first victory on the year in tow, the Beavers have another short break before resuming their season once again.

Coach Taylor and the ladies will be back in action over Spring Break for a trio of matches in Hilton Head South Carolina.

With time running out for Einerwold in her final season as a Beaver, her and Coach Taylor will look to carry the momentum taken from Saturday forward into the final phase of the year.

“I am extremely proud of all of our players. Destiny Einerwold went 3-1 on the day, and I couldn’t be happier for her to have such a terrific performance as a Senior. Lexie Bruns stood out as well,” says Taylor.

The women took on St. Mary’s College of Maryland, Agnes Scott College, and McDaniel College over the course of the week to finish their 2019-2020 season.