The Divorce Of A Dynasty Part I: The Future 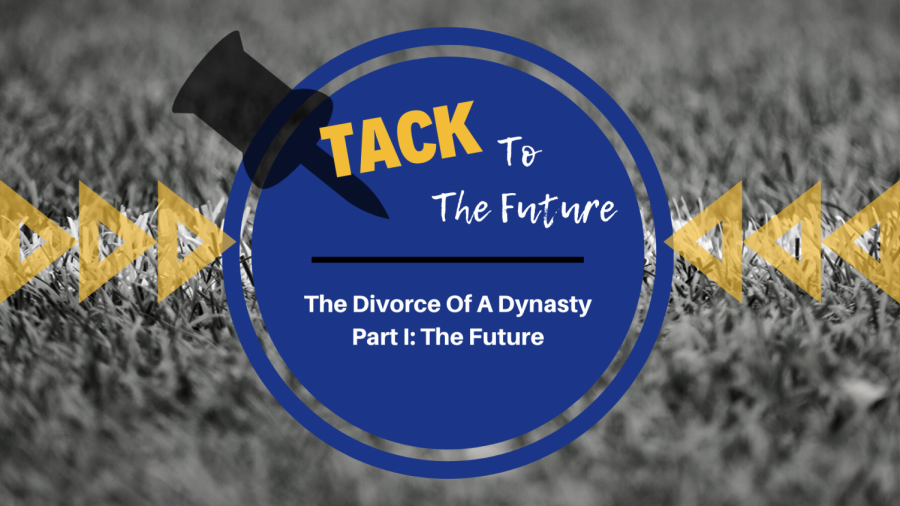 A couple of weeks ago the unthinkable happened and the Tom Brady / Bill Belichick era in New England came to an end after 18 consecutive winning seasons, nine AFC championships and six Super Bowl titles. In case you haven’t heard; Tom Brady will be under center for the Tampa Bay Buccaneers for the 2020 season and the Patriots will have to adapt to life without Tom Brady. But how difficult will that be? In the second part of this two part post we will look back on the past two decades of dominance that took place in Foxborough, Massachusetts and I will give my in-depth analysis of whether Belichick or Brady should get the credit for their dynasty but more on that next time.

It had been rumored that Brady and Belichick hadn’t been seeing eye to eye and that a few seasons ago Belichick was close to trading Brady in favor of starting current San Francisco 49ers Quarterback Jimmy Garoppolo. That didn’t end up happening since, according to reports, Robert Kraft stepped in and told Belichick that he could not trade Brady. Instead they traded promising understudies Jimmy Garoppolo and Jacoby Brissett elsewhere in the NFL. If you’ve had a conversation with me on this topic or if you follow me on any Social Media platform, you will know that I have a strong opinion on who is really responsible for the Patriots success. So as you can imagine, I was excited to see how Tom Brady would play without the help of the most intelligent football coach of this generation, maybe of all time, and if the Patriots would continue to dominate without the player that is considered by many, obviously not by me, but by many fans and analysts to be the greatest Quarterback of all time. If that would have happened a few years ago then it would have been the biggest News story (not just in sports but all news) in the United States for months. Now that it has finally happened it doesn’t feel as significant as it should do in the media because COVID-19 has completely overshadowed everything else in the

world. Unless you’ve been living under a rock you know exactly why that is but I’ve always been an optimist and I’m going to assume the season will go ahead as planned. Assuming I’m right, who will be better off this season? Brady or Belichick?

How will Brady perform in Tampa and how will that affect his legacy?

The impression that I’m getting is that a lot of Patriots “fans” want their team to fail so they can make the claim that Brady was the reason for the Patriots success. Either that or they have convinced themselves that the Patriots will be a losing franchise for the first time in nearly 20 years, dismissing the fact that they have an all-time great coach on their sideline that is yet to let them down. I wouldn’t be surprised if a large chunk of the Patriots fan base ends up becoming temporary Buccaneers fans because their loyalties lie with their favorite player rather than the franchise, it seems as though this has already happened with the rise in popularity of the Tampa Bay Buccaneers over the past few weeks on social media. It will be interesting to see how many Patriot s make every excuse in the book for Brady if he doesn’t play as well in Tampa and end up rooting for their team to lose just to make Brady look better, and they can say “Look he clearly isn’t a system quarterback.” Or “See I told you Brady was the glue holding the Patriots together, they’re awful now that he’s gone.” But will either of those happen?

First, we must constitute what exactly is a good season for Tom Brady with the Buccaneers? People don’t seem to remember but the Bucs have some of the best offensive skill players in the league. Mike Evans and Chris Godwin are two very good receivers, arguably one of the better, “One two” receiving tandems in the NFC. O.J. Howard is also one of the most talented and promising Tight Ends in the league. These guys aren’t exactly scrubs and Buccaneers coach Bruce Arian’s isn’t a bad offensive coach by any means. Jameis Winston, who I have never thought much of as a Quarterback, lead the league in passing yards this past season

with over 5,100 yards and threw for 30 touchdowns. He also threw for 30 interceptions but a fair few of those interceptions were on tipped balls. My point is, if the Buccaneers can have one of the best offenses in the NFL and finish third in scoring with Winston under center, who is not a very good QB in my book, then what kind of numbers does Brady have to put up to prove he wasn’t a system quarterback. Obviously, Brady is better than Winston, so I guess over 5,109 yards and 30 touchdowns?

I’ve said on numerous occasions that QB wins are not a real stat but not everybody seems to think so. Unless the Buccaneers defense improves, I can’t see them making the playoffs, especially not when they have to play the Saints, Panthers, and Falcons offense’s twice a year. Realistically I can see the Bucs going 9-7 and Brady putting up respectable numbers, most likely posting fewer passing yards than Winston but considerably less turnovers. This prediction is based on the talent he has around him, the knowledge, and discipline that he can bring to the team after playing for Belichick.

Going off the way Brady played last season, when the Patriots special teams and defense played so well that he didn’t need to play that well to win I can’t see him elevating the Buccaneers from a 7-9 record to a high seed playoff team, just like I can’t see Brady leaving the Patriots being fatal to their 2020 campaign.

As for how it will affect his legacy, it will be the same as when Joe Montana played for the Chiefs in the twilight of his career after a decade of success with the 49ers. Regardless of what he does it (realistically), whether good or bad, it won’t change anybody’s opinion of him. To a lot of fans, he will still be the guy who is responsible for winning six Super Bowls over an 18-year span. He could throw for under 4,000 yards and finish with more interceptions than touchdowns and fans would still make excuses for him and blame everybody but him. On the

other side of the coin if Brady ends up throwing for more yards than Winston did in 2019 (Something I would advise against betting on) and leads the Bucs to a playoff berth, the fans that insist he is a system Quarterback and a product of Bill Belichick will say something along the lines of “of course he had a good season because look at all that talent he had around him.” So, I don’t think anything that happens (realistically) down in Florida is going to significantly affect his legacy. How the Patriots fare without Brady though? That maybe a different story.

Life after Brady in New England

I stated before that Patriots fans on the whole seem to be convinced that they are doomed without Tom Brady under center. Going off the way he played in 2019 I have no idea why that is. The Patriots defense and special teams were more valuable to the Patriots division title season than their offense. Brady posted mediocre number as did the offense in general against playoff caliber teams.

To look at some stats for the 2019 team. The Patriots finished with a 12-4 record despite the offensive drives only lasting 30.53 yards, ranking 20th in the league and scoring 1.99 points per drive ranking 18th. To look at the same stats on the defensive side of the ball, the average length of a drive for the Patriots opponents lasted 23.40 yards and they allowed 1.02 points per drive, ranking first in both categories. The Patriots defense ranked first in drive success rate. The defense also recorded 36 turnovers and allowed an average of 14.06 points per game. I’m not saying the Patriots offense won’t take a step back but if the Patriots defense remains elite, I am extremely confident that Bill Belichick, who in 2008, managed to win 11 games with a Quarterback that required a white stick to find the center when he played in Dallas seven years later, can put a game plan together with a QB that is good enough to start in the NFL, can put a game plan that can average more than two touchdowns and a field goal on the season. So, don’t

worry real Patriots fans, I’m sure you will not experience your first losing record for almost two decades consecutive year because on the contrary to popular belief Tom Brady didn’t play every position on the field on both sides of the ball.