Battle of the Wild West I 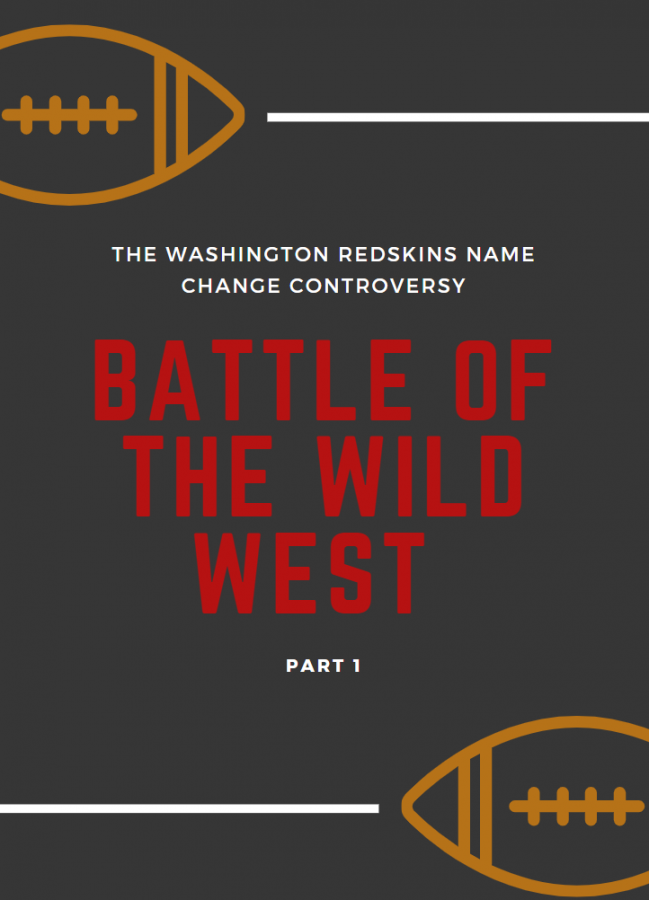 This three-part post will look at the recent events surrounding the Washington football team, previously known as the Washington Redskins, and their plans to re-name and re-brand due to recent controversy.

Please note that this blog post was put together before any of the sexual harassment claims against Dan Snyder and other members of the Redskins were brought forward. The Tack, including myself, does not condone those actions, whether they are proven to be true or false.

The first article of the three-part blog post will focus on the name change itself. It will go into detail about how the team has been forced to change their name and how this has killed one of the most historic rivalries in American sports, The Washington Redskins vs. The Dallas Cowboys. Treat part’s two and three of this blog post as my speech at the funeral of the rivalry as I look back on the best games that took place during it.

In the nation’s capital-city it seems as though the once proud franchise; the Washington Redskins, will go through a re-name and a re-brand. Not only is the team being forced to change the name that they have had since 1933, they’ve also faced pressure to remove all Native-American imagery associated with the sports team. In case you are unsure of the details that have led to this decision, allow me to fill you in.

In previous years, Redskins owner Dan Snyder has occasionally been in the spotlight due to the team’s name. Most recently Muriel Browser, Mayor of Washington D.C. stated that it is “past time” for the Redskins to change their name. How strange that she made this stance in an election year when she is desperate for votes. In 2013, when interviewed by Erik Brady of USA today, Snyder famously made his stance on the Redskins name very clear stating,

“We’ll never change the name. It’s that simple. NEVER — you can use caps.”

That was of course before political correctness and social justice became the latest fashion. In the past month, Fed-ex, the sponsors of the Redskins’ stadium since 1999, threatened to pull their sponsorship deal unless the team officially changed their name. The formal announcement made in a tweet by ABC news stated,

“JUST IN: @FedEx has asked the Washington @Redskins to change its name. Here is the statement: “We have communicated to the team in Washington our request that they change the team name.”

I find it funny that Fed-Ex had no problem whatsoever with the team name for almost 21 years. Especially when the stadium name was officially changed to “Fed-Ex field” in 1999. This resulted in Fed-Ex’s stock price increasing from 31.27 points to 45.90 points. No, Fed-Ex had absolutely no problem then because they were focused on expanding their profit margins. Today Fed-Ex’s average stock price is 134.14. I believe they owe Dan Snyder and the Redskins a great deal of gratitude for the brand awareness that they have generated for them. Instead, they’re more concerned with being politically correct to avoid profit loss.

Nike recently boycotted the Redskins by pulling the plug on manufacturing Redskins sports attire, pulling the football teams merchandise from the shelves. After all these years Nike has decided that they will no longer sell or manufacture any of their merchandise until Snyder changes the name of his team. This became evident when “a source” from Nike released a statement to the athletic which said,

“A source at Nike recently told The Athletic that Nike “will not feature Washington [Redskins] gear until the name is changed.”

Just out of curiosity Nike, what would you like the Redskins to change their name to? Perhaps the Washington Sweatshop Workers? The Washington Child Laborers? The Washington Modern-day Slave-owners? Their mascot could be an orphaned Chinese child in chains stitching a Nike T-shirt with the slogan “Just do it” underneath. Would that be more in line with your company’s code of ethics? Quit acting as though you are “woke” social warriors that care so much about justice and equality, when your business is built on what is effectively slavery!

Nike have used child labor to manufacture their products for decades. This fact first became public knowledge in 1991 when an American Labor activist named Jeffery Ballinger published an article revealing the harsh realities of the conditions that children are exposed to. If you are interested in researching this topic, I highly recommend Ballinger’s article. Do not be fooled by Nike’s exceptional Public Relations department and quotes similar to Nike chairman Phil Knight when he said,

“Nike is a good citizen in all of the countries that it operates in.”

They have clever manipulation tactics attempting to distract you from the fact that sweat shops are still used by Nike. According to the United Students against sweatshops organization, in a quote from Marc Bain of Business Human Rights.org, in an article from 2017,

“-workers at a Nike contract factory in Hansae, Vietnam, suffered wage theft and verbal abuse, and labored for hours in temperatures well over the legal limit of 90 degrees, to the point that they would collapse at their sewing machines. Nike is also accused of cutting jobs at the Hansae factory and pulling production from a factory in Honduras with a strong union presence…”.

Refusing to sell Redskins products makes Nike a two-face fraudulent company and I personally hope that one day enough people realize this to bankrupt them.

Unfortunately, Nike’s marketing and Public Relations are far too powerful to ever let that happen. If you know me personally and you see me wearing anything made by Nike, I can assure you it was either purchased second hand, or as a gift, therefore I am not contributing towards their GDP and supporting them.

Context to the name

The Redskins were originally known as the Boston Braves and shared Fenway Park with the Boston Red Sox of Major League Baseball. They adopted the name “Redskins” in 1933 because the Red Sox got their name from their uniform having red socks. The Native American theme was already present due to the name Braves. For those of you that are unsure as to how that relates to Native American imagery, a Brave was a name given to Native American warriors during the first nations war in the 1800’s. The (then) Braves also have a tie to the baseball team that they shared Fenway with, so they took the name Redskins after the color of their jerseys.  It has also been reported that part of the reason why George Preston Marshall, who co-owned the Braves, changed the team name to “Redskins” was to honor their Native American coach. William Henry “Lone Star” Dietz, who was an assistant coach for the Redskins in 1933 and 1934. The Washington post released an article titled “The timeline of the Redskins name change debate” they quoted George Preston Marshall’s statement from 1933,

“The fact that we have in our head coach Lone Star Dietz, an Indian, together with several Indian players, has not, as may be suspected, inspired me to select the name Redskins.” Therefore, the name change was something done out of respect.

The logo that is synonymous with the Redskins today was adopted in 1972 with careful consideration. The logo was designed by a Native American Black-Fleet leader named Walter “Blackie” Wentzel. Wentzel took the inspiration from Chief “Two Guns” White Calf. Wentzel said in an interview with the Washington Post in 2002,

“It made us all so proud to have an Indian on a big-time team. It’s only a small group of radicals who oppose those names. Indians are proud of Indians.”

Well Mr. Wentzel, on behalf of Fed-ex, Nike, and those who were offended over something that never concerned them, I apologize.

There will always be something between the Cowboys and the Indians

The biggest rivalry in NFL history is The Washington Redskins vs. The Dallas Cowboys; except for The Packers vs. The Bears to the longevity and history they have. Cowboys legend Roger Staubach once stated that,

“[The Redskins and the Cowboys] has always been such a huge rivalry because there will always be something between the Cowboys and the Indians, although I don’t think it’ll ever be as intense as it was in the 70’s.”

Staubach was absolutely right. The historic significance of the battles fought between the Cowboys and the Native Americans in the Old West is something that intensified this rivalry far more than any other and as Staubach said,

“It was never more intense than when both teams were at the top of their games in the 1970’s.”

The two teams were at each other’s throat before the Cowboys had even played their first game. In 1959, when the NFL was ready to expand beyond its 12 existing teams, Redskins owner George Preston Marshall was strongly against having a team in Dallas. Marshall felt this way because he considered everything south of the Mason Dixon line Redskin territory and refused to let a southern expansion team take away his fans and his monopoly on prime-time television slots in the South. To ensure that the Cowboys got a vote from Marshall, Cowboys (then) owner, Clint Murchison purchased the rights to the Redskin’s fight song “Hail to the Redskins”. Murchison refused to let Marshall play it at Redskins games unless they voted for Dallas to come into the league, so Marshall caved and voted in favor of Dallas. It’s safe to say that this rivalry was heated from the very beginning.

So please look out for the next chapter subtitled “Pro football’s epic of the wild west: A thing of the past” for the first half of the top 10 Cowboys vs Redskins games ever played.