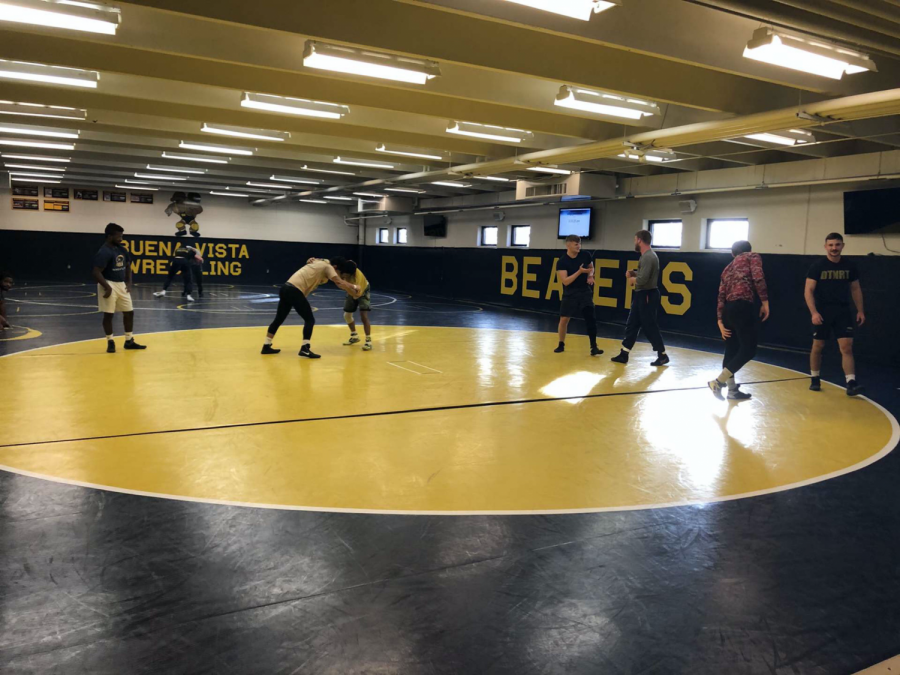 The Buena Vista Wrestling team has stood out amongst its peers this Fall with incredible acts of kindness.

In late September Freshman Diego Aguilera saved a Walmart co-worker’s life on his first day on the job, calm and collected as he would be on the mat.

In October the team was taken to the beach and lighthouse of Scout Park just West of Siebens Fieldhouse to both practices in unique conditions and clean the campus they call home, showing the same poise they would if they’d be mid-sprawl in the second period.

Time and time again this year, the Beaver Wrestlers have impressed with character and determination. The fire that drives them to be standout members of their community is the same that sets up a successful season in the not-so-distant future.

On September 21, the American Rivers Conference decided to delay Winter athletic competition until 2021. Aligning themselves with the majority of Division III conferences across the nation, BV’s Winter sports teams including the Beaver Wrestlers await January.

For third-year Head Coach Mark Rial, his assistant Sean White and the duo’s roster of 24 wrestlers, the wait will prove worth it.

“Early on we were doing some small groups and then went to two larger groups and now we are all together. The team has been doing a great job of being responsible outside of the wrestling room. We are taking extra precautions that take a little more time. We also keep them to their own space and try to have little crossover during workouts,” says Rial.

“We have been very positive about the delayed start of competition. Even with the extra precautions, we feel this extra time is a good thing,” adds Coach White. “The adjustment with practice and different restrictions on campus have made team bonding different than a normal year but any difficult time is a good time to grow and I think our team has been doing just that.”

With Wrestling being the close contact, physical sport that it is, Rial and White had to create a two and a half-page protocol based on the regulation set by BVU and USA Wrestling, even beginning their mat work with two weeks of no contact.

Wrestling on air, the squad did its part to remain safe and overcome the early semester spike in cases. Now, they’re hard at work, with masks on at all times, and await January.

“We split the team into 3-4 man groups and had designated times for those groups to come in to keep contact with others minimal,” says White. “In order to enter the wrestling room, temperature is taken and must have a green checkmark on your BVU symptoms checker. We log everything from the time someone gets their temperature checked, to when they enter and exit the room.”

Rial also notes how he’s proud of the way his team has stepped up in a time of adversity, both on the mat and off it. The team’s community service efforts and commitment to preventing the spread of COVID-19 have not gone unnoticed.

“I am very proud of our guys that are doing those things. It doesn’t matter how good of a wrestler you are if you’re not a good person and are willing to put yourself out there and help people. You are helping others but also helping yourself, it works both ways,” says Rial.

The team’s 2020-2021 season was initially set to begin in early November, much like a typical year.

However, an updated schedule is still being created. While the team does not know exactly when they’ll be able to compete against their American Rivers Conference Rivals for the first time this season, their goals remain the same.

A standout performer from last season, Junior Byron Fleming at the 125-pound weight-class tallied the squad’s second-best record at 21-17. Fleming also picked up three pins and eight technical falls for a team-best and looks to set that explosive pace once again for the Beavers.

“We all want to push ourselves harder to reach a level of competition no one has seen from this team yet,” says Fleming.

Fleming is one of the many Beaver Wrestlers taking part in the aforementioned community cleanup efforts, and also leads the way for his squad as a model student-athlete.

This year, both the coaching staff and the roster are setting a higher standard for the program.

“We are pushing ourselves and the incoming younger guys to be disciplined in the classroom as well,” adds Fleming. “Individually, I want myself, as well as others, to reach academic All-American status. I feel like pushing ourselves outside the wrestling room will carry over into our wrestling, work ethic, and our desire to win.”

“We look for everyone to fight. Each individual has set goals for themselves on where they want to see themselves at the end of the year, but if we just give our best effort every day and fight, then we will find success. That is what we expect and strive for every day,” says White.

“The team is shaping up well and has been working hard,” adds Rial. “We are still a young team and I look for a few of our sophomores to have a bigger impact along with our upperclassmen. We have some new guys that we are excited about and we are expecting big things out of them.”

Senior Don Phillips II also returns for his final year collegiate competition, fighting his way to a 21 win season in 2019-2020.

With the addition of Senior Teyler Bruch, Sophomores Floyd Miller, and Axel Hernandez, and the rest of the team, the Beavers look to improve upon their 3-7 finish last season and reach new heights in 2021.