People of Color That Died Due to Gun Violence 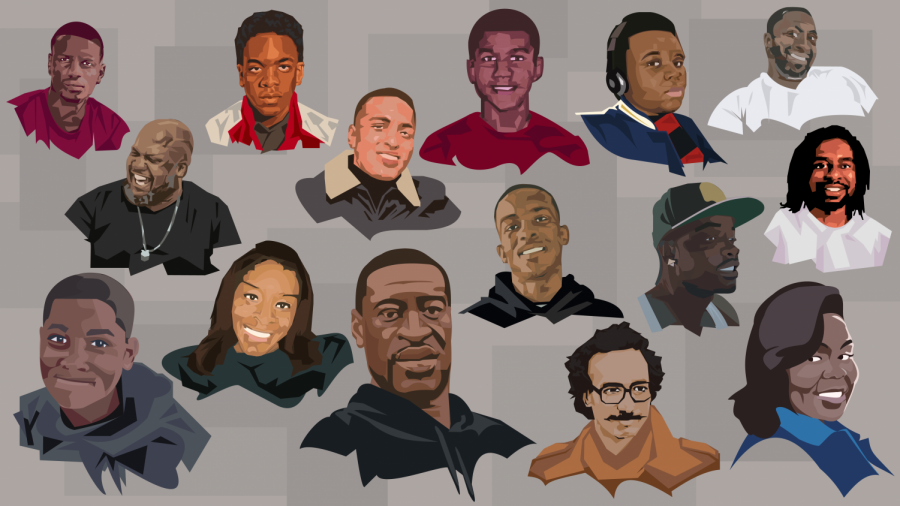 Over the summer my social media feeds, and hopefully yours as well, was full of posts about how to support black writers and creators. In the process I stumbled upon Bullets Into Bells, a free eBook that contains a collection of poems about gun violence. I picked it up on Apple Books in September and have been amazed by the people of color’s names I’ve never heard. Maybe you have never heard of them either. With that in mind, I am writing this in hopes of memorializing the victims so you will know their names. Even more, as the Internet has echoed for the last 226 days since the murder of Breonna Taylor, I write this in hopes that you will say their names and demand justice.

Tahar Djaout was an Algerian poet and journalist who was gunned down in the summer of 1993 in the streets of Algiers. He died a week after being shot at the age of 39. His killers, a terrorist group, admitted that they killed Djaout because he wrote of progression within minorities.

Djaout’s best work to summarize his life is the statement he wrote, “If you speak, you die. If you keep quiet, you die. So, speak and die.” Djaout’s sentiment plays on what most of us have seen throughout the Black Lives Matter movements — life can end, but what was said before and after it is forever.

Tamir Rice was a 12-year-old boy walking down the sidewalk with a toy gun when he was brutally murdered by the police. An onlooker originally called the police to report someone who was probably a juvenile was wielding a gun, but then stated it probably was not a real one.

Tamir’s mother Samaria Rice says that he was an all-American kid, and writes, “When I lost Tamir, I lost a piece of myself.” No police have been charged on the shooting that occurred November 22, 2014. As a result, neither Tamir nor Samaria Rice have received justice. It’s been 2,164 days.

Antonius Wiriadjaja was 30 years old when he met John D. Morant. Wiriadjaja himself had just been shot in Brooklyn, when Morant, a barber in the area, saw him on the street and applied pressure to keep Wiriadjaja alive. Wiriadjaja writes, “I tried to keep in touch, but, a year after my shooting, John went away to see family and friends in the South. I called him up and got no answer.”

In June 2014, Morant himself was shot to death in the back in a South Carolina trailer park. He left behind a job he loved at his brother’s barbershop in New York.

Eric Garner had been arrested 30 times when he was caught yet again by police. This time in July 2014 was because he had been accused of illegally selling a single cigarette. When Garner resisted arrest, New York City policeman Daniel Pantaleo held Garner’s head down until he died as Garner protested, he was failing to breathe.

The video, filmed by an onlooker, was shown to a jury who voted Pantaleo was innocent later that December. There has been no justice for Eric Garner. It’s been 2,293 days.

Michael Brown was shot in Missouri two days before starting college. It was August 9, 2014 when he and his friend allegedly stole a pack of cigarillos from a convenience store. The pair fled the scene when they were caught up to by police officer Darren Wilson. As they were running, Wilson began shooting. Brown was shot six times — three times in the arm, once in the eye, once in the skull, once in the neck, and once through his chest. A grand jury voted Wilson was innocent. There has yet to be justice served for Michael Brown. It’s been 2,270 days.

Philando Castile was driving through a traffic stop in Falcon Heights, Minnesota in July 2016. Castile was pulled over by Officer Jeronimo Yanez for a brake light that was out. Castile immediately admitted to Yanez that he had a firearm in the car, but Yanez said that he misread the statement as a threat. Yanez turned to get his license out and was shot.

The entire exchange was livestreamed by Castile’s girlfriend on Facebook for ten minutes. Mr. Yanez was fired, but the jury found him not guilty. There has been no justice served for Philando Castile. It’s been 1,573 days.

On March 18, 2018, a yearlong investigation was launched to understand the shooting of an unarmed black man. Stephon Clark, 22, was shot seven times in Sacramento, California in his grandmother’s backyard. Police received word that a man had broken car windows, and while looking for the perpetrator, decided Clark was him.

A year later in March 2019, the investigation concluded that Clark was innocent, not guilty. Even worse, the two police officers that shot him were found not guilty, too. There has still been no justice served for Stephon Clark. It’s been 995 days.

Breonna Taylor died in her own home on March 13, 2020 when she was shot eight times by police. She was in bed around 12:30 a.m. with her boyfriend Kenneth Walker when they heard what they thought was burglars. Policemen Jonathan Mattingly, Brett Hankison, and Myles Cosgrove claim that they knocked on the door several times and announced their presence, but multiple neighbors stated that this was not true.

On September 23, 2020, a grand jury indicted Officer Hankison for wanton endangerment, which basically means he was only guilty for sending a bullet shot through the neighbor’s wall. There has been no justice, however, for the taking of Breonna Taylor. It’s been 235 days.

In a manner that relit the flames of the Black Lives Matter movement, George Floyd was brutally killed after a police officer took a knee on his neck.

On May 25, 2020, Floyd was leaving a convenience store when the cashier believed the 20-dollar bill he used to pay with was counterfeit. The police were contacted, and upon arrival Officer Thomas Lane drew his gun immediately. Floyd was not compliant until he was put in handcuffs, in which case afterwards he did as he was told. He got on the ground, and Officer Derek Chauvin put his knee against Floyd’s neck. A witness began videoing as Floyd stated he couldn’t breathe, and that he was going to die. The eight-minute video has been viewed billions of times. Chauvin was later arrested for second degree murder.

At an Austin, Texas Black Lives Matter protest in May, Justin Howell was standing next to a protestor that threw a water bottle at a crowd of police officers. An officer fired back with beanbag rounds, one hitting Howell in the head. He suffered a fractured skull and brain damage. Howell’s brother Joshua has said that his recovery will be “a marathon, not a sprint”.

Since it is unknown which officer shot, it is rather difficult to know which is responsible. As a result, there is no justice for Justin Howell, who was simply exercising his right to protest. It’s been 156 days.

In a small northern city of San Francisco, an unarmed 22-year-old black man named Sean Monterrosa was shot by a policeman. Monterrosa was protesting outside of a Walgreens when officers responded to a call about looting. Detective Jarrett Tonn assumed Monterrosa was looting, and shot at him through his own truck, not a city-owned police car. Monterrosa went to his knees and raised his hands.

Surveillance footage then suggests Monterrosa was shot. There has been no justice served. The June 2 killing occurred 155 days ago.

Sandra Bland had moved from the suburbs of Chicago to Prairie View, Texas to pursue a job opportunity in the summer of 2015. When she was pulled over by Officer Brian Encinia for a routine traffic violation, he asked her to put out her cigarette. Bland replied, “Why do I have to put out a cigarette when I’m in my own car?” Encinia then commanded her to get out of the car, and following her refusal, he opened the car door, grabbed her, and attempted to pull her out. He then threatened to tase her, so she stepped out.

The two then walk around to the other side of the car. While they cannot be seen on the dash cam footage, a bystander filmed Encinia and a female officer standing over Bland. Bland is on the floor stating she cannot hear and that she is epileptic. Encinia replies, “Good.” Bland is said to have committed suicide in prison three days later, but rumors, as well as an HBO documentary provide context on how Encinia may have killed Bland and made it look like a suicide.

Encinia was later charged for perjury, not for the distress caused to Bland and her family. There has been no justice served for the pain brought to Sandra Bland. It’s been 1,939 days.

Trayvon Martin was an African American teen walking home from the convincing store when he was fatally shot by a neighborhood watch volunteer. George Zimmerman shot the 17-year-old on February 26, 2012. Zimmerman had called a non-emergency line of the Sanford police, which advised him not to follow Martin. He did not listen and shot the boy. Martin had been visiting his father, made a trip to buy Skittles and a bottle of juice, and was murdered. Zimmerman was prosecuted for second-degree murder on April 11, 2012.

In April of 2015, Baltimore saw the death of Freddie Carlos Gray Jr. Gray was arrested in the Gilmore Homes Housing Authority by three police officers on bike patrol. An hour later, a medic was called due to Gray being unconscious and not breathing. A week later, on April 19, Gray passed away due to a cervical spine injury.

Deputy Commissioner Jerry Rodriguez stated a week later, “We have no evidence, physical or video or statements, of any use of force.” Protests began on May 1, 2015. Two years later in court, the officers were found not guilty over the mysterious death of Freddie Gray. There has been no justice served for him. It’s been 2,026 days.

On November 20, 2014, Akan Gurley was walking down the stairwell of his apartment complex with his girlfriend in Brooklyn when he was shot. NYPD officer Peter Liang was a rookie policeman when he was patrolling the area and was startled by Gurley walking down the stairs. Prosecutors stated that Liang was reckless and did little to help the dying victim. Liang was subsequently fired and convicted of second-degree manslaughter and official misconduct.

The names mentioned here are only the tip of the iceberg. There are so many others who have lost their lives to gun violence and police brutality. It is up to us to take care of the next generation by electing officials that will ensure police brutality and gun violence is closer to ending. Every bit of change starts with us, the American people, and we must show up for each other and stick up for one another.