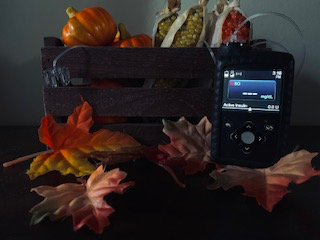 As November rolls around, it brings with it lots of opportunity to celebrate and reflect. I am thankful for November, not only because it is my birthday month, but because it is Diabetes Awareness Month. Due to those who choose to educate, advocate, and search for a cure, I am here today, and I am thankful.

When I was five, my parents had noticed I was behaving unlike myself. My mother, who is a nurse noticed I was showing common symptoms of someone who has diabetes. Some of those being, constant bathroom breaks, being thirsty, short tempered, and feeling sick. Two weeks before my sixth birthday, I was officially diagnosed with Type 1 Diabetes (T1D).

What is diabetes you may ask?

Well, there are a few different types of diabetes: Gestational Diabetes, Type 2 Diabetes, and Type 1 Diabetes, which is what I have.

According to the Centers for Disease Control and Prevention (CDC) T1D is, “[when the] pancreas doesn’t make insulin or makes very little insulin. Insulin is a hormone that helps blood sugar enter the cells in your body where it can be used for energy. Without insulin, blood sugar can’t get into cells and builds up in the bloodstream. High blood sugar is damaging to the body and causes many of the symptoms and complications of diabetes,” This is why it is important to take this disease seriously; it can be life threatening if not managed properly, something I know quite personally.

Previously, T1D was called “juvenile diabetes” because of how often it was found in children. But, as medical science advanced, it came to be recognized as not just a disease for kiddos. So, while I was diagnosed with T1D as a child, technically anyone at any age can be diagnosed with it and have it.  According to the CDC, “Type 1 diabetes (previously called insulin-dependent or juvenile diabetes) is usually diagnosed in children, teens, and young adults, but it can develop at any age.”

The CDC also notes, “Type 1 diabetes is thought to be caused by an autoimmune reaction (the body attacks itself by mistake) that destroys the cells in the pancreas that make insulin, called beta cells. This process can go on for months or years before any symptoms appear. Some people have certain genes (traits passed on from parent to child) that make them more likely to develop type 1 diabetes, though many won’t go on to have type 1 diabetes even if they have the genes. Being exposed to a trigger in the environment, such as a virus, is also thought to play a part in developing type 1 diabetes,”

While any person at any age can be diagnosed with T1D, I feel it is important to acknowledge that it is not a contagious disease. While T1D is caused by autoimmune reactions and genetics can play a slight role, there is still no definite reason as to why some people get T1D and others don’t. I cannot give anyone diabetes; it cannot be passed around like the flu or mono.

The CDC also emphasizes that diet and lifestyle habits do not cause T1D, which completely busts the myth that diabetics can’t have anything sugary. For instance, I love chocolate and I’m diabetic. Diabetes, while having no cure is still a manageable disease.

In hopes of finding a cure, many organizations like the nonprofit founded by Carol Lurie and Lee Ducat, JDRF, the Juvenile Diabetes Research Foundation, host walks around the nation in hopes of raising funds that go towards research and helping Type 1 Diabetics. JDRF has raised awareness and funds for research for many years since 1970. One thing they have helped accomplish would be the evolution of the insulin pump. The insulin pump which usually fits in the palm of your hand, used to be so big it was worn as a backpack!

When I was younger, I was a part of a walk hosted by JDRF. My group, consisted of many family members as well as close friends, who wore matching t-shirts and we were called “Hannah’s Hope”. Even at a young age I understood the importance of this walk. However, I was taken aback by the support and immense feeling of care I experienced during this event. So many gathered in order to bond together to support T1D creating a surreal atmosphere. I knew people cared, but I had never seen so many in one place at the same time. We marched downtown Des Moines through all of the skywalks as a united front, with strangers’ hands joined together as one. It is a feeling I will never forget.

So, why does November matter?

One reason I believe T1D is so misconstrued, is because it is not talked about enough. As a diabetic I am frequently questioned as to whether I can eat or drink certain things. Sure, the questions about what I can, or cannot eat/drink get more than annoying, but I do understand why those questions are asked. For people who do not understand my disease, it’s not their fault. They are simply unaware because they have not been educated, and that is okay.

Education is the most important thing when it comes to this. Awareness of Type 1 Diabetes is something that is barely taught in schools or talked about in general, this is why so many stereotypes and myths surround this disease.

November is all about promoting awareness, advocacy, and education. As well as changing how the public and mass majority of people view diabetes. November is immensely important to me because I am a Type 1 Diabetic. November should be important to everyone because there are over 32.4 million Americans who have diabetes. This means that this disease could be affecting your peers, friends, co-workers and family. Currently no one knows how to prevent or cure Type 1 Diabetes. So, this month I challenge you to become aware, educated and to advocate for diabetes. Here’s to November!

For more information about Type 1 Diabetes check out this link below: