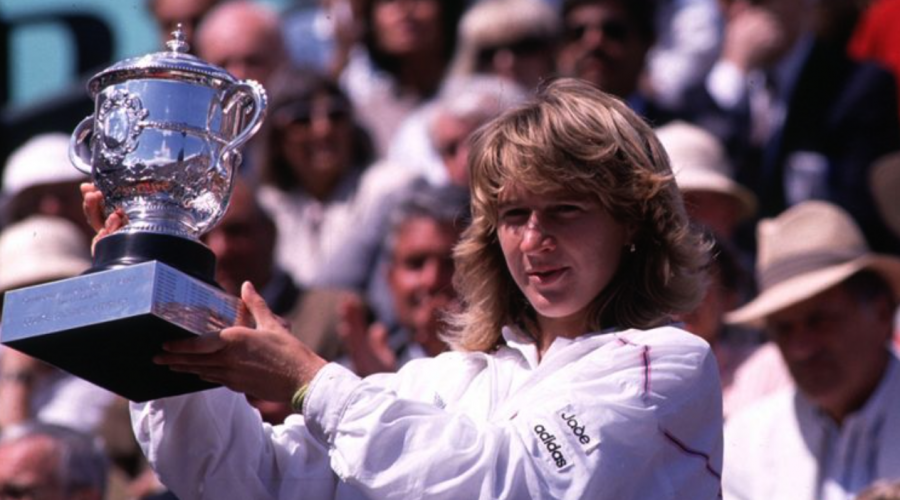 As I’m sure you all remember, in the Spring of 2020 we had a period where no live sports were being played and we had to somehow make do without. I spent a lot of time re-watching documentaries, full games, and full matches from the past featuring some of my favorite teams and athletes. This included watching every match of Steffi Graf’s 1988 “Golden Slam,” which saw her crowned the victorious champion of all four Grand Slam tournaments: the Australian Open, French Open, Wimbledon, and the U.S. Open. With the final ATP (Association of Tennis Professionals) tournament of 2020 scheduled to be played this month, I thought it would be fitting to bring this up.

In 1988, Steffi became only the seventh tennis player (amongst both male and female players) to achieve this. Not only did “Fräulein Forehand” (as she was nicknamed by the press) dominate the four Grand Slams at the young age of 19, she also took the Olympic gold medal for West-Germany in the Seoul ’88 Olympic Games. No player, male or female, has accomplished this goal since.

Graf faced the likes of Hall of Fame players such as, Gabriella Sabatini, who was vanquished in the finals of Graf’s quest for the U.S. Open trophy and an Olympic gold medal. She also defeated another legend in Chris Evert, whom Graf defeated in straight sets in the Australian Open final by a score of 6-1, 7-6. Despite facing such elite talent, Graf’s opponents managed to win a total of two sets against her. Two! One of which came at the 1988 Wimbledon final against the seven-time tournament champion and the red-hot favorite to win her eighth in

1988, Marina Navratilova. Navratilova, who the WTA ranks as the player with “the third fastest serve in the history of Women’s tennis,” looked to be too powerful, too experienced for young Steffi, who was overpowered in a close first set by a score of: 7-5. A crucial moment in Graf’s career, she proved to be unphased by the pressure. She completely outclassed the seven-time champion, using her rapid speed, and lightning-quick agility to reach return shots that would have been guaranteed winners against most. She of course hit countless of her infamous, deadly forehands at angles that inspired the “Fräulein Forehand” nickname of the German superstar. NBC commentator, Dick Enberg, described Graf’s style of play as “genius.” Graf won the second and third set: 6-2, and 6-1. If there was any doubt before, there was none after that match. Graf was the best in the game. That day in London, a changing of the guard took place, and I don’t mean outside Buckingham palace.

Graf’s ’88 Golden Slam is the tennis equivalent of the 1972 Miami Dolphins undefeated 17-0 season. Or the 1999 Manchester United treble-winning team. For the lack of a better word, Graf’s 1988 season was… perfect. Her Golden Slam solidified her status as the greatest female tennis player of all time. Until anybody can rival her perfect season, that is a status she will always have.

How about Serena? Is she good enough to equal Graf’s ’88 season?

In 2020, despite there not being an obvious favorite, other than herself, Williams couldn’t capitalize. She hasn’t been able to do so since the Australian open of January 2017, when she beat *yawn* her sister, Venus, in straight sets. What a surprise! It’s not like any of their previous meetings have been one-sided straight-set matches before. This match was almost four years ago. Serena hasn’t achieved much since then. So, as much as it may disappoint the Williams fans, I am confident in saying that her window of opportunity to match Graf’s ’88 season is very close to closing.

Make no mistake about it, I think Serena William’s style of play is boring, and I don’t think it would have been as effective in the ’80s and early ’90s. However, I can’t argue that it has been effective during her era. Williams has won 23 Grand Slam titles, the most of the open era. She has also easily been the most feared player in the Women’s game for the two most recent decades. But despite her dominance, she has still failed to take all four major trophies in the same calendar year. Which isn’t anything to be ashamed of. It is incredibly difficult to be victorious on grass, clay, and hard-court surfaces in such a short period of time. This strongly supports the claim that Steffi Graf is the greatest of all time.

Even if Serena doesn’t complete the Golden Slam, can she be considered the greatest of all time? It would be hypocritical of me if I told you that you can-not consider somebody to be the “G.O.A.T.” after my article regarding LeBron James and Michael Jordan. So, if you really believe that Williams is the best to ever play and you aren’t being influenced by recency bias, then, by all means, place her above Graf. However, I think you must make a legitimate case as to why you think that. Unlike the LeBron vs M.J. debate, I have yet to come across an argument in Williams’s favor that is respectable in my opinion.

Williams has never been in the same class as Graf when it comes to comparing the two as players. Williams has always lacked the quickness, agility, and skill that Steffi Graf had, which made women’s tennis a joy to watch. Instead, she favors the strategy of overpowering her opponent.

Williams has also greatly benefitted from a lack of competition. Seriously, who has been her biggest rival? Her sister? Even though their father allegedly fixes the outcome of their matches. As far-fetched as this conspiracy may be, their matches are usually one-sided and boring, making it difficult for me to respect Venus as a rival. Who else? Maria Sharapova maybe? She’s hardly the brutal obstacle of Chris Evert, Martina Navratilova, Gabriela Sabatini, and Monica Seles that Steffi had to overcome to win her 107 career titles and 22 Grand Slams.

You might be thinking something along the lines of “But Stefan, you said Williams has won 23 Grand Slams, that’s more than 22!” In my opinion, it doesn’t matter, because as I previously mentioned, Williams never had to overcome consistently elite competition. Williams also began her ongoing career in October 1995, twenty-five years and counting. Graf, on the other hand, played between 1982 and 1999. In her additional eight years as a professional, Williams has only managed to surpass Graf’s Grand Slam total by one. What? Only one? In an era that she effectively has a monopoly in? The “23 Grand Slam titles” argument is laughable.

It is especially laughable when you compare the two player’s stats and achievements in other areas, because believe it or not, there are more achievements than Grand Slam victories. The resumes of the two make it clear which player is the most accomplished:

I hope you all enjoyed reading this one and learned something about the history of Tennis. Steffi Graf’s “Golden Slam” of 1988 is still the greatest single-season achievement in the history of tennis. It should also be considered as one of the greatest achievements in all of sports. If any player in the women’s game was going to equal the “Golden Slam” it would have been Serena, granted she still has a chance, but she is clearly past her prime, making it highly unlikely. If by some miracle she does, the level of competition is hardly going to be as fierce as Graf’s. When it comes to Tennis, Steffi Graf is royalty. She is the one and only Queen of tennis. Serena on the other hand? Well if Steffi is the Queen, then by comparison, Serena is the jester.