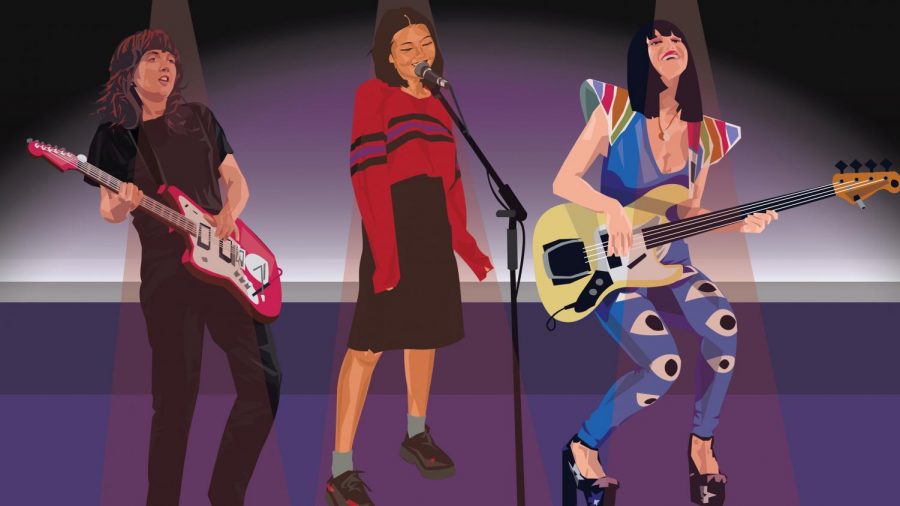 For decades we’ve seen female superstars in pop and country take the world by storm as they push music forward. More recently, hip-hop has found a plethora of women that dominate the Billboard charts and sell out shows all over the globe. This incredible explosion has given the world a number of female MCs that are now household names. But in all the firepower and progress of today’s music, where has rock gone?

Sure, we’re all familiar with the underwhelming Zeppelin wannabes, Greta Van Fleet, and the painfully unoriginal sound of The Struts, but they seem to be the only names in rock that people recognize these days. Where are the legendary ladies of rock like Stevie Nicks and Grace Slick? I promise you, hip-hop is hardly the only genre to find women worthy of the history books. The astounding sound of these three stars are set to bring Rock and Roll back to former glory.

20 or so years from now, when she’s inducted into the Rock and Roll Hall of Fame, Courtney Barnett will be regarded as one of the greatest songwriters the world has ever seen. This may upset some of you, but she will rival names like Bob Dylan and Paul Simon. Hailing from Sydney, Australia, Barnett possesses a lyrical wit that is as unique as it is creative. “I get adrenaline, straight to the heart. I feel like Uma Thurman, post-overdosing kick start” echoes as an unforgettable line among many in “Avant Gardener.” As she pieces lyrics together, the astounding Aussie shows off this incredible knack for putting words to things every person feels or has felt at some point, like the infectious chorus in, “Nobody Really Cares If You Don’t Go to the Party” that’ll have almost any college student singing like they wrote it.

A common trait among songwriters of this grandeur is the refusal to shy away from topics deemed “controversial” by their timid counterparts. Courtney Barnett does just that in tracks like, “Nameless, Faceless” and, “Pedestrian at Best” as she pours on the uneasy truths of being a woman in today’s world.

Every ounce of emotion felt in Barnett’s lyrics are seamlessly complimented by her profound abilities as a guitarist. Any given track is guaranteed to feature some of the most well-written lyrics and artful execution of the six strings, a signature combination that earned her a Grammy nod for Best New Artist in 2015 (won by Meghan Trainor, tragically). There is no doubt in my mind that others share my impatience for the next full-length project from this future legend.

Other tracks from Barnett that can’t be missed:

“An Illustration of Loneliness (Sleepless in New York)”

“Crippling Self-Doubt and a General Lack of Confidence”

Take everything great about rock in the late 90s and early 2000s, make it even better, and you’ll have a better feel for the music of Beabadoobee. Tracks such as, “I Wish That I Was Stephen Malkmus” and, “Care” feel like a flashback to the turn of the century. Her angelic voice fits perfectly with each melodic variation she takes on the guitar. The Filipino-born, British raised artist is only 20 years old and is already well on her way to superstardom.  She is receiving high praise from Jaden Smith, Roy Blair, and the 1975’s Matty Healy. Her quick rise to fame started after her first original song, “Coffee,” found viral success on social media. The success of her first three albums, Patched Up (2018), Loveworm (2019) and Fake It Flowers (2020) proves that the young musician is here to stay in today’s rapidly moving music scene.

Other tracks from Beabadoobee that can’t be missed:

If fate were to ever bless me by being in the presence of Laura Lee, I would only hope she doesn’t find out that I’ve somewhat put her and the rest of Khruangbin into the restrictions of a single genre in this article. The full-time bassist and part time lead singer is usually found dancing on stage in an outfit that will end up in a Hard Rock Casino someday. Lee and her Houston-based trio make up an immensely talented, three-headed monster that is allergic to the word “genre.” It is one thing for an artist to be as captivating as Laura Lee when taking on lead vocals but doing so in multiple languages is what makes her a one-of-a-kind artist today. Despite English being her first language, the Texas-born bassist triumphantly sings in French on, “Connaissais de Face,” and continues to be in her element on the Spanish vocals, such as, “Pelota” (Both from Mordechai).

Perhaps the most criminally underrated album from the summer of COVID-19 was Khruangbin’s Mordechai. Prior to its release in late June, the trio was mostly known for using vocals sparingly in full length projects. However, Laura Lee shined in a vocal role on the album, most memorably on, “Dearest Allfred” and, “Time (You and I).” We can all hope the masterpiece that is Mordechai, and the critical success it received, will result in them giving us more of Laura Lee’s lead vocals. This is not the last we will hear from Laura Lee and Khruangbin, and I expect it is not the best we’ll hear either.

Other tracks by Khruangbin that can’t be missed:

If by chance you haven’t heard of these three women before today, do yourself a favor -grab a chair and some headphones and bask in the musical artistry of these relative newcomers.  You can thank me later.