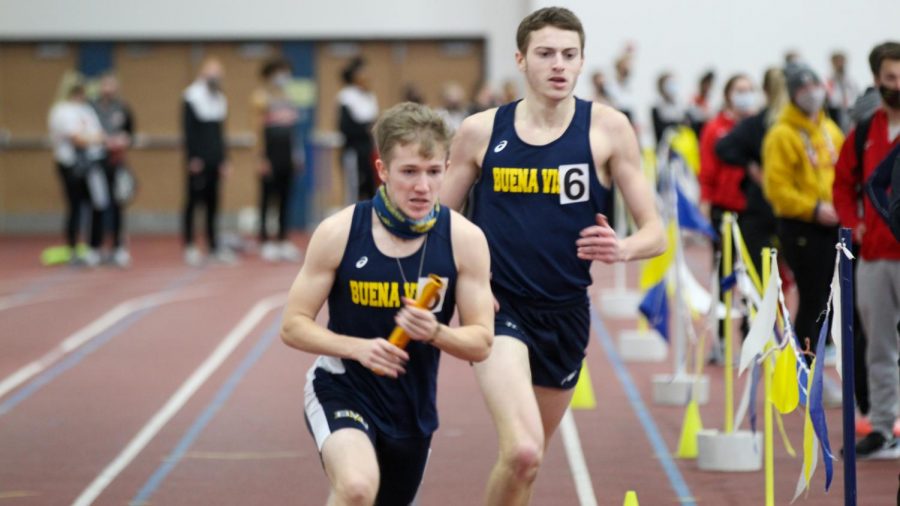 *Correction: This article has been updated from its previous version. The Tack Online seeks to report accurately with the latest information.

COVID-19 was supposed to be the biggest problem Buena Vista’s Athletic teams would face this season. After postponements and cancellations, they had hoped most things would run smoothly in the spring. However, BV’s track & field team would face one more hurdle as now-former head coach Colt Slack would resign to pursue a new coaching job midway through winter break, prior to this season. A surprise to some but understood by others, this left the track and field team in a daze coming into their spring indoor season. This left the roles of the head coach position to fall to two of the assistant track and field coaches, Chris Orlow and Jonina Brinson.

“Obviously, it’s going to hit any coach kind of hard losing a head coach. Being assistants though, I think we took the challenge and tweaked some changes and made this program our own,” said now-interim head coach Chris Orlow.

Some of the changes Orlow mentions, includes taking the group of athletes Colt Slack was in charge of and splitting them, and the responsibilities that come with coaching for their events, between the two interim head coaches. For example, Orlow would now coach the 800-meter runners and Coach Jonina Brinson would take the 400-meter runners.

One of the worst things that can happen when losing a head coach is losing athletes and having athletes losing trust in the program. This was a concern for the new coaches but one they faced with optimism.

Brinson would touch a little on this positive outlook, “They kind of built trust in us from the fall and what we were working with because we did establish good relationships and a good presence, so it was an easier transition than expected.”

While this seems like great optimism, it may not have been completely well placed. Sophomore runner, Jadyn Forbes, saw a different side to the story. “If we’re being honest, not a lot of people are handling it well. We’ve had about 10 people quit. I know a lot of people are still on edge about whether or not they want to keep going with it.”

Other athletes also expressed their worry and optimism with the transition as well. “I feel the transition was hit or miss with some people. We lost a coach that brought most, if not all of us to campus…[the move] has been rough but most people are plowing through it like no other…we are gaining trust and slowly learning each other’s ways,” says sophomore runner Ashley Tennyson. She added she was optimistic about the achievements the team would earn by the end of the season.

The Women’s team captain, senior Kylie Johnston, and sophomore pole vaulter Joseph Fisher both expressed their optimism in the team. “Through trial and error and heavy work on communication, I feel that our team is adjusting well to the situation,” says Fisher as Johnston mirrors the optimism saying, “Coach Brinson, Coach Orlow, and Coach Maier are all doing an amazing job with what cards that they have been dealt.”

The search for a new head coach is already underway and is hoping to be completed by the end of the spring semester. Forbes has expresses her optimism in the search for their new head coach,“I’ve heard great things about the potential head coaches that are up for grabs for, hopefully, becoming our coach for maybe even our outdoor season if we’re lucky.”

So far this season, neither Buena Vista’s men’s nor women’s track & field teams have had a top place finish in the last two home triangulars they have hosted. The best finish either team had was the women’s team who placed second in the triangular. The teams compete again on February 20th, in Dubuque against the University of Dubuque and Coe College.