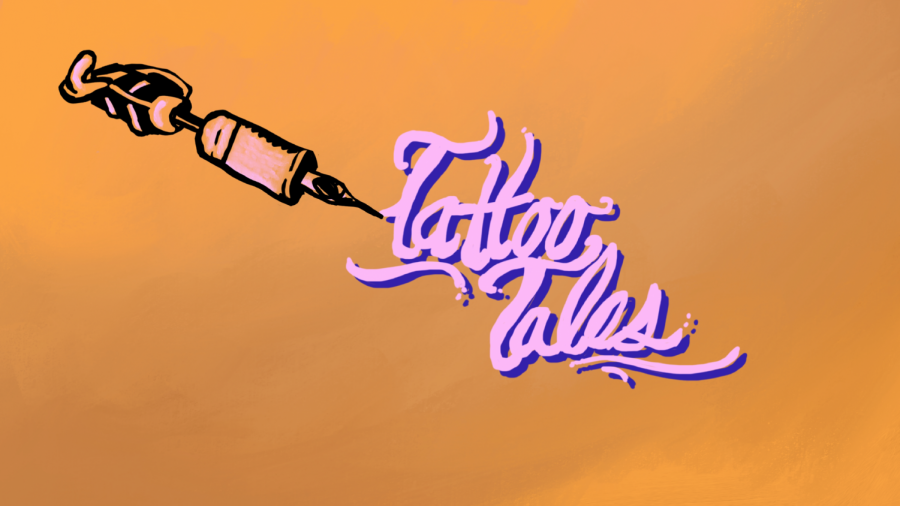 “Tattoo Tales” is an ongoing series that features BVU students’ tattoos and the stories behind them.

In senior Zach Hess’s family, there is no stigma attached to having tattoos—they are simply another way of expressing art. Although surrounded by family members and friends who were permanently inked, he did not always plan on getting tattoos. It wasn’t until his last two years in high school that he realized how much he liked the art form.

“In a sociology class we learned about the meaning of tattoos, what they can mean to us, and how the placement is important to us sociologically and psychologically,” Hess said. “Where you put it matters.”

Hess has four tattoos. He got his first one when he was 19 years old at Alley Cat Tattoo in Storm Lake as part of a Friday the 13th flash sale. Placed on the right side of his chest, it is an outline of a cat’s head with the number 13 within it. He recalls that it was quick and easy due to it being the size of a dime.

A few months later, Hess decided to visit the tattoo shop once again, this time in Des Moines at the Des Moines Tattoo Collective. Working with artist Carrie Black, he provided her with a drawing that would serve as the inspiration for one of his most meaningful tattoos, which is placed on his right wrist. The design consists of a divided equilateral triangle with a heart, smaller triangle, and circles in the four sections. 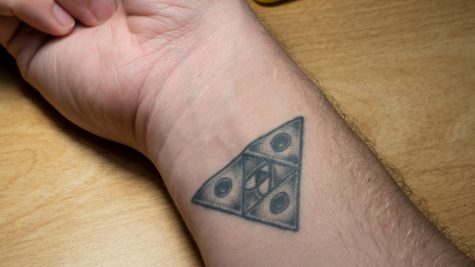 “I drew this design on everything in high school,” Hess said. “The meaning is that each outer triangle represents the people from my past, present, and future. The heart in the center is my heart.”

Hess acquired his third tattoo at The Black Hat Tattoo in Dublin, Ireland, while on a school trip. Before meeting with artist Mael Besnard, he was inspired by a poem by WB Yeats titled “The Moods.” It was the basis for the exploding stopwatch on the left side of his chest. Hess remembers the tattoo being painful and reasons that it was due to it being in color, taking three hours to complete, and the work ethic of the artist. 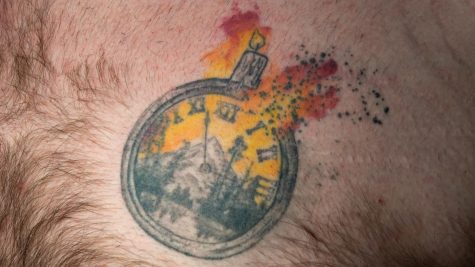 “Mael was sort of a perfectionist,” Hess said. “He kept going, then stopping, and saying ‘not perfect yet’ while drawing another line on my chest.”

Hess has been consistently tattooed every year, starting from 2018 to 2020. His most recent permanent addition was created by Ace Wilde at Yankee Doodle Dandy Tattoo in Des Moines. An image of a poodle in the art style of Wes Anderson’s Isle of Dogs adorns his left inner bicep. It serves as a memorial to his dog, Curly, that passed away in August 2020. 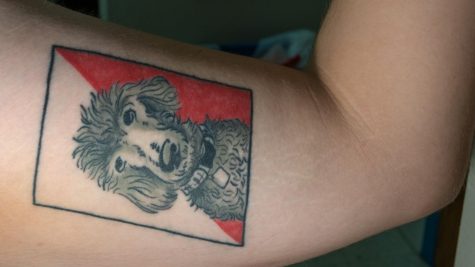 “I’ve been wanting to get this for a few years now,” Hess said. “It’s a pretty spot-on depiction of Curly.”

Despite not having placed any deposits on new tattoos, Hess has plenty of ideas for future artwork. He is planning to eventually get more tattoos on his back, shoulder blades, calves, and forearm.