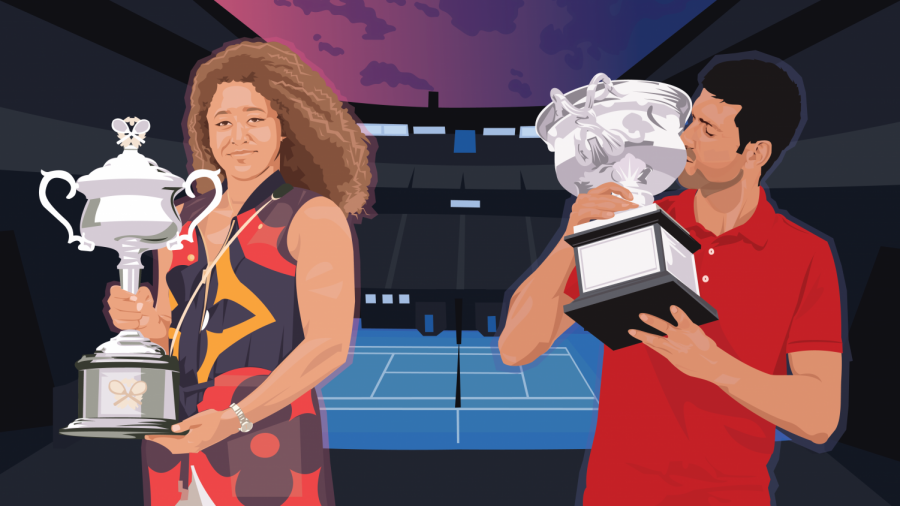 The first Grand-Slam of the tennis season is in the books. For the past two weeks, I’ve been in the Australian time-zone, staying up until the early hours of the morning to see how the tournament unfolded. I wasn’t disappointed. It seems like an eternity since I watched a live Grand Slam tournament with fans in the audience. They made all the difference in the world, creating an electric atmosphere. Unfortunately, there was a five-day period in the second week that saw the government impose a “snap lockdown” to combat COVID cases. But nonetheless, it was an exciting tournament that had two deserving champions: Naomi Osaka and Novak Djokovic.

Japan’s Naomi Osaka came into this tournament as an established hard-court player. Osaka already had one Australian Open title under her belt. She is also the reigning U.S. Open champion, a tournament which she has won twice.

Osaka’s road to her fourth Grand Slam championship didn’t seem to be a huge challenge for her. Osaka comfortably won six out of seven matches in straight sets with the only player in the tournament to win a set against her being Spain’s Garbiñe Muguruza. Muguruza was the only player at the tournament to give Osaka any trouble whatsoever, taking the first set, and losing the second and third by a score of (6-4, 4-6, 5-7.)

The only match of the tournament that Osaka entered without being the undisputed favorite to win, was the Semi-Final versus, Serena Williams. I coined this match as the real final because it was highly unlikely that either the USA’s Jenifer Brady or the Czech Republic’s Karolina Muchova, would be able to outclass the Japanese superstar and defend her consistently powerful, pin-point accurate groundstrokes. Or if Williams was to reach the final, it was unlikely that Brady or Muchova would be able to beat her.

The Semi-Final between Osaka and Williams was a rematch of the 2018 U.S. Open final, which was the most memorable women’s tennis match in recent memory. Only it wasn’t memorable due to the display of tennis. It was memorable because Williams was (rightfully) accused of cheating by receiving hand signals from her coach, putting her at an unfair advantage. According to Alex Nathan of Bleacher report, “[Her coach] Patrick Mouratoglou, disclosed he was coaching from the players’ box,” which is against the rules. The umpire saw that Williams was receiving hand signals from Mouratoglou and removed a point from her. Williams threw a huge tantrum and acted like a spoilt little brat, hauling verbal abuse at the umpire. Williams later attempted to have the umpire fired, claiming that she “did not cheat” and would “rather lose than cheat.” Her coach confirmed that that was a lie. Osaka won this match and claimed her first Grand Slam title. But the spotlight was taken away from Osaka on what should have been one of the happiest days of her life. This is because all the media wanted to talk about was how Williams was cheated by the (according to Williams) “sexist umpire,” even though Osaka is also a woman, so that claim doesn’t make sense. As you can imagine, I was in Osaka’s corner in their 2021 Australian Open meeting because she deserved to have an opportunity to beat Williams again, not only to prove once and for all that she is a better player but to be compensated for the lack of media attention that she received from beating Williams in the 2018 U.S. Open final.

Osaka did-not disappoint. After looking shaky early on, finding herself down two games to love, Osaka outclassed the 23-time grand slam champion and won by a score of (6-3, 6-4.) Her outstanding top-spin forehands, hit with precision accuracy into the corners of the court, forced Williams to run from tramline to tramline. Osaka’s strength and power enabled her to control most of the points and take Williams out of her comfort zone. For William’s entire career, she has struggled when she has not been able to overpower her opposition. Osaka has proven on multiple occasions that on the hard-court service, she is more than capable of counterattacking Williams’s favored strategy.

In the final, it came as no surprise that Osaka beat Jenifer Brady, who in all fairness had a great tournament and managed to overcome the odds by reaching the final despite being ranked as the 22nd seed. Although Brady deserves a 10/10 for effort, she simply wasn’t good enough to beat the more talented Osaka. Brady had nothing but high praise for Osaka in her speech as she accepted the second-place trophy, saying:
“Naomi is an inspiration to us all and what she is doing for the game is amazing… I hope young girls at home are watching this and are inspired by what she’s doing.”
Well said Jenny, Osaka is an inspiration. She is by far the best Female Tennis player I have seen since Justine Henin in her prime. I hope her performance inspires future generations of female athletes.

Future expectations are high for Osaka. Mats Wilander, winner of seven Grand Slam tournaments and current Eurosport pundit stated that Osaka can win “at least 10 Grand Slam titles.” It’ll be interesting to see if Osaka’s dominance on hard-court can translate to the clay-courts of the French Open or the grass-courts of Wimbledon. So far in her career that has not been the case. However, if that changes and Osaka is able to play equally as well on other surfaces, then I don’t see anybody standing in her way of becoming the first player to win a calendar Grand Slam since the “Queen of tennis”, Steffi Graf, won it in 1988. Obviously, I am a big fan of Steffi. But I have no problem with a player as talented and humble as Osaka equaling Graf’s “Golden Slam” season should it come to it.

Meanwhile, on the Men’s side, Serbia’s Novak Djokovic came into this tournament looking to claim his third consecutive Australian Open title and his ninth overall. Djokovic is the most dominant player in the history of the tournament, so it came as no surprise that he was the favorite to win it again. I originally predicted that the final would take place between Djokovic and his long-time Spanish rival, Rafael Nadal.

As the tournament progressed, I saw no reason to believe that my prediction wouldn’t become a reality. In fact, I was convinced that Nadal would beat Djokovic, should they meet in the final. Nadal was in a groove, using the tennis IQ that the 34-year-old had built up over his 20 years as a professional, whilst also playing with the athleticism of a 24-year-old. Whilst Nadal was winning comfortably, Djokovic was struggling due to back pains.

Djokovic’s most surprising match came in the third round when he beat the 27th seeded Taylor Fitz in five sets. His back seemed to be bothering him, as he was unable to reach shots that under normal circumstances would be routine for Djokovic to return. He persevered, however, beating Fitz by a score of (7-6, 6-4, 3-6, 4-6, 6-2.) After beating Fitz, Djokovic’s back no longer seemed to be a problem, as he only failed to win two sets for the rest of the tournament.

The Nadal vs Djokovic final, unfortunately, never took place. Nadal played against Stefanos Tsitsipas in the quarterfinal where Nadal led two sets to love. With the third set tied by a score of 6-6, Nadal had a fantastic chance to win the match in straight sets and progress to the Semi-Final. But Tsitsipas made a miraculously, unexpected comeback. He took the momentum from winning the third set tiebreak by a score of 7-4 and never looked back, winning by a final score of (3-6, 6-2, 7-6, 6-4, 7-5.) Tsitsipas did not carry the momentum with him to the semi-final, which paved the way for Djokovic to win his ninth Australian open.

Djokovic played against the number four seeded Daniil Medvedev from Russia in the final. Medvedev is a talented player and I have no doubt that he will eventually win a Grand Slam tournament. But it wasn’t meant to be this February. After a close first set, which finished 7-5, Djokovic entered the driving seat for the remainder of the match. Djokovic managed to break Medvedev’s serve on seven separate occasions, which history has shown, is a key indicator for who will be the victor. The only way that Medvedev would stand a chance against the more experienced, stronger, Novak Djokovic, would be if Djokovic’s back started to affect how efficiently he played and affect his range of movement. That certainly was not the case. Djokovic won by a score of (7-5, 6-2, 6-2.) I offer a huge congratulations to Novak Djokovic, who topped his record of Australian Open titles to nine on February 20th, it was well deserved.