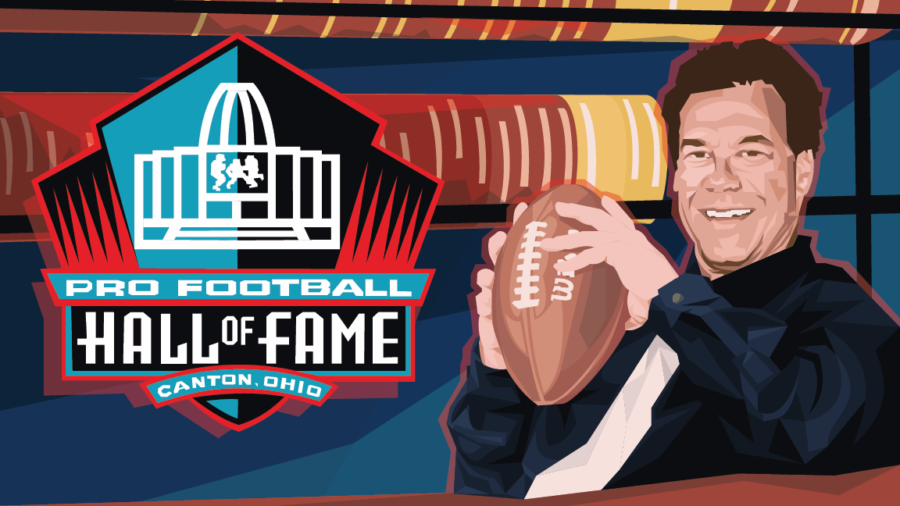 Earlier this year, the Pro-Football Hall of Fame class of 2021 was officially announced. A member of the NFL can receive no greater honor than to be inducted into the Pro-Football Hall of Fame in Canton, Ohio, to become immortalized in the sport’s history. The 2021 ceremony will be bigger than ever before because not only will the class of 2021, featuring the likes of Peyton Manning, Calvin Johnson, Charles Woodson, and Drew Pearson be inducted. But the class of 2020, featuring Jimmy Johnson, Bill Cowher, Cliff Harris, and Troy Polamalu, will be too; since last year’s ceremony was postponed due to COVID-19.

The players and coaches mentioned have given me, and many fans, unforgettable memories. But I wouldn’t have some of those memories if it wasn’t for one particular member of the class of 2020 that will be enshrined in August.

One Christmas when I was eight years old, I unwrapped a gift that, unknown to me at the time, would be one of the most influential presents I would ever receive. A DVD boxset titled “NFL Films: Super Bowl collector’s set.”

Since that Christmas Day, I have watched those DVDs and many other NFL Films productions countless times. Before every Super Bowl DVD, was an NFL Films video titled: “Road to the Super Bowl,” which told the story of the season. “Road to the Super Bowl” was my first introduction to the most unique filmmaking in sports history. Every NFL Films production (prior his death in 1984) featured the voice of John Facenda, who turned a story about football into poetry. Poetry that was so chilling that if William Shakespeare himself were to listen, it would send shivers down his spine. Each production featured an incredible score, orchestrated by the brilliant Sam Spence, who applied the perfect music to each situation. Music which would become synonymous with some of the most memorable moments in the history of sport. Music, which would play in the background whilst the original radio commentary of games was brought to life by some of the most colorful and detailed sports action ever captured on camera. Footage that would stare deep into the soul of the players and coaches of the game, whilst capturing the ecstasy of the fans in the stadium as their heroes on the field were victorious; or the heartbreak as they were vanquished.

As important as Facenda and Spence were, NFL Films was a product of two men behind the camera who ensured that the final product would be as glamorously detailed as possible. The men that wrote the scripts, produced the pictures, and most importantly, founded NFL Films. A Father and Son partnership between Ed Sabol, from the Hall of fame class of 2011, and his son, member of the Hall of Fame class of 2020, Steve Sabol. Ed Sabol founded the company in 1962, when he filmed the NFL championship game between Green Bay Packers and the New York Giants at Yankee Stadium. According to “A football life – Steve Sabol” Ed called Steve when he was at college at Colorado State, and said “I can tell by your grades that all you’ve been doing at school is playing football and going to the movies. Well, it just so happens that I have the perfect job for you.” Steve went to New York to help his Father film the 1962 Championship Game, and NFL Films was born.

Most productions would feature Sabol, a man in a tailored suit and tie, with thick dark hair, surrounded by thousands of film reels that he, and his staff, had captured. In each video, Sabol would look directly into the camera and say, “Hi I’m Steve Sabol,” Then proceeded to tell the audience stories about the history of the game that he loved so much. Stories that would have the audience on the edge of their seats as if they were viewing a Hollywood picture. I specifically mention Hollywood because that is where Sabol’s inspiration came from.

According to Sabol, his inspiration was: “As a kid seeing Duel in the Sun (1946) with Jennifer Jones climbing up a mountain. There was this [intense] music and you could see her bloody hands as she desperately tried to climb up the mountain. I remember thinking ‘why can’t we do that with Football? Why don’t we shoot a telephoto lens and show Dick Buttkus’s [taped] hands or show the line of scrimmage with the hands twitching [pre-snap]’ there’s a whole story there.” (A Football life)

Sabol and NFL Films have captured moments of Pro-Football that will live on forever. When people think of “The Catch” they more than likely think of the footage taken from the camera in the back of the endzone at Candlestick Park. Footage which see’s Joe Montana roll out to his right, pump fake and sling the ball to the back of the endzone, where Dwight Clark vertically leaped up as high as he could, extended his arms, and snagged the ball out of the air with his fingertips for the winning touchdown, sparking the dynasty of Bill Walsh’s 49ers of the 80’s. The footage from the back of the endzone is the product of Steve Sabol and NFL Films via telephoto lens.

The silhouette of the man in the fedora, Tom Landry, and his shadow cast by the sunlight shining through the hole in the roof at Texas Stadium.

Vince Lombardi being carried off the field by his players with a delightful smile on his face as his Green Bay Packers claimed the 1967 NFL Championship title after winning the “Ice Bowl,” the coldest game in NFL History.

Lynn Swann’s “Levitating leap” diving circus catch in Super Bowl X, captured from the cameras in the stands and the sidelines.

The slow-motion video of Earl Campbell lowering his helmet and delivering a brutal hit to a Rams defender, knocking him flying. Leaving the rest of the Rams defense trying so desperately to tackle him that they physically torn his jersey in half and ripped it off his shoulder pads during the play.

John Elway’s eyes locking with Mark Jackson’s before rifling a 5-yard touchdown pass to him on a slant pattern. Capping off “The Drive” in the 1986 AFC Championship game.

Michael Irvin’s Touchdown reception in Super Bowl XXVII, where he broke out of a corner pattern too early, jumped up, swung his right leg out to shield the defender away from the ball, came down with the pass and dove into the endzone, setting the tone of the Cowboys dynasty of the 90’s. Captured from an NFL Films endzone camera

All cutesy of Steve Sabol and his crew, and the first images most people think of when those moments are mentioned.

Sabol captured this footage by having three main camera focuses. A “top” cameraman that would sit high in the stands, and record action from afar known as “the tree.” An Action cameraman that would record the action from the sidelines. Finally, the camera that Sabol operated, the “Weasel,” would record the small but significant details that tell the story. Footprints in the mud, the deep breaths that could be seen from the players on a cold winter day, the shadows casted caused by the rays of sunlight shining through the stadium, and the reactions of the crowd. The result when the footage was combined, was not only art. But history brought to life. Ensuring that fans of the game can feel as though they are experiencing it firsthand.

In 2012, Steve Sabol tragically passed away at the age of 69. His Father died in 2015 at the age of 98. NFL commissioner, Roger Goodell’s summary of Sabol’s contributions to the sport said it best:

“Steve was an incredible visionary, He spent 50 years at the NFL and changed the way we see pro-football. So, when you’re watching NFL games this week, it’s worth remembering how much Steve contributed to the way we think, see, and love our game.”

I have learnt more about football and the History of the NFL from the stories told by Steve Sabol than I have ever learnt about any subject from anybody else in my life. Without Sabol, I would not have anything close to the knowledge that I do, not just when it comes to football, but sports in general. Without Sabol’s films, I may still be interested in sports history, but I doubt I would have the same desire to learn about sports and to share the knowledge that I have.

During Sabol’s time at NFL Films, the company was awarded over 100 Emmy awards and they are well deserved. Now, Sabol is a member of the Hall of Fame, a museum already covered with his cinematography and artwork. His legacy will live on forever.