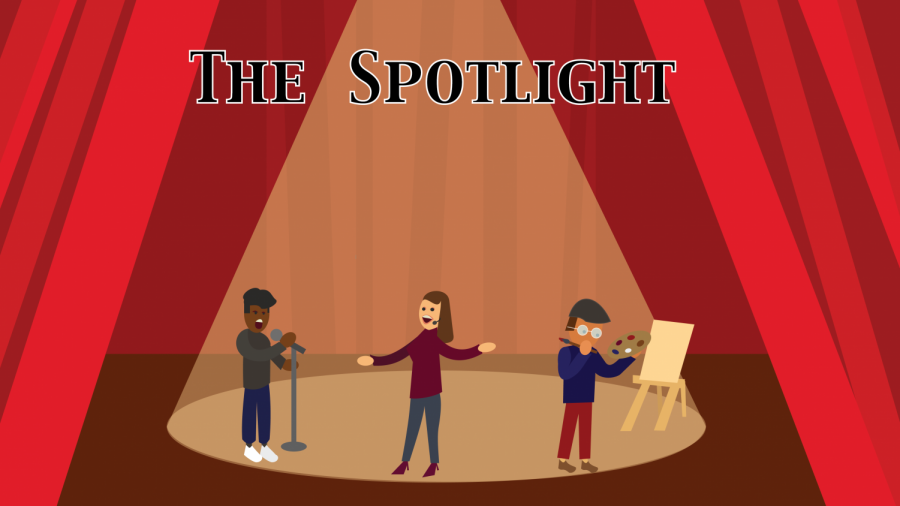 Senior Christina Spillman’s life has revolved around the performing arts since she was a child. School was one of the first outlets for her to express her passion for acting in front of an audience.

“One thing people don’t know about me is that I went to a private Christian school for the first 12 years of my life,” Spillman said. “think that genuinely affected my performing career because they did a Christmas play every year. We were also required to be in choir and band, so that definitely pushed me toward enjoying being on stage.”

Spillman continued to work toward her goals of being in the spotlight as she got older. In high school, she was in handful of shows including Romeo and Juliet and Almost, Maine. Despite not being the lead, she was gratified by the roles she scored.

“When I was in high school, I did not get cast a lot,” Spillman said. “I was very much an ensemble person and worked backstage. We did this show called Almost, Maine, which is a series of scenes revolving around love. I played a character called ‘the wife.’ I had three lines in the whole show, and I had someone tell me after the show that I was their favorite character because I was the only one on stage who knew what I wanted. I was like, I’ll take it.”

As she neared the end of her high school acting career, Spillman looked for college programs that would keep her involved with her passions. She knew she wanted to go in the direction of studying theatre but allowed herself to have alternatives.

“I was very conflicted about what to study because I wasn’t very confident in my ability as an actor,” Spillman said. “I only applied to BV as a theatre major and Florida State as an English major. I decided that whichever one I decided to go to, that is what I am going to do. In my heart I wanted to do theatre, it’s what I love to do and what I’ve done for my whole life and I can’t see myself doing anything else.”

After receiving a scholarship to Buena Vista University, Spillman left her home in Sarasota, Florida, and arrived on the Storm Lake campus as a theatre and media studies major with a gender and women’s studies minor. Throughout her time at BVU, she has starred in several plays and musicals including Spamalot, Noises Off, Radio Daze, and one of the most impactful to her, Woman Wonder.

“Woman Wonder was an original script written by Bethany Larson, Wind Goodfriend, and several other female professors on campus,” Spillman said. “Seven actresses performed the monologues and I got to be part of that. I was nominated for the Irene Ryan scholarship competition through the Kennedy Center American College Theatre Festival. We got to take the show to Des Moines and perform it at a professional theatre, which was really cool.”

When she is not on stage, Spillman is busy working on personal projects and creating performance pieces for her theatre classes. She has also had the opportunity to be in front of cameras by starring in short films.

“I worked with Zach Hess on his short film that he directed,” Spillman said. “I got to act with Bethany Larsen and Jerry Johnson. I’ve done other student films before and acted in some of my own projects through film classes in high school.”

Right now, Spillman’s focus is on getting through the rest of the semester as she inches toward graduation. With only one month until she receives her diploma, she is excited for her future in the performing arts. She plans to be a successful stage actor, live in New York, and publish the plays she has written. Additionally, she wants to go beyond her bachelor’s degree by getting a master’s in dramatic literature and a Ph.D. in theatre and film studies.

“I think what sets me apart is the fact that I love it more than anything in the world. My career is the most important thing in my life, and I have put it first past many things. I would do anything to be successful,” Spillman concluded.