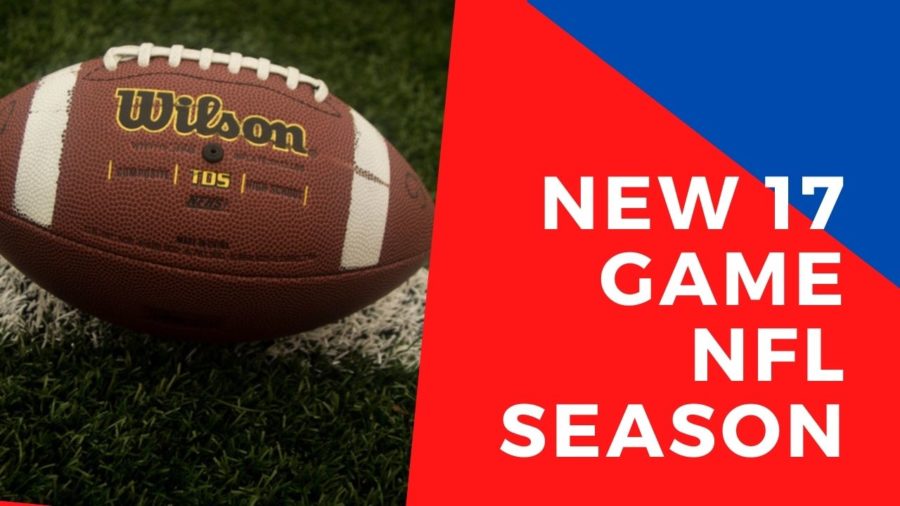 Recently the NFL announced that 2021 will be the first regular season not to have 16 games since 1977. An additional regular season game will be added to the schedule of each team in the league next Fall. The NFL is very selective with team’s schedules. Each team has a home and an away matchup against the teams in their division. Each division in the NFC plays each team from the other conference in the AFC and the out of conference divisions that play against each-other rotates each season.

As of 2021, according to NFL.com “Each club will now take part in an additional AFC vs. NFC game based on division standings from the prior season and on a rotating divisional basis with AFC teams as the home squad for the additional game this season.”

This means that the selected divisions for each season will play against the team that finished in the same position that they did in their division last season. For example, the NFC North will play against the AFC West. The Green Bay Packers won the NFC North in 2020 and will therefore, play the 2020 AFC West Champion, Kansas City Chiefs. The AFC team will host the extra game in 2021. The NFC team will host in 2022.

For reference the 17th game will feature the following:

This news has NFL fans on the fence. Many are excited because it is an extra game for the fans to enjoy. Others are worried about the increased risk of player injuries. This is understandable because injuries are an unfortunate part of sports and they can ruin a team’s season. However, it is only a one game increase. In 1978 the Regular Season extended from 14 to 16 games. The rules in place in 1978, without a doubt, made the game much more physical and thus made players more prone to injuries than today. The protective equipment was also nowhere near as advanced as it is in modern times. If the players from the late 70’s could adjust to playing two additional games when the rules allowed football to be considerably more violent; then present-day players will be just fine playing one extra game. Especially when you factor in that teams will play three preseason games instead of four and that all teams are granted a bye week; a luxury that teams in 1978 didn’t have. That’s not to say that injuries will-not occur. Injuries are almost guaranteed in any season. But a 17th game should-not make all the difference to the players health and safety.

Fans that started watching the NFL after 1978 have become used to the 16-game schedule. We know approximately how many games each team needs to win in order to make the playoffs and how many wins constitute a successful season. But I’m sure adding an additional game will be easy enough to become accustom to. The thing that maybe more difficult to assess is stats and records.

Prior to 1978 there were multiple records that few people believed could be broken. The first that comes to mind is OJ Simpson’s former rushing record. Simpson rushed for 2,003 yards for the Buffalo Bills in 1973, a record which stood until it was broken by Eric Dickerson. Dickerson rushed for 2,105 yards in 1984 for the Los Angeles Rams in 16 games. Dickerson still holds the record, but Simpson averaged more yards per game with 143.1.

Another pre-1978 record that seemed unbreakable was Sonny Jurgenson passing for a (then) record, 3,747 yards for the Washington Redskins in 1967. In second place, excluding Jurgenson’s 1961 season, was Johnny Unitas passing for 3,481 yards for the Baltimore Colts in 1963. It appeared as though Jurgenson’s record for passing yards, especially with the rules in place at the time (pre-Mel Blount rule) couldn’t be touched. It was-not broken until 1979 when Dan Fouts passed for 4,082 yards. In 1980 and ‘81, Fouts averaged better numbers than Jurgenson (post Mel-Blount rule.)

One record that has stood the test of time from pre-1978 is Dick “Night-Train” Lane, who intercepted 14 passes in 1952 as a member of the Los Angeles Rams.

The last time the NFL season was extended, the records started to fall thanks to the additional games played. It seems almost certain that some of the current records will fall thanks to the help of a 17th game. So which records will stand the test of time like “Night Train” Lane’s interception record? And which will be broken like Simpson’s rushing record and Jurgenson’s passing record? The future is impossible to predict but the records that most seem to believe to be in jeopardy are: Passing yards, rushing yards, and passing touchdowns in a single season. Will these records be broken with an extra game?

In 2013 Peyton Manning had arguably the greatest single season ever by a Quarterback. his rapid release and unrivaled football IQ, combined with a talented receiving core, allowed Manning to rip defenses apart all season long. Manning averaged 342.3 yards per game, so to truly have a more impressive season than Manning, a Quarterback would need to pass for over 5,819 yards in a 17-game season. But will a Quarterback manage to break 5,477 yards with the help of an additional game?

Since 2013, the most passing yards in a season came in 2016 when Drew Brees passed for 5,208 yards. So, it is reasonable to assume that if Brees had a 17th game in 2016, he would have broken Manning’s record. The average number of yards passed for by the winner of the passing title each season since 2013 is 4,952. If a Quarterback passes for 4,952 yards prior to his 17th game of the season, he would need to pass for 525 yards to tie the record. Therefore, Manning’s record is unlikely to fall in any given season. But I would expect this one to be the most likely to eventually be broken considering multiple Quarterbacks (Jamies Winston, Ben Roethlisberger, Drew Brees) have passed for over 5,100 yards since 2013, and a QB passing for over 377 yards in a game is not uncommon in today’s pass happy league.

By applying the same logic, the highest number of touchdowns passes in a season since Manning set the record at 55 in 2013, was Patrick Mahomes’s 50 touchdown passes in 2018. This averages out at 3.125 per game, meaning with an extra game it is still statistically unlikely that Mahomes would have eclipsed 55. The average number of touchdowns passed for by the season leader since 2013 is 41 (rounded up), meaning 15 touchdowns would be required in the 17thgame to break this record. Not happening. Baring a miracle season reminiscent of Dan Marino shattering passing records into smithereens in 1984, which with inflation is the equivalent of approximately 59 touchdowns in 2019 (see: Mahomes breaks Marino’s 34-year-old record) this record will be safe.

The rules and the way the game has played has changed so much since 1984, so applying the same logic to the rushing champions in every season since 1984 would hold little weight. However, last season Derrick Henry rushed for 2,027 yards and had an unbelievable end to his 2020 campaign, averaging 177.5 yards in his final four games. If Henry played a 17th game, you would assume that he would rush for the necessary 79 yards needed to surpass Dickerson. That being said, Henry was held to a mere 40 rushing yards against the Ravens in the wildcard playoff game. So maybe he wouldn’t have succeeded. Unless Henry has a season similar to 2020, which is unlikely considering no player in NFL History has ever rushed for 2,000 yards in a single season more than once, Dickerson’s record will be safe. With the exception of the Titans, no team today runs the ball often enough to give a player a chance at breaking the record.

The NFL adding an additional game certainly goes against the tradition that has been in place since 1978. However, it is an extra game for fans to enjoy. Of-course the additional game makes it easier for players to break single season records and in the long run, possibly career records. But the records currently in place are still remarkable. To break a single-season record, even with one additional game, is still a daunting task.