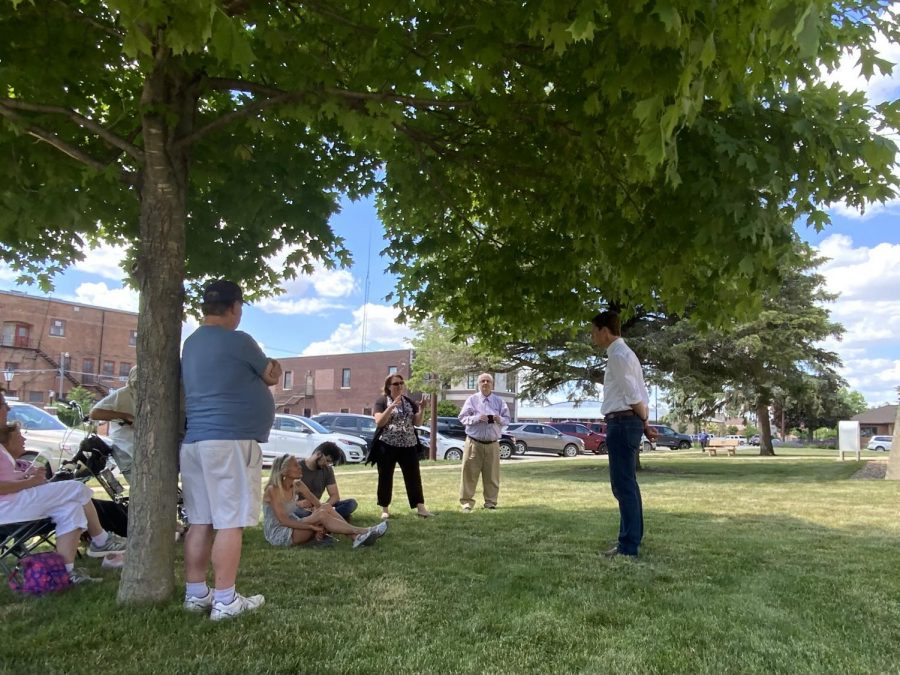 “Rob Sand should have run for governor in 2018…” Jake Webster, a student at Iowa State University tweeted. “Send tweet.” Sand is not a Pittsburgh, PA politician, though. He’s the current Iowa State Auditor. Sand, who keeps a steady eye on his personal Facebook and Twitter, followed Webster back, as he does most of those that follow him. The sentiment about running for governor, though, is something he’s yet to follow back on.

Inviting Storm Lakers midday to a town hall event at the courthouse lawn on June 9, Sand stirred more speculation concerning a possible bid for the seat now held by Kim Reynolds. Sand has heavily alluded to a run for governor in his recent public appearances, making big statements on issues that can’t be completely fixed at the State Auditor level, like financial routing from the governor’s seat.

In Storm Lake, Sand dissected how the American Rescue Plan can help mitigate the spread of Covid-19 among anti-vaccination Iowans. “American Rescue Plan is going to keep us all busy for a year, but busy in good ways,” he said. “There’s so many ways to mitigate the pandemic. One is building outdoor spaces.” Sand gestured to the grassy area of the courthouse lawn. “If you haven’t got a covered area with picnic benches and you haven’t got a gazebo in the courthouse square, that would be awful.”

“If that’s a place where the public can go,” he continued. “If that’s a place where county employees can go,” making eye contact with Julie Sather, the Buena Vista County Public Health Director, who introduced herself to Sand as someone glad to be outdoors after being in an office all week. “That’s going to mitigate the pandemic because outdoor transmission, it’s incredibly, incredibly rare.”

Sand is also looking to promote PIE in Iowa — not the dessert, but Public Innovation and Efficiencies. PIE is a form on the Iowa Auditor state site through which Iowans can submit feedback or ideas to a checklist of ways taxpayers’ money is allocated. “I’m going to be traveling around the state this year to some counties and cities to deliver pie to celebrate the leadership at the local level.” Actual pie for PIE. The best PIE ideas submitted will be published and spread around the state to improve the use of taxpayer dollars everywhere.

“We have $1.2 billion that was just sat on while 750 restaurants in the state of Iowa went out of business,” Sand said. “No fault of their own, people who put their blood, sweat, and tears into their community, providing a handful of jobs and gathering place.” Think Better Day Café. The liberal nucleus of Storm Lake that hosted figures like Julien Castro and Bernie Sanders closed 15 months ago at the start of the pandemic.

Sand wrapped up by reminding attendees to join him Tuesdays at 4:45 for Transparency Tuesdays,  and replies to any messages on Facebook or Twitter personally.