Adam Clayton Powell: A symbol of righteousness and leadership 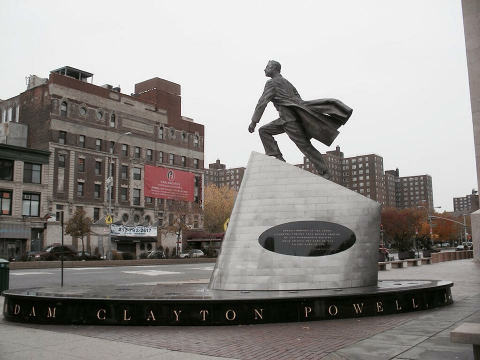 The light of the sunrise has captured the glaring of the silver metal. The light of a new day of the progress towards liberation for all.

Located in 125th Street in East Harlem, New York, the Adam Clayton Powell Jr statue sits amongst stores and supermarkets, passed daily by adults and teenagers on their way to work and school.  Just down the block from the world-famous Apollo Theater, the statue is a monument to Black history and the struggle for racial justice. The statue is called “Higher Ground” and includes the quote from Powell himself, “Keep the faith, baby; spread it gently and walk together, children.”

Designed by sculptor Branly Cadet in February 2005, the monument honors Adam Clayton Powell Jr. He was the first African American to be elected from New York to the U.S. Congress. Powell represented Harlem for 12 terms and was a major part of the borough’s development as a neighborhood. He was viewed by his Harlem constituents as a dedicated crusader for civil rights, and he earned the loyalty and respect of many African Americans with his confrontational approach to racial discrimination. Not one to shy away the spotlight, the New York minister and politician used his position as a for the advancement of African American rights.

Powell died in 1974, but the statue is a reminder of his legacy and has resonance in the neighborhood today, in thismoment of racial awakening.

Joseph Jenkins, a Harlem resident for over 18 years, explained how the Adam Clayton Powell Jr statue is a reminder to remain hopeful despite the little changes in terms of African American men and women being killed by law enforcement. The image of Powell Jr walking uphill provides hope. “When I see this statue, I see light and hope because Adam continued to fight for what he believed in, even when he was being ostracized from all sides,” Jenkins said.

Jenkins explained he is excited by what he sees from today’s activists in our society.

“It’s great to see people stand up for an issue that has continued to occur for decades and decades,” he said.

Yave Parker, a Harlem resident for over 15 years, agrees that the fight against racial injustice that Powell Jr focused on must continue.

“We have to stand up because this issue has been going on for so long without repercussions and damaging our people for so long. No one said it will be easy, but with the help of our community and outsiders, this moment will be in the history books for the impact it created for so many African Americans and people of color as a whole,” Parker said.

Parker explained that the statue of Adam Clayton Powell Jr reminds her and all of Harlem to keep fighting.

“This statue shows Adam walking towards something with a determined look on his face, which to me, means face every challenge head on without fear or criticism, Parker said. “Given everything the Black community has and continues to face, we never give up! “

When people walk by 125th street and see the Adam Clayton Powell statue, they see three things. First, they see someone who gave it their all despite their circumstances.  Secondly, they see 40 years of service to the community that rejuvenated Harlem forever. Lastly, like Joseph Jenkins does, they see hope. Jenkins said that the statue reminds us of all to heed the words of “the great Adam Clayton Powell” to as Jenkins put it, “Keep the faith, baby; spread it gently and walk together.”