Through the Eyes of the International Students 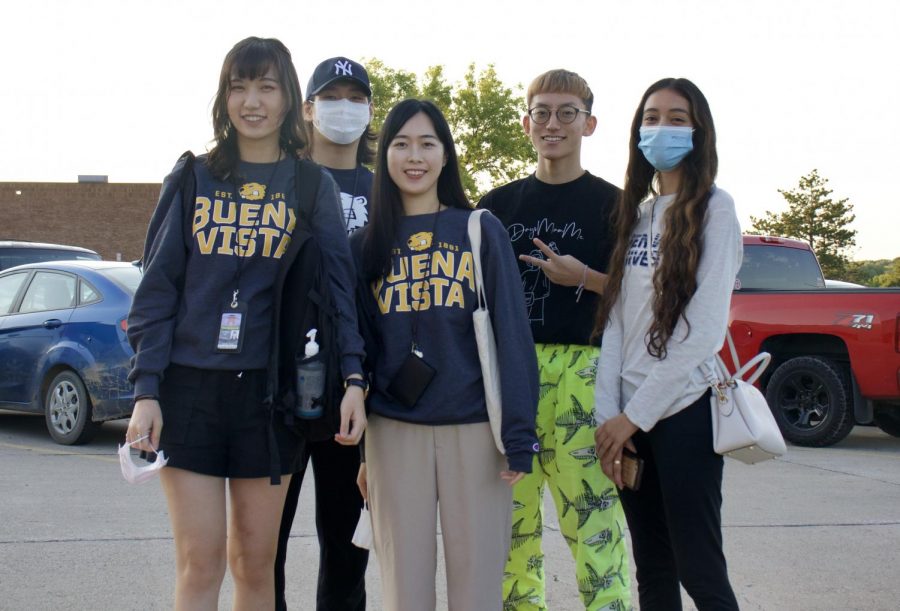 Imagine living in an entirely new country for several months up to a year. People do this all the time, but what is it really like?

Buena Vista University has been bringing in students from across the world for over 50 years. We’ve had students from Brazil, Ghana, Korea, India, China, Rwanda, and Japan enroll at BVU.

This year, in particular, we had four new international students arrive on campus, all of which I have gotten to know very well during the past two weeks.

Upon their arrival, the students were required to quarantine in their rooms. They took this time to connect, quickly becoming each other’s support system.

Initially, the students were timid, as anyone would be in a new country. The more time they spent out on campus, the more comfortable they became, not only with each other but with the people around them including those at the Center for Diversity and Inclusion.

“One of them, in particular, was very introverted and shy. Now he’s out there on the soccer team, laughing and joking about stuff,” Dr. Joel Berrien, Jr., the Senior Director for Diversity & Inclusion, said when depicting the change in behavior he’d seen in one of the students.

It is also worth mentioning the student’s initial reactions to being in a new country. Dr. Berrien, along with the Assistant Director for Diversity & Inclusion, Joanna Chavez DeLeon, got to witness this first-hand.

During their first-ever visit to Walmart, they were overwhelmed by everything the store had to offer.

“Every stop they took, it was a picture,” Chavez DeLeon said.

“It was really neat to see how excited they were about stuff that was kind of mundane to most of us,” Dr. Berrien added.

After hearing about each student’s initial experience being in a new country, I thought I would take them to explore something new myself. Together, we visited Sioux City, Iowa, a place that I’ve visited countless times but to them is foreign.

We began our journey at the Southern Hills Mall.

The students wandered about the stores, fascinated by the various items displayed on the walls and the racks. Their eyes would light up when they’d find something they recognized. I found viewing the mall through their perspectives to be enlightening.

After shopping, we agreed on concluding our mall adventure by playing laser tag. This was a great opportunity to connect. After two long games, we left the building with sweat from our heads to our toes. Nevertheless, we enjoyed the time we spent together.

Ultimately, the students got to explore life outside the small town of Storm Lake, Iowa. They also learned more about the culture by talking to different people, visiting new places, and trying new things, like laser tag.

I learned something new as well— how much we take things for granted. If we began to observe life from their perspective, everything would be less dull. Most importantly, we would begin to appreciate the littlest things more often.