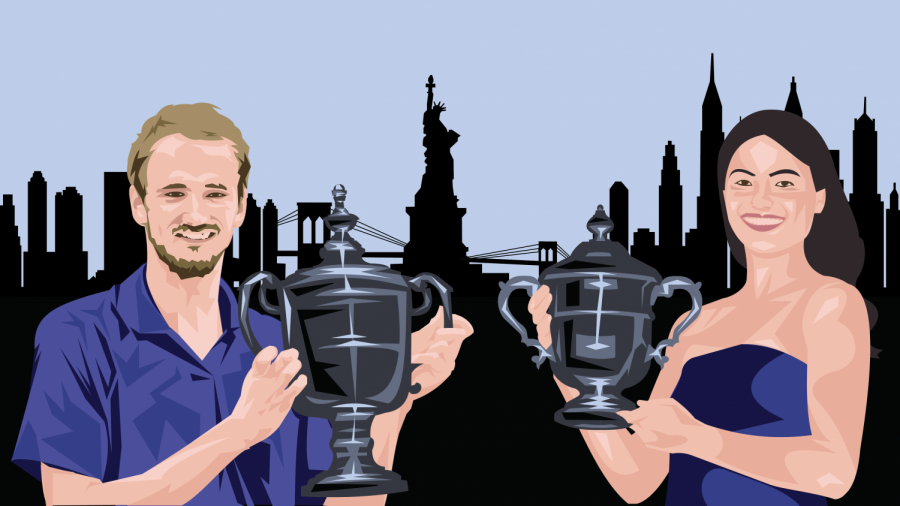 At the beginning of the U.S. Open on August 30th, both Emma Raducanu and Daniil Medvedev were still searching for their first major tournament trophy. On the weekend of September 11th, they both crowned 2021 U.S. Open champions. The similarities stop there as these players had very different stories that led to them playing for the title at Flushing Meadows in New York earlier this month.

This time last year, Emma Raducanu was a 17-year-old schoolgirl, from London, England, who also happened to play tennis. No doubt she was tremendously talented, she was of course a part-time professional player when she wasn’t dedicating time to her studies. But very few, if anybody at all, could predict that within the space of a year, she would become a phenomenon by winning the U.S. Open, despite being ranked number 150 in the world. This was made possible by her playing some of the most exciting and flawless tennis.

A glimpse of Raducanu’s talent was first broadcasted to tennis fans at Wimbledon in July. She surprisingly fared very well, reaching the last sixteen before having to withdraw due to breathing problems. Raducanu may not have taken home any silverware, but she managed to catch the attention of the British public.

Less than one month later, Raducanu picked up where she left off, not in the U.S. Open itself, but in the qualifying stage. Despite a good run at Wimbledon, she did not receive automatic qualification for the U.S. Nonetheless, she breezed through to the main event.

Despite playing at a high level, the unseeded 18-year-old still didn’t seem to start turning heads from the neutral supporters. Not until she reached the quarter final and was faced with the task of beating the 11th seeded Belinda Bencic from Switzerland. Raducanu found herself down 3-1 in the first set against the more experienced player, who took advantage the unforced errors that her opponent gave her. However, Raducanu quickly overcome her nerves and settled back into playing the style of tennis that got her this far. Using her unique mix of ultra-quick footwork, and precision power shots, to steal the momentum. Bencic often managed to dictate the speed of the point and control the tempo. But Raducanu displayed an ability that the majority of players on the women’s tour have lacked since the late 2000’s. Using her athleticism to run from tramline to tramline and play defensive tennis until an opening appeared allowing her to hit a winner down the line. Bencic put up a respectable fight and proved to be Raducanu’s toughest challenge of the competition, winning 6-3, 6-4.

Bencic stated in a press conference after the match “She [Raducanu] was very solid, she stayed tough, played her game, and didn’t let me back in it.”

Raducanu won the Semi final against Maria Sakkari convincingly by a score of 6-1, 6-4. Then proceeded to play another unseeded teenage player, Canada’s Leylah Fernandez for the right to be crowned queen of the U.S. Open.

Fernandez in her own right was already having a phenomenal tournament. Her most notable achievement was dethroning the reigning champion, Naomi Osaka in a tightly contested third round battle that finished 5-7, 7-6, 6-4. The final was by no means a guaranteed victory for Raducanu. The first set proved that to be true. A close back and forward set, with both players constantly returning each other’s punches, in the form of remarkable high velocity serves. The tennis equivalent of a fight between Marvin Hagler and Tommy Hearns. But similar to Hearnes, who in the famous 1985 heavyweight fight went toe to toe with Hagler in round one and lost by knockout in round three; Fernandez couldn’t maintain the same standard of tennis in the second set.

Fernandez did jump to a 2-1 second set lead. But Raducanu managed to re-acquire the momentum by winning the next two games. One point in particular made it clear who the victor on the afternoon would be. At break point with the score 3-2, 30-40, in favor of Raducanu with Fernandez serving, Fernandez hit a beautiful serve to Raducanu’s backhand, which was blocked back over the net, setting up Fernandez for a routine winner. Astonishingly, Raducanu’s quick reaction to the ball made it possible for her to return the most aesthetically pleasing shot of the afternoon, a blocked forehand shot down the line to win the game. The final set was won 6-3.

Raducanu stated in her speech after the match “It was an incredibly difficult match. But I thought the level was extremely high and I hope that we play each other in many more tournaments and hopefully finals.” A message I can certainly get behind, as these are two very talented players that play an exciting level of tennis.

Raducanu became the first British player to win a grand slam tournament since Virginia Wade won Wimbledon in 1977. She also became the first player in the history of the U.S. open to win the tournament as a qualifier, an incredible achievement. But a more remarkable achievement was the fact that she won every match without conceding a set, winning 20 consecutive sets against some of the highest ranked players in the world. Even without context it would be an impressive accolade, but all things considered it is astonishing.

On the men’s side, the story of the two-week event was whether Novak Djokovic would become the Male first player since Rod Laver in 1969 to win all four major titles in one year to complete a calendar grand-slam. With the absence of Roger Federer and Rafael Nadal, Djokovic had the best chance that any player has had in decades to pull off this achievement. Djokovic reached the final and the stage was set for his coronation. But Daniil Medvedev had other plans.

Medvedev, the Russian, six foot six, number two seeded player, had been knocking on the door of a major tournament victory in recent years, appearing in the 2019 US Open and 2021 Australian Open finals. Medvedev is a player that possesses exceptional lateral movement, speed, and an arsenal of dominant shots (mostly from the baseline) that strike fear into the opposition. His lengthy frame of body also allows him to display the ability to hit a serve as if he is standing on top of a small balcony overlooking the service box. When Medvedev plays his best game, he is extremely difficult for anybody to beat.

Medvedev succeeded in this approach all the way to the semi-final against Canada’s Felix Agur-Aliassime. After winning the first set 6-4. Medvedev found himself trailing 5-3 and was faced with the challenge of defending set point on two separate occasions during the game. Medvedev fended off both of the points. He then stole the momentum by hitting laser accurate, sensational forehand shots into corners that made it impossible for Agur-Aliassime to return. Finishing the second set off with a lightning quick ace to Felix’s backhand side. Medvedev took the third set convincingly 6-2. During which he displayed his defensive talent by returning a textbook level serve and hit it straight down the line for a winner.

Medvedev has the talent of a young John McEnroe but also possesses his temperament at times. He has been known to speak his mind to umpires and lose his cool at times. That likely had a baring on how the crowd reacted to him, making it clear that the majority of the supporters in Arthur Ashe stadium were not on his side. Especially in the final. The crowd often “booed” the Russian between serves and occasionally during a serve.

Medvedev did not allow the crowd to affect him. He remained calm and took the approach of playing from the baseline, hitting consistent ground strokes with a high of topspin and waiting for Djokovic to make unforced errors. It worked perfectly. Djokovic committed 38 unforced errors on the day. Medvedev hit 38 winners into spaces on the court that were deemed unreturnable for even one of, if not the greatest, defensive player in the history of tennis. Medvedev won the match in straight sets, winning by a score of 6-4, 6-4, 6-4.

Medvedev stated in his speech after winning the match that he had a lot of respect for Djokovic, addressing him directly saying “To me you are the greatest player in the history of tennis.” He also mentioned a factor which perhaps gave him extra motivation to win “Today is a special anniversary for me and my wife and I thought I had better win this match as my gift to her because if I lose, I won’t have time to go and buy her a present.”

Thanks to Daniil Medvedev’s exceptional performance, this match will be remembered as the day that Novak Djokovic almost won the calendar Grand Slam. As it stands, the last player to win a calendar Grand Slam was the Queen herself, Steffi Graf back in 1988.