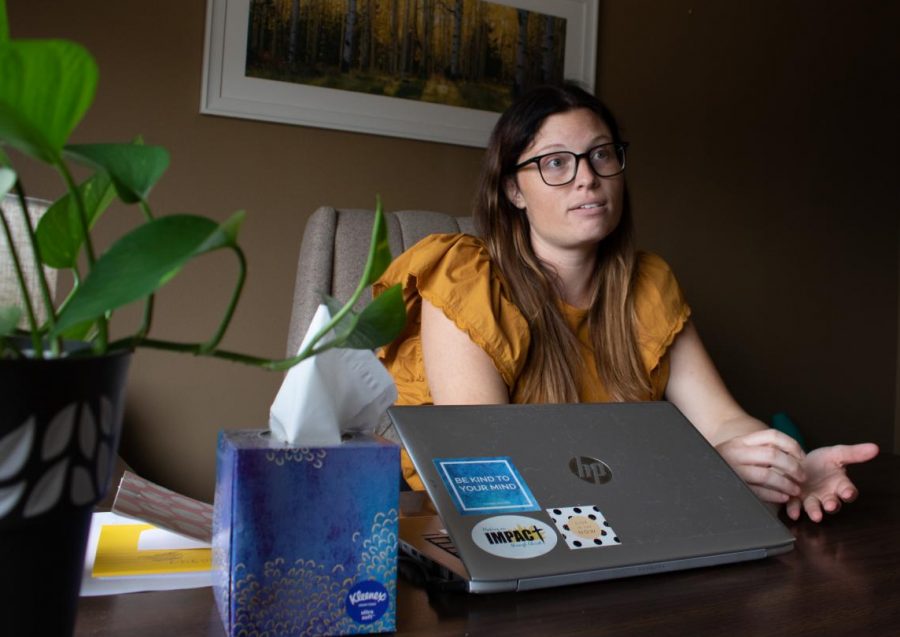 What do Storm Lake, Iowa and Spokane, Washington have in common when it comes to the mental health landscape? Private practices started by Buena Vista University Professor Kathleen Ruscitto.

And just like that, Heartland Counseling Services was born. It isn’t her first private practice — her previous was in Washington. Opening a private practice before helped; this time, it was easier. “Doing it previously, there was a lot that I did know already so I think that really helped. I think there was just making sure that the university was comfortable with me also doing this just to make sure they were okay.” The space opened on July 1, 2021.

A place like Storm Lake offers chances. It’s a small town that is always asking for more, never growing but never staying the same either. Ruscitto says that this sort of community ease helped her get this practice going. “Coming here, it really reminded me of a town back east. I felt really comfortable.” Ruscitto wanted this in the universe, and the universe wanted it back for her. When asked what the hardest part was of opening Heartland Counseling, she has no answer. Instead, she says, “Things have kind of just gone in this direction, easier than it ever has been for me. Starting this was kind of that way where everything just fell into place, time frames and people, and all that just worked out on its own. So oddly enough, I don’t know if it was that great of a challenge. If certain things hadn’t fallen into place I wouldn’t have been able to do this, and they did.”

Heartland Counseling has unique opportunities for those in the community. Something that is scarce in Storm Lake is the link between body and mind. Filling that void is Heartland’s yoga classes and interpersonal communication with chiropractors in the area. “We have counselors both in-office and offer tele-health. We have yoga classes going on because we believe in mind and body wellness. We have those classes and meditations classes.”

BVU graduate David Kirk has the biggest office, as he sees children and families, Ruscitto explains. Kirk has paintings on his office wall that are carefully curated, with mental health in mind. “I select all of my art based on the artists in order to normalize diagnoses. So, all of the art represented in this office is by an artist who had a mental illness.” A Vincent Van Gogh print, the artist who had depression and anxiety, hangs on a wall next to Kirk’s desk. Francisco de Goya, Edvard Munch, and Louis Wain also adorns Kirk’s walls. They symbolically represent success among depression, anxiety, and schizophrenia, illnesses spread across the four artists.

Ruscitto’s dream of bringing a counseling service comes with fulfillment. The most fulfilling part is working in her team. “I love meeting with individuals who work for me and those that work with them. I love facilitating the growth in them as individuals in practice now and seeing them work towards their license. It’s very rewarding for me and for them.”

Anyone interested can visit www.heartlandcounselingia.com for a full list of counselors and services provided, as well as accepted insurances. Intake paperwork can conveniently be submitted online. From there, appointments can be scheduled by calling (712)-213-2205 during office hours.