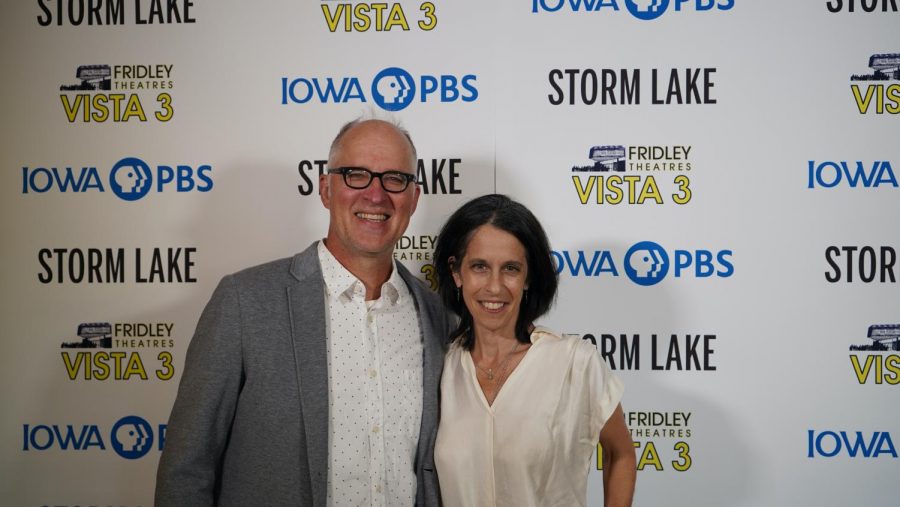 Directors Beth Levison and Jerry RIsius at the premiere of their documentary 'Storm Lake'.

Critics are calling ‘Storm Lake’ a stirring mission statement wrapped in a survival tale. As the film enjoys a successful fall tour, directors Jerry Risius and Beth Levison are sharing the small town of Storm Lake with the country. The Tack’s co-editors took the chance to speak with the film’s co-directors at the start of the tour — talking the Rubik’s Cube that is documentary-making, the art of capturing Art, and what a microcosm the town is.

Hannah Kramer: So, is there anything you would do to change about the outcome of this production?

Jerry Risius: Well, I like the way that it turned out. I’m not unhappy at all. I don’t think so, because you want to stay true to the story, and we can’t change the Cullen’s lives, right? We just documented and tried to stay true to their story.

Beth Levison: Well, what they say about making a film is that a film is never done and you have to stop at a certain point; maybe because of its schedule or the budget, and those are things we are up against. So when I do watch it sometimes — I love the pacing of the film, so pleased with it — but I will admit, there are moments where I’m like, “Oh we could’ve trimmed that”, “We could’ve made that shorter”, “We could’ve tightened that.” When I watch the film I fixate on those moments.

Blake McMillan: Does any one moment come to mind?

Beth Levison: Yeah, there’s a moment where John says, “I’m living on social security,” and then Art is kind of hunched over and the camera goes to him and he’s like, “Just making sure that…”

Beth Levison: Yeah, yeah! It’s like, we could’ve just gone out much sooner. That’s the hard thing, right? Is it ever really done? But I think we’re both really happy with it.

Kramer: I overheard you had over 300 hours of footage and you were able to cut that down. Please tell me, what is your process of picking one section over the other?

Jerry Risius: We tried to cut scenes out of everything. There were a handful of things that we had to just say no to. There were other things we really struggled with, having to figure out based on the ensemble of five characters and what they did. We didn’t want to make a political film but about what the reporting was, so we did local politics, we did national politics, we did state politics. Eventually, we had to make hard decisions about what to use and what not to use. We also had to make decisions about local reporting or being onstage with national politicians. The process was looking at everything, cutting it down, seeing where each of the stories would lead and how they would collide with each other. It was sort of like a Rubik’s Cube.

Beth Levison: I think a key thing, too, is that when you’re making a documentary, you don’t know where things are going to go. You want and need to tell a story and once COVID hit, we knew that was going to be in the last third of the film. We knew that’s where the narrative was going toward, so then, how do we build the pieces to get there? We had to establish that this was an agricultural community where there are meatpacking plants. We had to establish this was a diverse community. So in some ways, knowing where we were going at a certain point, we knew the chronology, but thematically knowing where we were going did help us to build the narrative and figure out what scenes we needed to tell the story.

Kramer: When you choose to make those difficult decisions, do you focus what you personally like more or what the audience might enjoy more of?

Jerry Risuis: As a documentarian, we wanted to stay true to the story. The more time we spend with it, even if the story doesn’t reveal itself as obviously, it’s hard to understand where their story will go. So it was really tough.

Beth Levison: I mean, decisions were made by what’s best for the film, what is authentic to the story and the narrative, and that was really hard — even to just know what story you’re trying to tell. I think you try to move your biases aside and really focus on telling that story as best as you can.

Jerry Risuis: We didn’t want it to be about politics; yes, the Cullens are reporting on politics, but they’re not politicians. We get to see them moving in and out of those political theaters with both parties. Even though it is 2019 and 2020 and we’re removed from these situations by a year or two years, they were still big years, especially for Democrats. We include those elements not by our choice but simply by the choice of what was happening in the country, and you have different politicians coming to the town. Then, we also seek out the other politicians who came in. You have Chuck Grassley and then Mike Pence as well, and we need to see the Cullens reporting on it.

Beth Levison: We have real rules to sort of work by. When Art says [in the film] our motto, “If it didn’t happen in Buena Vista County, it didn’t happen,” that focused the world of the film for us.

Jerry Risius: Early on, we got invited to like…

Beth Levison: Oh, yeah, to a bunch of different things.

Jerry Risius: I think there’s a handful of things we were invited to, including Art going to accept his Pulitzer. We travelled with them, we raised money to travel with him and then show Art interacting with all these other places.

Beth Levison: And that’s not the story we’re telling at all.

Jerry Risius: Right. It’s about the newspaper and the community. We really made those decisions because this is about the county. And yeah, he really tells us with that motto, that it’s all here. So we’re going to stay inside the community.

Beth Levison: And also we worked really hard to clarify all of the Cullens’ role in the story. Art is the editor, Delores is the human interest pieces, John is the publisher. We had really wonderful scenes of John reporting, but it sort of muddied the narrative, so we had to really focus on them and their roles that they play in the paper.

McMillan: What’s something from production that has stuck with you the most, whether it be during filming or post-production?

Jerry Risius: I think it might be the human connection with the Cullens. I just think they’re fantastic. I’ve grown fond of them, and I think that’s cool to not become overly subjective with the matter that you’re filming with. We’ve maintained that, but I also really admire the work they’re doing. It was a work of trying to make sure fun and staying true to their story. Being with them, seeing them stay in the offices past midnight, getting up at five o’clock in the morning, that sticks with me. It’s hard work, what they’re doing for this town.

Beth Levison: I think what has stuck with me on this production, we had a crew, a sound person, a second camera, but we didn’t want our days to go too long for them. We tried to stick to a ten hour day. Sometimes Jerry and I were like, “We’ll go into the office ourselves, don’t worry about it. We’ll meet up with you at 10 or 11. We don’t think that much is going to happen.” What was amazing was how industrious and busy the office always was, and how much writing they were doing. I think we all have this idea of local papers and how sleepy their offices always were, but it really challenged my expectations, just about what local news is and what it can be and how important it is. I think the other thing is just this community in Buena Vista County and how diverse it is. I think there’s this narrative that’s common or stereotypical about Iowa, so I could’ve never imagined a place like Storm Lake. I think for me, in so many ways I had assumptions or maybe I just didn’t know.

Jerry Risius: We’re both from New York, so, you know, we’ve seen the ‘Midwestern nice’. We’ve seen it and it’s gone from here, but Storm Lake!

Beth Levison: You know what word it is? The word I’ll give you is ‘microcosm’.

Jerry Risius: Yeah. It’s a microcosm, and we are telling a micro-story within a macro-universal story through civic engagement, journalism, and democracy. We’re doing so through the eyes of something not nostalgic, because with a newspaper, a dying business, it can be nostalgic with a little bit of a bleeding heart going, “Oh no, it’s leaving.” No, it’s about trying to maintain what we have grown to love about our country. I believe that’s what they’re fighting for at large.

Beth Levison: And I think so many of the things we talk about on a national level are felt intimately here. So, climate change issues are pressing and recent. Immigration, it’s so real here, and income inequality. The issue around…

Beth Levison: Big business, all these things, you know? It’s so interesting because you think it’s a small town but national themes are taking place and being examined on a small scale. It lets you look at them from a human perspective and shows you how exciting all those things are. Immigration, climate change, big business, income equality, wage disparity. It shows you how it’s all really interconnected. Being able to see how things impact this small town allows us to make connections that we can’t on a huge international level.

This interview has been edited and condensed.