Voting in America: Restricted or a right? 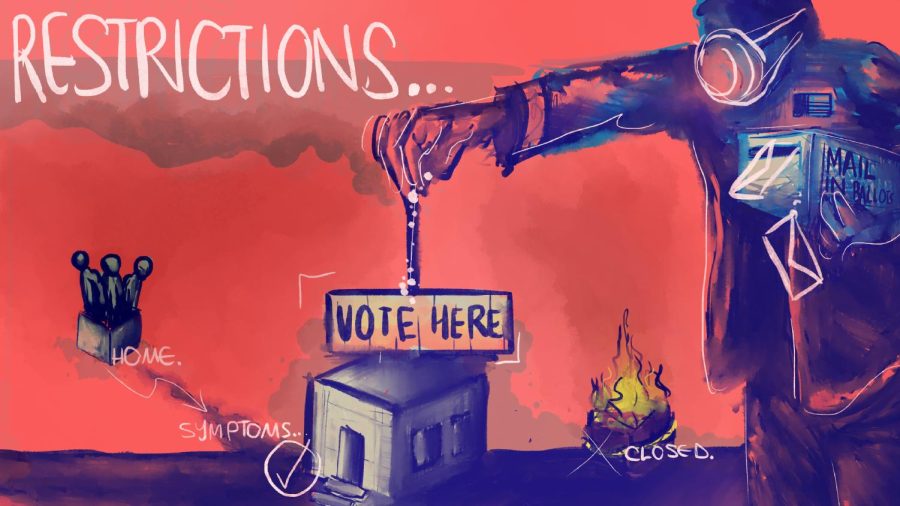 In the 2020 election, American citizens had many different options when it came to voting. There were mail-in ballots, voting centers were open almost 24 hours for multiple days before election day, and absentee ballots. Some people, however, would see these options eliminated. The global pandemic made it much harder for many people to vote in person. The election also came at a time when misinformation was running rampant. President Trump’s false claims of a stolen election made many people question the validity of our voting systems. Though some of these concerns come from a genuine place, it wasn’t long before it evolved into attempts at voter suppression.

19 states passed voting restrictions in 2021 alone, 440 new laws were drafted. These laws employed a variety of tactics such as having fewer voting stations, requiring more identification than necessary, and even eliminating mail-in ballots. Eliminating mail-in ballots would affect lower income individuals much more than any other group. Such changes could also keep certain disabled people from voting, limit access for elderly people who are homebound, and inhibit anyone who didn’t feel comfortable being around large groups during a global pandemic.

The bottom line is anything that makes it easier for the American public to vote should be a good idea. Voting is a right and a responsibility for every American citizen, and by hindering that, you are threatening democracy itself. To help combat this, Senate Democrats have introduced several bills hoping to ensure voting rights to every American. Some Republicans, however, have seen this as an attempt to steal the election, or suppress Republican voters.

The truth is, there’s no evidence that these bills would suppress voters or make fraudulent voting any easier. Fox News had an “expert” pick apart and discuss the bills, especially their issues. Hans von Spakovsky is a scholar for the heritage foundation, who has a long history with election law. His history however, begs scrutiny on his expertise and value of opinion. In 2017 he claimed that democrats and “mainstream Republicans” shouldn’t be allowed on the committee for voter fraud created by the Trump administration. He’s also regularly made claims of voter fraud against the democratic party without any facts or evidence. In fact, most of the information completely disproves Spakovsky’s claims.

Keeping all these facts in mind, it’s not surprising that he was eager to use the voting rights bills as an opportunity to cry wolf. He claimed that “[It] would mandate that states allow vote trafficking: In other words, states would have to allow paid political operatives and candidates and campaign staffers to be able to go to voter’s homes to pick up and handle their absentee ballots, which of course, puts them in a good position to alter or change those ballots, and maybe not deliver them – and to coerce and pressure those voters,” (Spakovsky) So allowing people to vote from home, could result in voter intimidation and fraud?

Seems like an odd accusation, so naturally I was curious to see Spakovsky’s reasoning for this, the specific section of the bill, in this case the John Lewis Voting Rights Advancement Act, that seemed to allow this. However, the only attempt he gave at actual citation was this, “There are so many provisions in here it’s hard to list them all because the bills are so big.” (Spakovsky) This is a common excuse for many claims against the voting rights bills, “oh I can’t remember the specific section because there are so many bad things about this bill.” If you are making claims that are this serious, it seems important to at least have a specific piece of evidence to support you.

In another article by Fox News, House Minority Leader Kevin McCarthy made several claims about the new voting rights bills. He attacked the bill in the same way that many republicans have, but he also made a new claim. “And in this bill, it’s going to propose that every single Democrat can get up to almost $7.2 million of American taxpayer money for their campaigns.”(McCarthy) Now, this claim struck me because it seemed like something that’s hard to hide in a bill. No one else has brought this up, so how did it slip by so many people? Well, the truth is, it’s just a fully false claim. In fact, this bill has made campaign funding a much more transparent aspect of elections. The bill has no proposal involving an increase of campaign funding, in fact it means that any organization or individual that gives more than $10,000 in a federal election to disclose that publicly. So, it seems that a majority of these claims brought against voting rights are either exaggerated, unfounded, or just outright lies.

Voting in federal elections is every U.S. citizen’s right and responsibility. If even one person is prevented from voting fairly, then it means our democracy is failing. That’s why it’s important to defend voting, and all other facets of democracy, because those are the ideals that American was founded on. The real issue here is with politicians using fearmongering to deceive voters. This happens on both sides of the aisle, and when a politician must lie to keep his support, then they are truly an enemy of democracy. If we want to keep America democratic then voters need to start recognizing lies and falsehoods, because it’s clear that some people in power use them to their advantage.