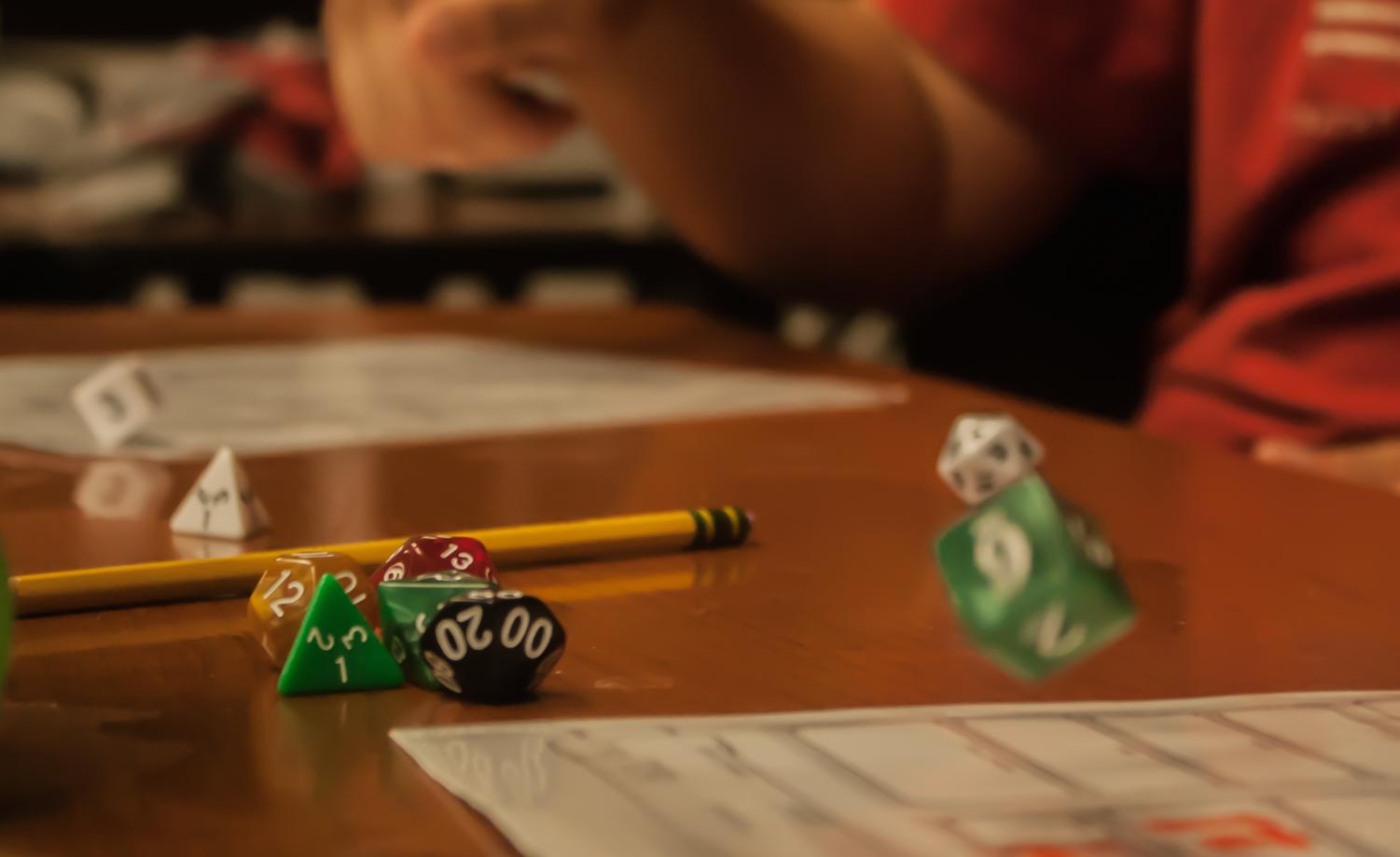 Women Become Gamers in an All-Female Dungeons and Dragons Campaign

On the top floor of Smith Hall, across from the main stairway, sits room 303.  In this room a few weeks ago, scuff marks tainted the floor, and drops of blood were splattered across it.  Six women, planning to clean up the mess, opened a broom closet and gasped as the body of a female alchemist fell out. One of the women, sophomore Darby Baillie, used her D20 to do a medicine check on the body.  After rolling a “nat 20,” Baillie realized the woman was, indeed, very dead.

No, there is no real dead body.  Instead, every other Saturday night, room 303 in Smith Hall at Buena Vista University (BV) fills up with murder mysteries, Russian accents, and a ton of laughter.  An all-female Dungeons and Dragons campaign is taking place.

Dungeons and Dragons (D&D) is a table-top role-playing game in which players ask questions, talk through their characters, and use dice to determine their success at certain actions, such as Baillie rolling a “natural 20” using her 20-sided dice (D20).  D&D has been around since the 1970s, according to senior Ranelle Irwin, the Dungeon Master (DM) of the all-women campaign.

Irwin describes D&D as using “your imagination to come up with certain ideas or scenarios, and also to respond to those scenarios.”

Her role in the campaign is to be in charge.  The DM is the all-knowing, omnipotent being within the game.  She can make anything happen in the world she creates specifically for the campaign.

“Different DMs have different styles of playing,” Irwin says.  “I’m a person that likes building the world and then kind of ad-lib all the characters and stuff in it.  If I have a place to go off of, then I can kind of fill in the blanks as I go along and as they interact with other things.”

The neat thing about Irwin’s campaign is that it is made up of all women players.  In a society that seems to be fairly progressive, you would not think that it would be a big deal.  However, gaming is still one area of society heavily dominated by males.  Senior Emily Gewecke, one of the first-time players in the campaign, has some suspicions as to why.

“It might have to do with the kind of culture you see on TV with a lot of it,” Gewecke says.  “I know the couple times that I’ve seen D&D portrayed on TV, it’s mostly guys’ campaigns.  The first time I even saw it was on Big Bang Theory, and the girls wanted to play, and they were very much against any of the girls playing because they thought it was creepy and weird that girls would play.”

“I had never really heard of an all-girls D&D campaign before,” Irwin admits.  “And I did a little bit of research on it, and there really weren’t that many, at least publicly.”

What she did find is the few girl gamers that are out there often face somewhat biased interactions when it comes to participating in role-playing games.

Patricia Willenborg, better known as Kismet Rose, is one such female gamer.  She has a blog-style website called Kismet’s Dungeons and Dragons, and she has a section completely centered around women in games like D&D.  In one article, she says that she has heard from many female gamers who have experienced biases, like guys controlling their characters and speaking for them without being asked, workers looking at them strangely when walking into a gaming store, and women actually being turned away from participating in campaigns.

“I think girls are just kind of dissuaded from playing it,” she said.

Incidents like these are why Irwin is proud of the D&D culture she and the rest of the Anime and Gaming Society (AGS) have created at BVU.

“I think it’s awesome that BV in general is breaking the stereotype of D&D and breaking the barrier and allowing a lot of women to play,” Irwin says.  “We have about a 50/50 gender ratio of males to females who play D&D now.”

Now, they have progressed to running an all-girls campaign.  The women in the campaign are Irwin, Baillie and Gewecke, along with sophomores Tara Smith, Christina Spillman, Regina Appleby, and junior Mel Graf.  Of these gamers, four of them are playing D&D for the first time.  Gewecke says that an all-female campaign provides a more pleasant experience for first-time players.

“It kind of gave an introduction for people who would kind of be uncomfortable joining a big campaign with people who knew a lot about it,” Gewecke said.  “We are learning a lot about it and getting to do things that aren’t battle-based because that’s a very unique way of doing it.”

Irwin agrees that their campaign not being combat-heavy is not something you see in D&D very often.

“I’ve DM’d two other campaigns in which there were all males present, and they were much more likely to engage in combat with other characters…instead of doing diplomacy and trying to talk things out,” she said.  “It could be virtue of being all girls and wanting to solve their problems with words instead of fighting?  I don’t know.  It’s just been different.”

Whatever the reason, Irwin says that the all-girls campaign is a lot more role-play heavy than she expected.  The women seem to like solving problems through other means before resorting to combat.

“I almost want to keep up the whole murder mystery aspect going and seeing what they can do with different intrigue situations and just more situations in general where they need to speak and use problem-solving abilities to [work out] solutions instead of combat.”

When the party comes across the dead body of the alchemist Hilda in the game, Graf’s male character, Tavish, goes for the guards.  But Tavish’s detailed knowledge of Hilda’s cause of death, coupled with his communicational misunderstandings since he speaks with a Russian accent, makes the guards suspicious.

“We’re going to need to see you three down at the guard house for some questioning,” a guard, portrayed by Irwin, says to Gewecke’s, Graf’s, and Baillie’s characters, the ones at the scene of the crime.

The party could have easily fought the guards on this for ever suspecting that they would harm Hilda.  However, they do nothing of the sort and comply, following the guards to the guardhouse.  They use their wits to persuade the guards they did not commit the crime.

“I am a man of the cloth [a cleric].  I help people, not opposite of help,” Tavish says.

“Look at this man’s sweater vest.  Do you really believe anyone in association with him would even commit such a crime?” Baillie’s character, Echo, says.

“I spent the majority of my days babysitting him.  Do you really think I have time for this?” Gwecke’s character Anika says.

The role-playing part of the game is what Irwin loves about this campaign and D&D in general.  She says that D&D has helped her in many ways, including building confidence, improvising, and problem-solving.

“As a creative outlet, I think it’s a really, really cool thing for people to do,” Irwin says.  “It’s just a good way to still be thinking differently in a certain persona. It’s something that you don’t have to worry about being judged for because we’re all in this together and all making this story as one.”

And that seems to be what many women say is the great thing about an all-female campaign: it’s a place where you don’t feel judged and you can be yourself, or whoever you want to be.

So, once these women are finally released from the guardhouse and set off on their quest to find Hilda’s murderer, they know that they can safely dance with a bard, befriend a werewolf, or call down a god to smite their enemies without feeling any pressure to play the game in any particular way.

If you want a picture to show with your comment, go get a gravatar.