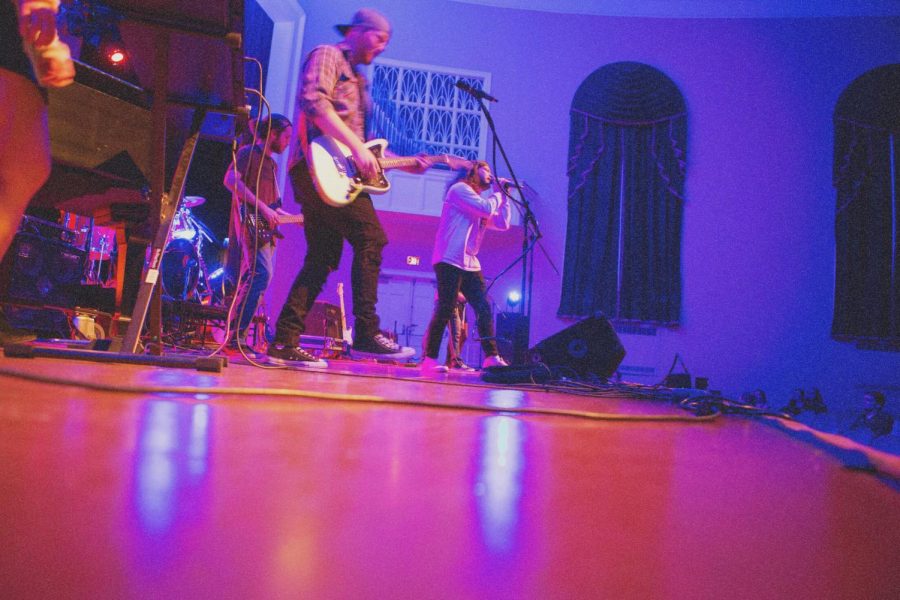 The Creation of “Other Life Forms”

He looks at singer junior Alexis “Lexi” Bardwell through the window leading to the vocal booth as she finishes harmonizing and gives her a nod of confirmation. As the multi-color ProTools software program illuminates, causing reflections of purple, blues, and yellows on his face, Hilty adjusts her vocals on the track and signals for another take.

Months before this small town Iowa band’s first single was set to play through platforms across the internet, some of the O.L.F band members, Lexi, Josh, junior Christian Hughes, sophomore Jerzy Gillon, and junior Jared Hansen sat in the dimly lit recording studio in the basement of Lage, located on Buena Vista University’s campus, finalizing a song.

With the smell of the leftover pieces of cheese pizza in the air, and the endless laughter from everyone overpowering the clicking of the mouse as Josh adjusted tracks, they were building their future.

That night, while making the song, there was no plan going in. The creation was organic and spontaneous. In fact, the band started with a guitar melody created by Christian. Then lyrics were thrown around. More melodies were created. Some lyrics shot down. Melodies forgot or changed. Insignificant debates and the unnecessary comment said. After roughly after 120 hours in the studio, the song came together and “Hold Me Down” was completed.

“The song is about my past relationship,” Jared said.

The song embodies the struggle some face when their significant other prevents them from progressing in life. It adopts an indie funk-pop sound which represents the image of the band as well.

“We were just talking about aliens one time and we were like ‘other life forms,’” said Lexi about the band’s name origin.

During a typical late-night studio session, members of the band were joking with each other when aliens were brought up. After intellectually exploring the topic for a while, it clicked. Given their unique personalities and a wide range of talents, the name seemed perfect.

The band’s journey began during the 2017 fall semester. On the first day of their Rock Ensemble class, the class members were split into two bands. Sophomore Sam McLachlan on the drums. Junior Jack Fordyce on the bass. Jared on the keyboard. Christian on the guitar. Lexi, Josh, and Jerzy singing. Later, sophomore Nathan Ladehoff joins and becomes the second guitarist.

The band had been practicing every Wednesday night to prepare for the semester ending concert held as part of the class. They realized how in tune they were with each other and how much excitement was radiating from them while playing. The band was formed soon after.

“Hold Me Down” was first performed live on Jan. 24 during the band’s first concert at Malarky’s Pub in Storm Lake. Band members describe the experience of playing an original song as thrilling. They could express themselves through the beat of the music, as the crowd cheered them on. They decided they wanted to take things a step further.

“We’ve been talking about it for so long, and that was one of the first songs we made together when we became close friends last semester,” said Jerzy.

O.L.F sent their song to Forte Studios to have the song mastered, the process in which the song is well edited. They paid a fee of $20 to Distrokid, which is a distribution website that helps artists get their songs on music platforms. They then received the release date and anxiously waited for the day their song would go public — March 1, 2018

When the song was set to be released across all platforms, they wanted to share the moment together.

“It’s cool to be able to share the experience with everyone else (because) we have multiple people who are a part of it. We can talk about it with each other, and we can be excited together,” said Lexi.

They bandmates met up and eagerly waited for the play button to be pushed to hear the head-bopping guitar intro. Once Josh’s voice filtered through the speakers, reality set in, and celebration commenced.

“Yeah, all of our hard work was on one stereo track. Not 70 files on a ProTools project,” said Josh.

Each band member shared the same thoughts about seeing their cover photo on the bottom left corner where the name of the song and band displayed on a black background. They had made it to Spotify.

Having their song on a platform widely known was different for them. They were excited to finally be heard and for people to hear.

“It’s kind of nerve-racking. It’s cool, but it’s scary because I want it to be successful. I want to see what it will do,” said Christian.

The band is already working on its next song and getting it ready to be mastered. They plan to release an EP and perform live at more events in the future. And, while they are excited about the Spotify release and the potential for future success, they are most grateful that they are doing it all together.

“Everyone always talks about how they want to become famous. They want to become stars. It’s fun to be able to put yourself out there and have those opportunities,” Jerzy said. “But we wouldn’t be there if we didn’t have each other. That’s exciting.”